The Evangelical Lutheran Synod teaches that the Bible is the only authoritative and error-free source for doctrine. It subscribes to the Lutheran Confessions (the Book of Concord) not in-so-far-as but because it is an accurate presentation of what Scripture teaches. It teaches that Jesus is the center of Scripture and the only way to eternal salvation, and that the Holy Spirit uses the gospel alone in Word and Sacraments (Baptism and Holy Communion) to bring people to faith in Jesus as Savior and keep them in that faith, strengthening them in their daily life of sanctification.

There are approximately 19,945 baptized members[1] in 142 established congregations and 12 mission churches. The current president is the Rev. John Moldstad, M.Div., S.T.M., who has been serving since 2002. Note that the ELS uses the term synod differently from the Evangelical Lutheran Church in America and is a separate denomination. 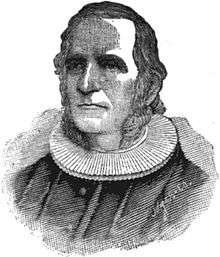 In 1993, the ELS and WELS, working with a number of other worldwide Lutheran churches, some of which had been founded through mission work by both synods, founded the Confessional Evangelical Lutheran Conference (CELC).

The Norwegian heritage of the ELS is evident in this hymnal, although a broader ethnicity is clearly represented. From the indexes located in the back of the hymnary, on pages 926ff entitled "Translated Hymns", it is clear that the majority of the hymns come from German, Scandinavian and Latin sources, however Greek, Czech, French, and other sources are also present.

The cover of this hymnary is black with a gold imprinted logo on the front cover. The logo used is a Latin cross with budded arms superimposed over a lyre, on a diamond-shaped background. Inside these covers one finds more than hymn texts: The Church Year is summarized; followed by the full texts of the Augsburg Confession; the texts of the Apostles' Creed, the Nicene Creed, and the Athanasian Creed; and the Small Catechism by Dr. Martin Luther. Prayers are included as well as four different rites of The Divine Service. The Divine Service: Rite One is based on the Danish Ritual of 1685; The Divine Service Rite Two is from the Common Service from 1888; The Divine Service: Rite Three is a new setting by Dr. Alfred Fremder; and The Divine Service: Rite Four is the Lutheran "Chorale Mass".[2] Other services included here are The Office of the Prime, Matins, Vespers, Compline, and others. A Service of Private Confession and Absolution is also included. Psalms, canticles, and other resources are also found here.

While most American Lutherans are familiar with a joint confession of sins followed by a spoken absolution from the pastor, this hymnary features an optional Individual Absolution (on page 43). Before each worshipper hears the word of absolution, the pastor says, "Upon this your confession, come forward to the altar of the Lord and receive the declaration of the forgiveness of all your sins. The communicants come forward and kneel at the altar rail."

A total of 602 hymns appear in this work. Some appear merely as lyrics with only a suggested tune listed, others include musical notation. The text is enriched by language like that in the New King James Version. 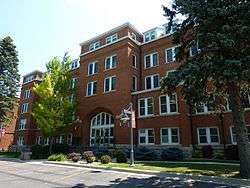 In 1927, the ELS formed Bethany Lutheran College in Mankato, Minnesota. In 1946, it established its own seminary, also in Mankato, called Bethany Lutheran Theological Seminary. Throughout its history, ELS congregations have actively sponsored Christian elementary schools. The synod carries on an active home mission program and now has more than 140 congregations in many states. It also has foreign missionaries laboring in Peru and Chile in South America and in Ukraine, Latvia, and Czech Republic in Eastern Europe.