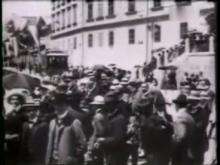 The oldest preserved film recordings of Ljubljana, with a depiction of the Ljubljana tram (at 1:35 and 2:50), streets, and a celebration. Salvatore Spina Company, Trieste, 1909.[1]

In the post-World War II era, many Yugoslav towns and cities with tram systems took out their systems, as they took up a lot of space in an era when it was needed for an increasing number of automobiles.[4] In its final form, established in 1940, the system reached length of 18.5 kilometres (11.5 mi).[5] Soon after the last day of operation the tracks were dismantled and the cars were transferred to Osijek and Subotica.[6] Reintroduction of an actual tram system to Ljubljana has been proposed repeatedly in the 2000s.[7][8]

Picture of a station from Ljubljana M1.

In the openBVE railway simulator, there is a new network of Ljubljana Tramlink (Stadtbahn) system (at the bveroli.atw.hu page). The M1 line runs underground (under the downtown), the second line will run on the train track between Ljubljana Main Station and Vizmarje Station. The railcars are TW6000 engines.