Dravlje (pronounced [ˈdɾaːu̯ljɛ]; German: Draule[2][3]) is a former village in the City Municipality of Ljubljana, the capital of Slovenia.

Dravlje is an elongated settlement at a transition from gravelly to clay soil that also corresponded to a border between cultivated fields (to the east) and meadows (to the south and west).[1][4] The older houses extend to Zgornja Šiška.[1] The former fields extended to the railroad to Upper Carniola but were mostly developed with new construction after the Second World War. Today's streets in the neighborhood correspond to the old farm roads between the fields.[4]

Dravlje was annexed by the City of Ljubljana in 1953, ending its existence as an independent settlement.[6] 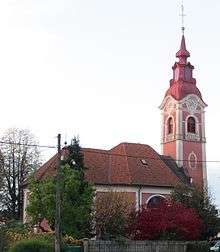 A Baroque church dedicated to Saint Roch stands at the north end of the former village. It was formerly a popular pilgrimage destination. The church was built starting in 1646 (but not completed until 1682)[1] in thanksgiving for the end of a plague epidemic that lasted several years. From 1956 to 1991, the south wall of the church contained four statues of saints that were invoked against the plague (Saint Roch, Saint Urban, Saint Sebastian, and the Virgin Mary). They are the work of Matej Tomec (1814–1885) and were removed from the chapel-shrine on Klagenfurt Street (Slovene: Celovška cesta)[4] when it was destroyed in 1956.[7] The shrine, which dated from 1645 and had been renovated in 1874, was rebuilt after the collapse of communism in 1991[7] and the statues were returned to it. There is a linden-lined boulevard leading to the cemetery next to the church.[4]

This article is issued from Wikipedia - version of the 9/20/2014. The text is available under the Creative Commons Attribution/Share Alike but additional terms may apply for the media files.