Zgornji Kašelj (pronounced [ˈzɡoːɾnji ˈkaːʃəl]; in older sources also Gorenji Kašelj,[2] German: Oberkaschel[2]) is a formerly independent settlement in the eastern part of the capital Ljubljana in central Slovenia. It lies on a terrace above the left bank of the Ljubljanica River and extends west to Vevče and the source of Bajer Creek.[1] It was part of the traditional region of Upper Carniola and is now included with the rest of the municipality in the Central Slovenia Statistical Region.[3] The western part of the settlement was known as Dravlje, but this name passed out of use in the 20th century.[1]

In 1516 and 1517 an estate owned by Jakob Logar was recorded in Zgornji Kašelj.[1] Zgornji Kašelj was annexed by the City of Ljubljana in 1982, ending its existence as an independent settlement.[5] 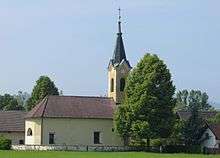 The church in Zgornji Kašelj is dedicated to Saint Andrew (Slovene: sveti Andrej). The church was first mentioned in written sources in 1520, when it was consecrated by Bishop Natalis de Turre. The church acquired its present form in the 18th century, and the altars date from the second half of the 19th century. The church has a choir railing with fine Rococo carving, which is said to have come from the Ursuline Church of the Holy Trinity in Ljubljana. The church contains a painting of Saint Agnes by Anton Cebej. A Roman gravestone is built into the exterior wall of the chancel.[1]

Notable people that were born or lived in Zgornji Kašelj include:

This article is issued from Wikipedia - version of the 3/14/2015. The text is available under the Creative Commons Attribution/Share Alike but additional terms may apply for the media files.