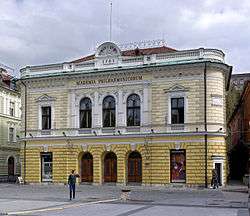 The Slovenian Philharmonic Orchestra (Simfonični orkester Slovenske filharmonije) is a Slovenian orchestra based in Ljubljana. Its primary concert venues are the Marjan Kozina Hall of the Philharmonic Hall, Ljubljana, at Congress Square (Kongresni trg) and the Gallus Hall of the Cankar Hall at Republic Square (Trg republike) in Ljubljana.

The roots of the orchestra trace back to 1701, to the founding of the Academia Philharmonicorum, which performed oratorios and other works of the era. This organisation then became the Philharmonic Society (Filharmonična družba) in 1794. On 23 October 1908, the Filharmonična družba officially merged with the Glasbena matica (The Music Society) to form the first incarnation of the Slovene Philharmonic Orchestra, which lasted from 1908 to 1913. In 1947, the re-establishment of a new incarnation of the orchestra was initiated. The new version of the orchestra gave its first concert on January 13, 1948, conducted by Salvador Bacarisse and attended by composer Marjan Kozina, who became the first administrator of the Slovene Philharmonic Orchestra.