The Tacen Whitewater Course is a venue for canoe and kayak slalom competition in Tacen, Slovenia, a suburb of Ljubljana. Located on the Sava River, eight kilometers northwest of the city center, it is known locally as Kayak Canoe Club Tacen (Slovene: Kajak kanu klub Tacen). The course played an important role in development of the sport during the past six decades. In 1939, when its first competition was held, it was a natural rapid at the base of a dam in the Sava River. In 1990, after many upgrades, it was given a concrete channel and the features of a modern Olympic-style slalom course.[1] The course now starts in the lake behind the dam, and the spillway is the first drop. Tacen hosts a major international competition almost every year, examples being the 1955, the 1991, and the 2010 Championships. 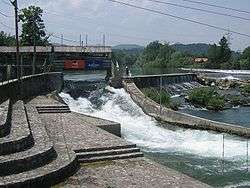 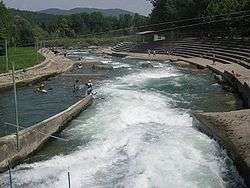 Looking down on the spillway drop from the covered bridge.

The engineered part of the course is only 170 meters long. To increase its length to 275 meters, the course is extended upstream into the lake behind the dam and downstream into the natural flow of the Sava River. The upstream extension means that each paddler must begin the race with an 8-second flat-water sprint and reach the top of the spillway at maximum speed. That plus the usual upstream gate at the bottom of the spillway make for a challenging start, unlike that of any other venue in the international competition circuit.