Talakaveri (Kannada: ತಲಕಾವೇರಿ), is the place that is generally considered to be the source of the river Kaveri. It is located by Brahmagiri hill (not to be confused with the Brahmagiri range further south) near Bhagamandala in Kodagu district, Karnataka, 1,276 m. above sea level. However, there is not a permanent visible flow from this place to the main rivercourse except during the rainy season.

A tank or kundike has been erected on a hillside by kodavas, at the place that is said to be the origin. It is also marked by a small temple, and the area is frequented by pilgrims mainly it is the worship place of kodavas. The river originates as a spring feeding this tank, which is considered to be a holy place to bathe on special days. The waters are then said to flow underground to emerge as the Kaveri river some distance away. The temple has been renovated extensively by the state government recently [2007].

On Cauvery changrandi day (the first day of Tula Masa month , according to the Hindu calendar, which normally falls in mid October) thousands of pilgrims from neighboring flock to the river's birthplace to witness the rise of the fountainhead, when water gushes up from the spring at a predetermined moment. The cauvery changrandi (Sacred bath in the Tula month) is observed across pilgrim towns in Kaveri's banks.[1]

Talakaveri is about 8 km away from Bhagamandala and 48 km from Madikeri. 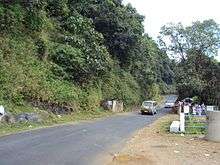 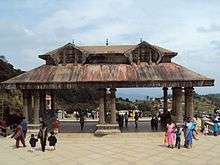 The temple here is dedicated to Goddess Kaveriamma. Other deities worshipped here are Lord Agasthiswara, which denotes the link between Kaveri and Sage Agasthya[2] and Maha Ganapathi.

The legend goes that the Kaveri river was held in a Kamandalu (a container of sacred water) by Sage Agastya. Vinaayaka (Lord Ganesha) took the form of a crow and perched on the kamandalu of Agasthya when Agasthya was meditating. When Agastya realised this, he shooed away the crow. But the devine crow tipped the kamandalu and toppled it. Out poured Kaveri which started flowing. The crow disappeared and in its place stood a small boy. Agasthya thought that the boy was playing some prank and clenching both his fists, went to pound the head of the small boy. But the boy escaped and Agasthya gave chase. Finally the boy vanished and Lord Ganesha showed himself to Agasthya. Agasthya was aghast at the realisation that he had just tried to knock the head of Lord Ganesha himself. As atonement, he knocked his own head with both of his clenched fists. 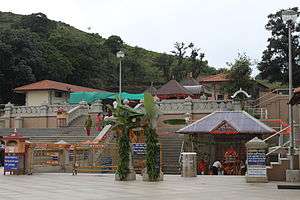 Talakaveri temple after renovation in 2010 by the state government

The link between Kaveri and Lord Ganesha also extends to Srirangam as well, in Lord Ganesha's role in setting up the Ranganatha temple there. The temple at Tirumakudalu Narasipura (confluence of Kabini, Kaveri and the legendary Spatika Sarovara)) is also dedicated to Agasthiwara.

History of the temple priests of Talakaveri

It is believed that Mayura Varma, and Narasimman the Kadamba King who ruled vast areas of southern and central India in the 4th Century A.D. brought Brahmins from Ahi Kshetra (or Ahichatra) and put them in-charge of various temples in Tulu Nadu. Ahi Kshetra is mentioned in the Mahabharata as lying north of the Ganges, and as being the capital of Northern Panchala. It is apparently the Adisadra of Ptolemy, and its remains are visible near Ramnagar in Tahsil Aonla in Bareilly district.[3]

The Brahmins who first landed in Shivalli in Tulunadu and then spread across 31 villages came to be known as Shivalli Brahmins or Tulu Brahmins. It is from Shivalli and Tulu Brahmins, that the priests of Talakaveri temple have come from.

The beginning of the Achar family in Talakaveri starts ten generations or about 220 to 230 years age before which it was worshiped only by kodavas and the priests being amma kodavas A Brahmin named Venkappayya and his two brothers, along with their families came to Talakaveri on a pilgrimage. Lingaraja the First was the ruler of Kodagu. One night God appeared in Lingaraja's dream and indicated that there was a Brahmin family currently visiting Talakaveri. God commanded Lingaraja to appoint this Brahmin to be the priest at the temple. After the king arose from his dream, he sent for this Brahmin family. The king's messengers found Venkappayya in Talakaveri and informed him about the king's desire. Venkappayya accompanied the king's messengers from Talakaveri to Madikeri, a distance of about 24 miles to meet the king.

The Brahmagiri hill is situated right beside the temple. There are a series of steps leading to the top of the hill. From there, one can have a 360 degree view of the surrounding hills.