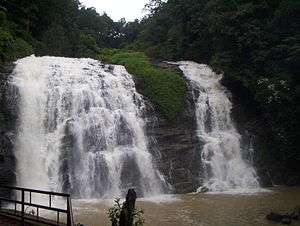 Abbey Falls (also spelled Abbi Falls and Abbe Falls) (Kannada: ಅಬ್ಬೆ ಜಲಪಾತ Abbe jalaphatha) is in Kodagu, in the Western Ghats in Karnataka. It is located 8 km from the Madikeri, 268 km from Bangalore and 122 km from Mysore.

The river is part of the early reaches of the river Kaveri. Flow is much higher during the monsoon season.

The waterfall is located between private coffee plantations with stocky coffee bushes and spice estates with trees entwined with pepper vines. A hanging bridge constructed just opposite the falls.

The falls was earlier called Jessi falls named after a British officer's wife. However, the place was a thick jungle area back then. Years later, the beautiful waterfall was discovered by Mr. Neravanda B.Nanaiah who bought the place from the government and converted it into a coffee and spices plantation that is surrounding the waterfall today.

The rise in tourists influx over the years has taken a huge toll on the natural beauty of the place and resulted in polluted water that stinks during the summer season and unaccountable amount of plastic littering throughout the estate and the river.

From Madikeri the waterfall is accessible by a well laid road till the coffee estate gate. Thereon, a small trek through the coffee and spices plantations leads to the waterfalls. The roar of the falls can be heard from the road.