Bhagamandala is a pilgrimage place in Kodagu district of South Indian state of Karnataka. 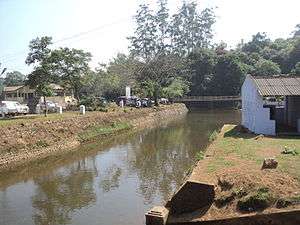 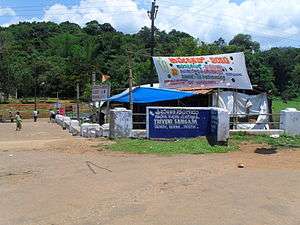 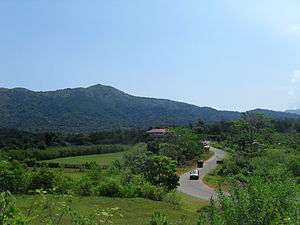 View of Mt.Thavoor and Hotel Mayura Kauvery from the winding road above

Bhagamandala is situated on the river Kaveri in its upstream stretches. At this place, the Kaveri is joined by two tributaries, the Kannike and the mythical Sujyoti river. It is considered sacred as a river confluence (kudala or triveni sangama, in Kannada and Sanskrit respectively). Similarly the other related place is Udhaka mandala(English name: Ooty) which means land beside water body in Kannada and Sanskrit respectively.

It is a common practice for pilgrims to take a dip in the triveni sangama and perform rituals to their ancestors before proceeding to Talakaveri, the birthplace of Kaveri. During Tula Sankramana which falls on October 17 or 18th, pilgrims assemble here in large numbers.

A short distance from the triveni sangama, there is a famous temple known as Sri Bhagandeshwara temple, where Bhagandeshwara (Ishwara), Subramanya, Mahavishnu and Ganapati idols are installed. This place is also known as Bhagandeshwara Kshetra, from which the name Bhagamandala is derived. The temples in this area are built in Karavali(West Coast) style.

During 1785–1790, the area was occupied by Tipu Sultan. He renamed Bhagamandala to Afesalabad. In 1790 King Dodda Vira Rajendra took Bhagamandala back into an independent Kodagu kingdom.

Bhagamandala is located about 33 km from the district headquarters Madikeri and is connected by paved roads from Madikeri, Virajpet and nearby places in Karnataka and Kerala. Government and private buses are available on all of these routes.

A short distance from Bhagamandala is the temple at Padi, which houses the deity Lord Igguthapp and is considered by many Kodavas to be the most sacred shrine in their homeland.

One more temple at Aiyangeri by name "CHINNATHAPPA",which houses the deity Lord Sri Krishna,considered by the people of the village to be the most sacred shrine in their home land. There is a festival once a year in the month of February or March, where the "Golden Flute" will be brought out from the temple. 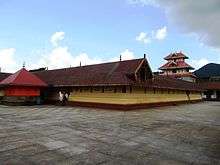 Mt.Thavoor is a towering peak overlooking Bhagamandala,and Mt.Koppatti, which may be considered its twin peak is nearby and both these serve as fantastic trekking routes for anyone wishing to savour the mesmerising beauty of the Shola forest range.