Not to be confused with Srirangam.

Srirangapatna (also spelled Shrirangapattana; anglicized to Seringapatam during the British Raj) is a town in Mandya district of the Indian state of Karnataka. Located near the city of Mysore, it is of religious, cultural and historic importance.

Although situated a mere 15 km from Mysore city, Srirangapatna lies in the neighbouring district of Mandya. The entire town is enclosed by the river Kaveri to form a river island, northern half of which is shown in the adjacent image. While the main river flows on the eastern side of the island, the Paschima Vaahini segment of the same river flows to its west. The town is easily accessible by train from Bangalore and Mysore and is also well-connected by road, lying as it does just off the Bangalore-Mysore highway. The highway passes through this town and special care was taken to minimize any impact on the monuments. 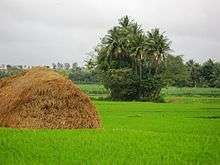 The town takes its name from the celebrated Ranganathaswamy temple which dominates the town, making Srirangapatna one of the most important Vaishnavite centers of pilgrimage in south India. The temple was built by the Ganga dynasty rulers of the area in the 9th century; the structure was strengthened and improved upon architecturally some three centuries later. Thus, the temple is a medley of the Hoysala and Vijayanagar styles of temple architecture.

The presence of the Kaveri River is in itself considered auspicious and sanctifying. The Paschima Vaahini section of the Kaveri at Srirangapatna is considered especially sacred; the pious come from far and wide to immerse the ashes of the departed and perform obsequies to their ancestors in these waters. 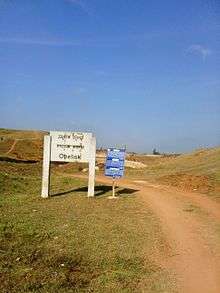 Srirangapatna has since time immemorial been an urban center and place of pilgrimage. During the Vijayanagar empire, it became the seat of a major viceroyalty, from where several nearby vassal states of the empire, such as Mysore and Talakad, were overseen. When, perceiving the decline of the Vijayanagar empire, the rulers of Mysore ventured to assert independence, Srirangapatna was their first target. Raja Wodeyar vanquished Rangaraya,[2] the then viceroy of Srirangapatna, in 1610 and celebrated the Navaratri festival in the town that year. It came to be accepted in time that two things demonstrated control and signified sovereignty over the Kingdom of Mysore by any claimant to the throne:

Srirangapatna remained part of the Kingdom of Mysore from 1610 to after India's independence in 1947; as the fortress closest to the capital city of Mysore, it was the last bastion and defence of the kingdom in case of invasion.

Srirangapatna became the de facto capital of Mysore under Hyder Ali and Tipu Sultan.[3][4] When Tipu finally dispensed with the charade of deference to the legitimate Wodeyar Maharaja who was actually his captive, and proclaimed the "Khudadad State" under his own kingship, Srirangapatna became de jure the capital of this just and ably managed kingdom. In that heady period, the state ruled by Tipu extended its frontiers in every direction, encompassing a major portion of South India. Srirangapatna flourished as the cosmopolitan capital of this powerful state. Various Indo-Islamic monuments that dot the town, such as Tipu Sultan's palaces, the Darya Daulat and the Jumma Masjid (Friday congregational mosque), date from this period.

Srirangapatna was the scene of the last and decisive battle fought between Tipu Sultan and a combined force of 50,000 men provided equally by the Nizam of Hyderabad and the East India Company under the overall command of General George Harris. This battle was the last engagement of the Fourth Anglo-Mysore War. The Battle of Seringapatam, 1799, was truly momentous in its historic effects.

At the battle's climax, Tipu Sultan was killed within the fort of Seringapatam, betrayed by one of his own confidants; the spot where he ultimately fell is marked by a memorial. For the last time in history, Seringapatam had been the scene of political change in the Sultanate of Mysore. The joint forces of the victorious army proceeded to plunder Seringapatam and ransack Tipu's palace. Apart from the usual gold and cash, innumerable valuables and objets d'art, not excepting even the personal effects of Tipoo Sultan, his rich clothes and shoes, sword and firearms, were shipped to England.

While most of this is now to be found in the British Royal Collection and in the Victoria and Albert Museum, some articles have occasionally become available at auctions and have been retrieved for their native land. The sword of Tipu Sultan has been acquired by Vijay Mallya, a liquor baron from Karnataka, who purchased the same at a Sotheby's auction.

Much of the site of the Battle is still intact including the ramparts, the Water Gate, the place where the Tippu Sultan's body was found, the area where the British prisoners were held and the site of the destroyed palace.

Tipu's Tiger, an automaton now in the Victoria & Albert Museum, was captured at the battle.

The Ranganthaswamy Temple – usually referred to as "Sri Ranganathaswamy" – is dedicated to Ranganatha, a manifestation of Vishnu. It is one of the five important pilgrimage sites along the river Kaveri for devotees of Ranganatha. These five sacred sites are together known as Pancharanga Kshetrams in Southern India. Since Srirangapatna is the first temple starting from upstream, the deity is known as Adi Ranga (lit; "first Ranga"), and the town of Srirangapatna, which derives its name from the temple, is located on an island in the river Kaveri.

The Dariya Daulat Palace (Summer Palace) is set amidst beautiful gardens called Daria Daulat Bagh. Tippu Sultan built this palace in 1784. The palace is built in the Indo-Sarcenic style in mostly made of teakwood. The palace has a rectangular plan and is built on a raised platform.

The Gumbaz is an impeccably detailed mausoleum and houses the remains of Tipu Sultan, his father Hyder Ali and his mother Fatima Begum among beautifully manicured gardens. Various tombs of other relatives surround the gumbaz, some with small signs offering guidance on which specific individuals are buried here. The outer gumbaz columns are made of amphibolite, a very dark rock that exudes a somber richness. Handcrafted door frames covered in a deep lacquer finish lead into an inner tomb illuminated only by natural light. All visitors are welcome inside, and even encouraged to enter by the friendly doormen. 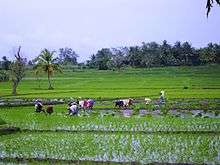 The Garrison Cemetery is located in Seringapatam, on the banks of the river Cauvery, about 300m from the Bangalore Mysore Highway. It has about 307 graves of the European officers killed in the final assault on Tippu Sultan in 1799, and their family members. Among the graves, there are 80 graves of the officers of the Swiss Regiment de Meuron, and the rest of the graves are their family members.[7][8]

The Scott’s Bungalow is located in Seringapatam on the banks of the river Cauvery, at about half a mile from the Mysore Gate of the Seringapatam gate.[9] The bungalow was the residence of Col. Scott, an officer of the Madras Army who took part in the Siege of Seringapatam in 1799. The bungalow is associated with the legend and tradegy of Col. Scott. The story of Scott’s Bungalow is lamented in a poem by Walter Yeldham called the The Deserted Bungalow, published in 1875.[8][10]

Between the Garrison Cemetery and Scott’s Bungalow a path leads to house on the river banks. This house is known as Lord Harris's House or The Doctor's Bungalow or Puraniah's Bungalow. This house was the residence of General Harris, for a short time after the Siege of Seringapatam in 1799, and went on to become headquarters of the commanding officer of Seringapatam. In 1809, the house was the scene of a mutiny by officers of the Madras Army, led by Col. Bell, against Sir. George Barlow, the Governor of Madras. Purnaiah, lived in this house after his retirement from service in 1811, and died there on 28 March 1812. A tablet on the wall records the connection of Lord Harris and Puraniah to the house.[11] 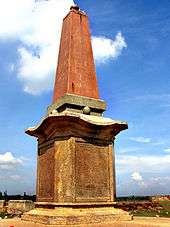 The fortress is situated in the west of the island, and is surrounded by double walls. The point at which the British broke through the walls, and thus Tipu Sultan's troops surprised, is marked by an obelisk. Also highlighted is the place where Tipu Sultan was killed by the British forces. In addition, the dungeon in which the Mysore rulers had imprisoned British soldiers.

This was the place where Tipu Sultan used to imprison all the British officers. It is located near the death place memorial of Tipu Sultan and is surrounded by gardens on all four sides. Lord Bailey was the only British officer who died in that place and could not make it through the tough conditions and so it was later named after him.

Near the town is the Ranganathittu Bird Sanctuary, which is the breeding site for several bird species, including the painted stork, open-billed stork, black-headed ibis, river tern, great stone plover and Indian shag.