Main street of Magome-juku in summer

Keisai Eisen's print of Magome-juku, part of the The Sixty-nine Stations of the Kiso Kaidō series 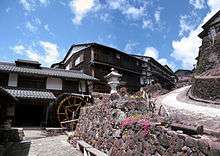 Magome-juku (馬籠宿, Magome-juku) was the forty-third of the sixty-nine stations of the Nakasendō, an ancient road that connected Kyoto and Edo during the Edo period. It was also the last of eleven stations along the Kisoji, which was the precursor to a part of the Nakasendō, running through the Kiso Valley. This well-preserved section of the old route is in the present-day city of Nakatsugawa, Gifu Prefecture, Japan. 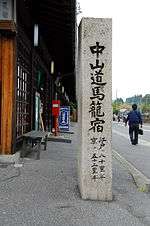 The mileage pole of Magome-juku around the street entrance.

As a post town, it was relatively prosperous and cosmopolitan, with a currency-based economy. It fell into obscurity and poverty, however, after the completion of the Chūō Main Line railway, which did not pass through Magome. In recent decades, it has been restored to its appearance as an Edo period post town and is now a popular tourist destination.

The central feature of Magome is its restored row of houses along the former post road, which runs at a slope between the town's low and high ends. Most were built for common people in the mid-18th century, with shops and inns for travelers along the Nakasendō. A quiet portion of the original highway has been preserved between Magome-juku and Tsumago-juku, the next post town, which was also restored. It provides for a pleasant walk through forests and past waterfalls. Bus service is also provided between the two post towns, allowing visitors to easily start at either end of the path.[1]

Records show that in 1843, Magome-juku had 717 residents and 69 buildings. Among the building, there was one honjin, one sub-honjin, and 18 hatago.

Magome was the birthplace and childhood home of noted author Shimazaki Tōson, who wrote about the Kiso region in his most famous novel, Before the Dawn, between 1929 and 1935. He is buried in the town's small cemetery.

The town also offers a fine view of Mount Ena, which rises 2,190 m (7,185 ft). Panoramic views of the surrounding mountains may be enjoyed from a vista above the main parking lot at Magome's upper end.

View from the top of the hill in Magome-juku

This article is issued from Wikipedia - version of the 7/29/2014. The text is available under the Creative Commons Attribution/Share Alike but additional terms may apply for the media files.