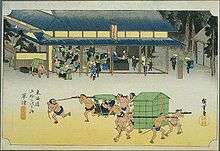 Hiroshige's print of Kusatsu-juku in the 1830s, part of the Fifty-three Stations of the Tōkaidō series

Coming from Moriyama-juku, the borders of Kusatsu-juku started at the banks of the Kusatsu River to the present-day Miya-chō in Kusatsu. The famed ukiyo-e artist Hiroshige traveled through the post station using both the Tōkaidō and the Nakasendō in order to create woodblock prints.