This article is about the place in Tokyo. For the place in Osaka written with the same kanji in Japanese, see Nipponbashi. 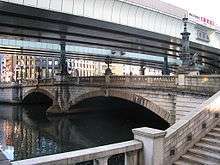 Lion at the Nihonbashi 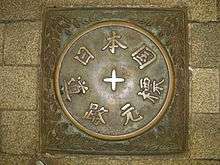 Kilometer Zero is on the middle of Nihonbashi.

Nihonbashi (日本橋, literally Japan Bridge), or Nihombashi, is a business district of Chūō, Tokyo, Japan which grew up around the bridge of the same name which has linked two sides of the Nihonbashi River at this site since the 17th century. The first wooden bridge was completed in 1603. The current bridge designed by Tsumaki Yorinaka was constructed of stone on a steel frame dates from 1911.[1] The district covers a large area to the north and east of the bridge, reaching Akihabara to the north and the Sumida River to the east. Ōtemachi is to the west and Yaesu and Ginza to the south.

The Nihonbashi district was a major mercantile center during the Edo period: its early development is largely credited to the Mitsui family, who based their wholesaling business in Nihonbashi and developed Japan's first department store, Mitsukoshi, there. The Edo-era fish market formerly in Nihonbashi was the predecessor of today's Tsukiji fish market. In later years, Nihonbashi emerged as Tokyo's (and Japan's) predominant financial district.

The Nihonbashi bridge first became famous during the 17th century, when it was the eastern terminus of the Nakasendō and the Tōkaidō, roads which ran between Edo and Kyoto. During this time, it was known as Edobashi, or "Edo Bridge." In the Meiji era, the wooden bridge was replaced by a larger stone bridge, which still stands today (a replica of the old bridge has been exhibited at the Edo-Tokyo Museum). It is the point from which all distances are measured to the capital; highway signs indicating the distance to Tokyo actually state the number of kilometers to Nihonbashi.

The area surrounding the bridge was burned to the ground during the massive March 9-10, 1945 bombing of Tokyo, considered the single largest air raid in history. Despite careful maintenance and restoration, one area of the bridge still has scars burned into the stone from an incendiary bomb. It is one of the few traces left from the fire bombing that leveled most of Tokyo.

Shortly before the 1964 Summer Olympics, an expressway was built over the Nihonbashi bridge, obscuring the classic view of Mount Fuji from the bridge.[2] In recent years, local citizens have petitioned the government to move this expressway underground. This plan was supported by Prime Minister Junichiro Koizumi but opposed by Tokyo Governor Shintaro Ishihara. If implemented, the construction costs are expected to total ¥500 billion (about US$4+ billion). 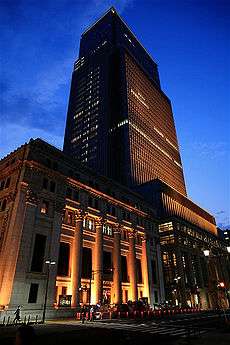 Companies based in Nihonbashi

Organizations based in Nihonbashi

As the starting point for the five routes of the Edo period, Nihonbashi provided easy access to many parts throughout ancient Japan.