Manchester's mayoral race is non-partisan, occurs every two years, and there are no term limits. The current mayor, Frank Guinta, has served since 2006. Incumbent Mayor Guinta stated in the spring that he would not run for reelection and subsequently announced that he will run to represent New Hampshire's 1st congressional district in the United States House of Representatives in 2010 challenging incumbent Carol Shea-Porter.[3]

The first city election in Manchester, New Hampshire occurred on August 19, 1846, with the election of Hiram Brown. 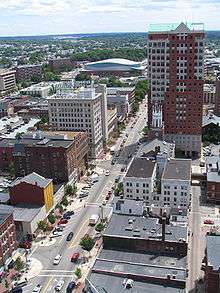 The Manchester Board of Aldermen is made up of 12 wards seats and 2 at-large seats and their election was also held at the same time as the Mayor.

This article is issued from Wikipedia - version of the 2/1/2012. The text is available under the Creative Commons Attribution/Share Alike but additional terms may apply for the media files.