The 2016 New Hampshire Republican presidential primary, which took place on February 9, was the second major vote of the cycle. Donald Trump was declared the winner with 35.3% of the popular vote and picked up 11 delegates, while John Kasich emerged from a pack of candidates between 10-20% to capture second place with 15.8% of the vote and picked up four delegates.[1]

Politico describes the 2016 Republican primary in New Hampshire as a "topsy-turvy" campaign that has seen "an all-out assault" on "establishment" politics.[2]

Donald Trump dominated the polling results,[3] with Chris Christie, John Kasich, Marco Rubio, and Jeb Bush vying to place second and emerge as the leading mainstream alternative to Trump and to Ted Cruz.[4] In November Chris Christie gained the endorsement of the New Hampshire Union Leader.[5] Candidates receiving the endorsement later received a boost of on average 8 points in the polls, but the endorsed candidate only won a Republican primary in half of the elections from 1980 to 2012.[6] But in late January the Boston Globe and the Concord Monitor endorsed Kasich, leading Politico to dub him the winner of the "newspaper primary."[2]

Two major televised gatherings of major candidates took place during the 2015-16 campaign, both took place at the New Hampshire Institute of Politics of Saint Anselm College in Goffstown, New Hampshire.

The 2016 Voters First Presidential Forum was moderated by Jack Heath of WGIR radio, who asked questions of each of the participating candidates based on a random draw.[7] Candidates each had three opportunities to speak: two rounds of questions, and a closing statement.[8] Topics of discussion during the forum were partially selected based on the results of an online voter survey.[9] The facilities were provided by the New Hampshire Institute of Politics and Political Library of St. Anselm College. The forum was organized in response[10] to the top-ten invitation limitations placed by Fox News and CNN on their first televised debates (see descriptions below).

Eleven of the candidates participated: Senators Ted Cruz, Rand Paul, and Marco Rubio participated in the forum via satellite to avoid missing a vote.[11] Three major Republican candidates who did not participate were Donald Trump (who chose not to attend),[7] Jim Gilmore (who missed the cutoff deadline)[7] and Mike Huckabee (who was invited, but did not respond).[7] Mark Everson did not receive an invitation, albeit after a "serious look."[12][13]

The Voters First forum was broadcast nationally[14] by C-SPAN[15] as the originating source media entity, beginning at 6:30 p.m. EDT and lasting from 7 to 9 p.m. The event was also simulcast and/or co-sponsored by television stations KCRG-TV in Iowa, New England Cable News in the northeast, WBIN-TV in New Hampshire,[16] WLTX-TV in South Carolina, radio stations New Hampshire Public Radio, WGIR in New Hampshire, iHeartRadio on the internet (C-SPAN is also offering an online version of the broadcast), and newspapers the Cedar Rapids Gazette in Iowa, the Union Leader in New Hampshire, and the Post and Courier in Charleston South Carolina.[7] There was a live audience, with tickets to the event awarded via a lottery.[10]

One of the highlights of the campaign is when the nonrecognized candidates gather together to introduce themselves to the public at this event, which first was held in 1972.[17] Five candidates participated. They were Stephen Comley, Tim Cook, Walter Iwachiw, Andy Martin, and Joe Robinson.

The eighth debate was held in New Hampshire, the first state to hold primaries, was organized by ABC News and the Independent Journal Review. It was scheduled to be held in the St Anselm's College Institute of Politics.[20] The eighth debate did not feature an undercard event.[21] David Muir and Martha Raddatz were moderaters, along with WMUR political director Josh McElveen and Mary Katherine Ham.[22]

On February 4, 2016, Jeb Bush, Ben Carson, Chris Christie, Ted Cruz, John Kasich, Marco Rubio, and Donald Trump were invited to the debate.[24] Carly Fiorina and Jim Gilmore were not invited as they did not meet the criteria.[25]

The debate was notable for Rubio's poor performance, where he repeated several phrases four times, including once while Christie was criticizing him for it.[26][27] 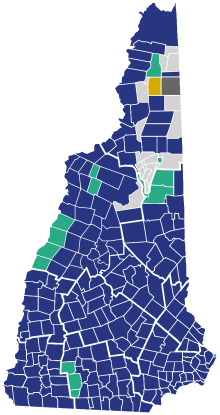 Twenty-six total candidates were on the ballot in the New Hampshire primary.[29] The following notable candidates were listed in five major polls and participated in authorized debates. U.S. Senator Lindsey Graham of South Carolina and former Governors Bobby Jindal of Louisiana and George Pataki of New York withdrew from the race, but remained on the ballot.

The following have been listed in national polls and have participated in at least one nationally televised debate.

The following have been listed in national polls and have participated in at least one nationally televised debate, but withdrew their candidacies before the New Hampshire primary.

The following candidates have not been listed in major independent polls nor participated in Republican party sanctioned debates:

According to exit polls, Trump was able to win over all genders, income levels, and age groups, but his particular strength was among gun-owners, voters worried about the economy and immigration, and voters who described themselves as "dissatisfied" or "angry" at the federal government, a norm within the electorate in a state with a rebellious nature.[62] He also won white voters; the electorate was 96% white. An overwhelming majority of voters supported Trump's proposed Muslim ban.

While a plurality of the 53% of voters with a college degree backed Trump, he managed a 42-13 routing over Cruz among voters without a college degree. Trump swept all voters' family financial situations, but showed considerable strength among those who are "holding steady" or "falling behind." He won 37-15 over Cruz among the 47% of voters who felt betrayed by Republican politicians, and a 62-10 landslide among those 50% of voters who wanted a candidate from outside the political establishment. In terms of party affiliation, Trump won a 33% plurality of registered Republicans, and a 39% plurality of undeclared/independent voters.

The New York Times described Mr. Trump's commanding victory in the Granite State as a "harness [of] working-class fury" and noted Mr. Trump amassed the largest margin of victory in a New Hampshire Republican primary since 2000. In his victory speech, Mr. Trump promised, “I am going to be the greatest jobs president that God ever created,” and that he will "knock the hell out of ISIS."[64]