The 2012 United States presidential election in New Hampshire took place on November 6, 2012 as part of the 2012 General Election in which all 50 states plus The District of Columbia participated. New Hampshire voters chose four electors to represent them in the Electoral College via a popular vote pitting incumbent Democratic President Barack Obama and his running mate, Vice President Joe Biden, against Republican challenger and former Massachusetts Governor Mitt Romney and his running mate, Congressman Paul Ryan.

New Hampshire held its primaries on January 10, 2012. The state is historically the first in the nation to hold presidential primaries, and moved its date up from February after Florida moved its primary date to January 31. Because New Hampshire has a proportional-delegate primary, the state's 12 national delegates will be allocated in proportion to candidates' percent of the popular vote.[1][2]

Incumbent president Barack Obama won all the delegates and was renominated.

A Democratic presidential candidates debate, held at Saint Anselm College in December 2011, was attended by seven candidates; Obama did not participate.[3]

60,659 votes were cast in the primary. Obama won with 49,080 votes. The total votes cast were more than 30 percent fewer than in 1996, the last time that a Democratic president ran for re-election without significant opposition.[4]

Televised debates in New Hampshire were held on January 7, 2012, on ABC News at Saint Anselm College and the following morning on January 8, 2012, on NBC's Meet the Press and MSNBC. All major Republican candidates attended both debates.

In 2012, a record 33 Republican candidates filed to appear on the ballot in New Hampshire, including various single-issue activists, protest candidates, and perennial candidates.[8] For instance, Stewart Greenleaf, who had no interest in becoming President, registered for the ballot to promote the issue of government spending in the Republican Party.[9] Under New Hampshire's lenient ballot access laws, a candidate is only required to pay $1,000 to the state's treasury, and needs no party approval or petitions for placement.[10]

Various newspapers that circulate widely in New Hampshire made endorsements ahead of the New Hampshire primary.[11] While the conservative Union Leader, the only statewide newspaper, endorsed Gingrich, various newspapers endorsed Huntsman, with the Valley News stating that Huntsman was "a candidate whose views are solidly conservative, but not myopically so" and criticizing Romney and Gingrich, stating that "The former has raised the flip-flop to an art form, while the latter has done the same for hypocrisy" and endorsing Huntsman "in the hopes that the cooler heads will prevail in New Hampshire and elsewhere." Romney also received support, including from the Portsmouth Herald of the Seacoast region.[12]

By December 11, Romney had already received the endorsement of Ted Gatsas, mayor of Manchester (New Hampshire's largest city) and former state Senate president, and 58 endorsements from state representatives.[30] According to prominent Romney supporter Thomas D. Rath, a former state attorney general described as a Republican power broker, on the eve of the primary the Romney campaign had been endorsed by 11 of 19 Republicans in the State Senate, 73 or 74 of the Republican state representatives, and eight of the 10 sheriffs, as well as the mayor of the largest city.[26] The New York Times reported that so many officials endorsed Romney that it took a three-page pamphlet mailed to New Hampshire Republicans to list them all. The Times reported that Romney-supporting officials "introduce him at virtually every campaign stop, flood gyms and seniors centers with crowds on short notice and attack his Republican rivals."[26]

Senator John McCain of Arizona, who won the New Hampshire Republican primary in 2000 and 2008 and was the Republican nominee for president in 2008, endorsed Romney following the Iowa caucuses and ahead of the New Hampshire primary at a Manchester rally on January 4,[33] despite prior tension between the two in the 2008 primary race.[34][35]

After Iowa but before the New Hampshire primaries, tea party movement-aligned Buffalo, New York businessman Carl Paladino, the 2010 gubernatorial candidate in nearby New York, supported Gingrich and sharply criticized the rest of the candidates.[36]

Notably, former PA Sen. Rick Santorum gained a disproportionately high number of endorsements (when compared to his pre-Iowa polling in the single digits) in the run up to and including the NH Primary. At one point Santorum led the entire field of GOP candidates in total number of endorsements (until the entrance of Romney and Perry), and finished with more endorsees than even Huntsman who finished third in the race. This was due in large part to the efforts of Santorum's State Co-chairs: Rep. Dan Tamburello, a current member of the NH House of Representatives from Londonderry who spearheaded the effort, Hon. Bill Cahill, a former Governor's Councilor and member of the NH House, and Claira Monier, a notable Republican party activist who was instrumental in Reagan's NH victory in 1980. Sen Santorum's national campaign manager was by Mike Biundo, who was the architect of former Manchester mayor Frank Guinta's surprising 2010 primary upset for the NH 1st Congressional district; Guinta went on to win the NH-1 district in November 2010 in a decisive victory over Democrat Carol-Shea Porter, who never conceded the race. Other notable endorsements for the Senator included Sen. Jim Luther, Sen. Fenton Groen, former candidate for Governor Karen Testerman, Rep Susan DeLemus, and NH Tea-Party luminary Jerry DeLemus. Testerman and the DeLemus' endorsed Rick after having defected from the Bachmann camp. 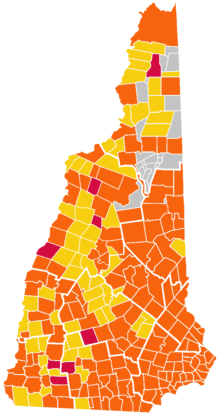 New Hampshire was rated as a Toss Up[45][46][47] to Lean D[48][49] state. Polling showed a consistent single digit polling lead for President Obama.