He was formed at Barcelona, where he played 103 professional games and scored six goals across seven seasons, winning 13 honours including five La Liga titles. In 2016, he joined Borussia Dortmund for €8 million.

Bartra won two European Championships with Spain's under-21 team. He made his senior debut in 2013, and was selected for Euro 2016. 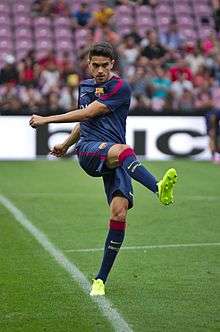 Bartra training for Barcelona in 2014.

Born in Sant Jaume dels Domenys, Tarragona, Catalonia, Bartra joined RCD Espanyol as a child before moving to FC Barcelona's youth system, La Masia, at age 11. After progressing through its ranks, he was promoted to the B-side in 2009.[3]

Bartra made his first-team debut on 14 February 2010, coming on as a substitute for Jeffrén Suárez for the final 30 minutes of a 1–2 loss to Atlético Madrid at the Vicente Calderón Stadium.[4] He started his first La Liga game one year and three months later, playing the entire 0–0 home draw against Deportivo de La Coruña,[5] and scored his first goal on 21 May 2011 to help them come from behind to win it 3–1 at Málaga CF in the season's last round.[6]

In the 2012–13 campaign, Bartra joined the first team squad permanently, but manager Tito Vilanova tended to field Javier Mascherano, Alex Song and Adriano ahead of him,[7][8][9] and played in only 16 games in all competitions. He signed a new three-year contract in March 2014,[10] but remained a third or fourth-choice under new manager Luis Enrique,[11][12][13] making 25 appearances and scoring once as the team won the treble in 2014–15.[14]

On 3 June 2016, Bartra was sold to German club Borussia Dortmund for an estimated fee of €8 million, signing a four-year deal.[15][16] He made his competitive debut on 14 August, playing the entire 0–2 loss against FC Bayern Munich for the DFL-Supercup.[17] 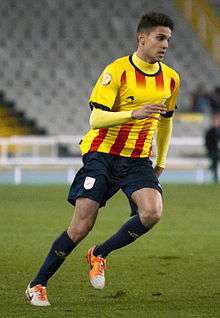 Bartra won 37 caps for Spain at youth level all categories comprised, including 16 for the under-21s. He made his debut for the full side on 16 November 2013, playing the entire 2–1 friendly win in Equatorial Guinea.[18] This game was latter annulled by FIFA as they had not been notified early enough that the referee would be from Equatorial Guinea,[19] and his first valid appearance took place on 8 September 2014 as he came on as a 68th-minute substitute for Sergio Ramos in a 5–1 home triumph against Macedonia for the UEFA Euro 2016 qualifiers.[20]

Bartra is known for his decent pace, passing, heading, and aerial ability. He is also able to play as a right-back, running up and down his flank and contributing to the attacking players.[23]