Pedro scored 99 goals in 320 appearances across all competitions for Barcelona from 2008 to 2015, winning 20 major honours including five La Liga titles and the UEFA Champions League three times. During the 2009–10 season, he became the first player in history to score in six different official club competitions in one season.[3]

Pedro represented Spain in two World Cups and two European Championships, winning once in each tournament.

Pedro was a key player for FC Barcelona B, as the team achieved promotion from Tercera División, making 37 appearances and scoring seven goals.[4] On 12 January 2008 he made his debut for the first team, playing one minute in a 4–0 home win against Real Murcia, but would only amass seven more in his first two seasons combined.

Pedro was a part of the first team's 2008–09 pre-season, and showed early promise, scoring against Hibernian and the New York Red Bulls respectively.[5][6] On 13 August, he started in a 4–0 win against Wisła Kraków for the third qualifying round of the UEFA Champions League.[7] His first match on the group stage of that competition was on 16 September, when he replaced Thierry Henry in a 3–1 home win over Sporting Clube de Portugal.[8]

In Barcelona's treble-winning season in 2008–09 Pedro eventually totalled 14 matches, also appearing in La Liga against Getafe CF,[9] Valencia CF,[10] Real Valladolid[11] and CA Osasuna (0–1 home loss, with Barcelona already crowned champions),[12] totalling 365 minutes. In the campaign's Copa del Rey he played against Benidorm CF[13] and Atlético Madrid, on both occasions for Lionel Messi;[14] in the Champions League final, he played the last minute in the place of Andrés Iniesta.

In 2009–10, manager Pep Guardiola confirmed that Pedro would be definitely promoted to Barcelona's first team, and he responded with a breakthrough year, during which he became the first player to score in six different club competitions during a single season and in the same year.[15] On 16 August, after assisting Xavi with the first goal, he scored his first competitive goal for the first team in the 67th minute, helping to ensure a 2–1 victory over Athletic Bilbao in San Mamés for the domestic Supercup.[16] Later that week he signed his professional contract, running until June 2014 with a buyout clause set at £60 million;[4] in the 2009 UEFA Super Cup against FC Shakhtar Donetsk, he came on as a substitute for Zlatan Ibrahimović in the 80th minute, and went on to net the only goal of the match in extra time.[17]

On 28 September Pedro scored his first goal in the Champions League, after replacing Iniesta at half-time in a 2–0 win against FC Dynamo Kyiv.[18] He continued his hot streak and netted his first in the league, against UD Almería, with a brilliant strike that sealed the 1–0 home triumph;[19] the following month he grabbed a brace in the first leg of the Spanish Cup round-of-32 match at Cultural y Deportiva Leonesa, for a 2–0 win[20] (he also scored in the second leg, a 5–0 home rout).[21]

More and more established in Barcelona's starting lineups, Pedro went on to score another brace in the league, in a 4–2 win against RCD Mallorca.[22] He would continue his scoring touch in the Champions League, netting one of two against Inter Milan.[23] 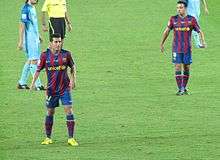 On 16 December, Pedro scored a goal in the semi-final of the FIFA Club World Cup against Atlante FC, in 3–1 win. In doing so, he became the first player ever to score in six different club competitions in one season – the three domestic tournaments, the UEFA Champions League and Super Cup and the Club World Cup.[24] He was later named World Player of the Week by Goal.com after his performances against RCD Espanyol, Atlante and Estudiantes de La Plata of Argentina, respectively.[25]

In an emotional return to his hometown team of CD Tenerife, on 10 January 2010, Pedro came on as a 76th-minute substitute, later helping to Ezequiel Luna's own goal in a 5–0 win – out of respect, he chose not to celebrate.[26] On 10 April he netted the second goal in a 2–0 win against Real Madrid, in his first appearance in El Clásico.[27]

On 14 April, in a league match against Deportivo de La Coruña, opposing goalkeeper Daniel Aranzubia attempted to clear the ball from the top of the 16-yard box, and instead kicked the ball right to Pedro, who shot at goal from 40 yards with his left foot and scored, giving Barça a 2–0 lead in an eventual 3–0 win.[28] He also found the net in a 3–1 defeat in the first leg of Champions League semi-finals, against Inter at the San Siro.[29]

In the last three league matches, Pedro scored for Barcelona, with the Catalans eventually renewing their league supremacy: against Tenerife again (4–1 win),[30] the 3–2 winner at Sevilla FC[31] and against Valladolid (4–0).[32] He completed the 2009–10 season with 53 appearances in all competitions and 23 goals, and, on 9 June, signed a new five-year deal with Barcelona.[33]

Pedro began the 2010–11 campaign firmly established in Barcelona's starting XI. On 29 November 2010, he scored the second goal in a 5–0 home win against Real Madrid, with Barça climbing to the first position in the league.[34] The following month he netted twice at Espanyol in the local derby, in a 5–1 success.[35]

On 20 April 2011, Pedro scored against Real Madrid in the second half of the season's Spanish Cup final, but his goal was disallowed for offside, in an eventual 0–1 extra time loss.[36] On 3 May, against the same opponent, in the Champions League semifinals second leg, he found Iker Casillas' net in a 1–1 home draw (3–1 aggregate win),[37] for his 21st official goal of the campaign; in the Champions League final, he opened the score against Manchester United, in an eventual 3–1 win.[38]

On 5 July 2011 Pedro extended his contract by one year, until 2016.[39] His buyout clause was raised from €90m to €150m. After the purchase of Alexis Sánchez and the emergence of youth players like Isaac Cuenca and Cristian Tello, he featured less during 2011–12, also being afflicted with some injuries;[40] he did finish the season with 13 official goals, scoring a brace in the campaign's domestic cup final, a 3–0 win against Athletic Bilbao.[41] 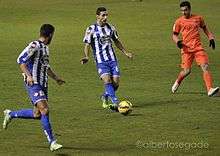 Pedro defending against Deportivo in January 2015

On 16 December 2014, Pedro scored another hat-trick, this time in second leg of Round of 32 in Copa del Rey against Huesca, with Barcelona who recorded a 8–1 victory at Camp Nou.[45]

On 4 June 2015, Barcelona official website announced Pedro has renewed contract until 30 June 2019. His buyout clause will remain at €150 million.[46]

On 6 June 2015, Pedro appeared as an added-time substitute for Barça in the 2015 UEFA Champions League Final, as the club won its fifth European Cup by beating Juventus at Berlin's Olympiastadion.[47] This made Barcelona the first club in history to win the treble of domestic league, domestic cup and European Cup twice.[48] Pedro, Lionel Messi, Andrés Iniesta, Xavi, Gerard Piqué, Sergio Busquets and Dani Alves are the only players to have been a part of both treble-winning teams.[48]

As an extra-time substitute, Pedro scored the winning goal as Barcelona won the 2015 UEFA Super Cup 5–4 against Sevilla in Tbilisi; it was his second winner in a Super Cup, and came in the 115th minute like its predecessor.[49] 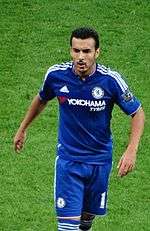 Pedro playing for Chelsea in 2015.

On 20 August 2015, after interest from Manchester United, Pedro joined Premier League champions Chelsea on a four-year contract for £19 million (€26.6M), potentially rising to £21.4 million (€30M) depending on performances.[50][51][52] Three days after signing, he made his debut away to West Bromwich Albion, scoring the first goal of a 3–2 win, Chelsea's first victory of their season, and provided an assist for the second goal, scored by his international teammate Diego Costa.[53] On 19 December, Pedro scored the second goal in a 3–1 win against Sunderland, his first at Stamford Bridge.[54] On 13 February, Pedro scored a brace in a 5–1 victory over Newcastle United.[55]

On 1 July 2016, it was announced that Pedro would switch to the number 11 shirt at Chelsea, vacated by the loan expiration of Alexandre Pato.[56] On 20 August 2016, Pedro made his first start of the season in an away match against Watford, after it was announced that Willian was out with an injury.[57] Pedro then came off the bench to get an assist for Victor Moses in a 3-0 win over Burnley on 27 August.[58] On 23 October 2016, Pedro scored the fastest goal of the season as in the first 30 seconds, he scored the opener of a 4–0 victory over Manchester United.[59] He also defended Antonio Conte, Chelsea F.C.'s manager, who was reportedly accused by Jose Mourinho (his manager from the previous season), Manchester United F.C. manager, of trying to humiliate Manchester United with his actions on the touchline in the closing stages of the game.[60] On 5 November 2016, Pedro scored the last goal and assisted two others in a 5-0 drubbing of Everton F.C. at the Stamford Bridge.[61] On 26 November 2016, Pedro scored the equaliser for Chelsea right before half time, in a game in which they beat Tottenham Hotspur F.C. 2-1.[62]

On 20 May 2010, Pedro was included by Vicente del Bosque in Spain's 23-man squad for the 2010 FIFA World Cup.[63] Nine days later, he made his debut in a 3–2 friendly win against Saudi Arabia, replacing David Silva for the final 30 minutes in Innsbruck, Austria.[64] On 8 June, in the last exhibition game prior to the finals in South Africa, with Poland, Pedro scored his first international goal, and also assisted Fernando Torres in a 6–0 victory at Murcia's Estadio Nueva Condomina.[65]

In the final stages, he appeared in five matches (three as a late substitute): on 7 July, in the semi-final against Germany, he started in place of Torres, who had been performing poorly in earlier matches. In the 82nd minute, with Spain leading 1–0, he attempted to score a goal himself rather than set up an unmarked Torres, although he performed well in the game.[66] Despite this error, he was selected to start in the final, with the national team winning 1–0 against the Netherlands; at the hour-mark, he was replaced by Jesús Navas.

Pedro was part of the Spanish squad which successfully defended their continental crown at UEFA Euro 2012, coming on as a substitute in each of their knockout round matches, including the final where he replaced Silva in the 59th minute of an eventual 4–0 win over Italy.[67]

Pedro scored the first hat-trick of his professional career on 12 October 2012, netting after a Jordi Alba strike in an eventual 4–0 away win over Belarus for the 2014 World Cup qualifiers.[68]