Mark Raymond Kennedy (born April 11, 1957 in Benson, Minnesota), is an American businessman, Republican Party politician, and president of the University of North Dakota. Kennedy previously led the George Washington University Graduate School of Political Management.[1] Before that, he served as a member of the United States House of Representatives from 2001 to 2007. Kennedy did not seek re-election in 2006, instead running for the U.S. Senate. He lost the general election to Democratic–Farmer–Labor nominee Amy Klobuchar.

Kennedy graduated from Pequot Lakes High School in 1975, and St. John's University in 1979. He began his career as a Certified Public Accountant and went on to receive his M.B.A. from the University of Michigan's Ross School of Business in 1983.

Kennedy's business career prior to the U.S. Congress included working for The Pillsbury Company, assisting with their acquisition of Häagen-Dazs and arranging for financing to support their international expansion. As a senior executive at Federated Department Stores, he helped the company position itself for growth to become, as Macy's, the world's leading department store. He was profiled in May 1992's Institutional Investor Magazine, which featured him on its cover as one of “America's top CFOs”. At ShopKo Stores, he was responsible for merchandising, marketing and store management.

In 2000, Kennedy won the Republican nomination for the 2nd district and faced four-term Democrat David Minge. He had never run for political office before. In the closest congressional race of that cycle, Kennedy defeated Minge by 155 votes.

In 2002, although Minnesota didn't gain or lose any districts, Kennedy's 2nd district—a monstrous 28-county district stretching from the southwestern corner of the state to the fringes of the Twin Cities—was dismantled. Its territory was split up among four neighboring districts. Kennedy's home outside Watertown was located just inside the reconfigured 6th district, in the northern suburbs of the Twin Cities.

Kennedy initially expected to face the 6th's three-term incumbent Democrat, Bill Luther. However, the new 6th was somewhat more Republican than its predecessor, and Luther opted to move to the reconfigured 2nd District where he lost to John Kline. Instead, Kennedy faced Janet Robert, a lawyer and longtime Democratic activist. In one of the most expensive congressional races in Minnesota history, Kennedy was reelected with 57% of the vote. In 2004, Kennedy faced child safety advocate Patty Wetterling. Kennedy received 54% percent of the popular vote to Wetterling's 46%.

Klobuchar won the election, receiving 58% of the vote to Kennedy's 38%.

A proponent of free trade, Kennedy voted in favor of in giving the President Fast track Authority and of the Central America Free Trade Agreement.[2]

In Congress, Kennedy supported the Bush tax cuts, he voted for the Medicare Prescription Drug Plan,[3] and the Deficit Reduction Act of 2005.[4] Kennedy's reputation as a reformer was further enhanced by his sponsorship of the line item veto,[5] a lifetime ban on all members of Congress becoming lobbyists,[6] full deductibility of medical expenses,[7] no parole for sex offenders,[8] and Medicare Plan Enrollment Fraud Protection.[9]

Kennedy's record of included partnering with twenty Democrats to lead legislation and having more than half the Democrats in the House co-sponsor bills he introduced. Such bills included authoring the Teacher's for Tomorrow’s Careers Act with New Jersey Democrat Rush Holt,[10] the Fair Care for the Uninsured Act with Illinois Democrat Dan Lipinski,[11][12] Rural Access to Emergency Services Act with North Dakota Democrat Earl Pomeroy,[13] the Clean Alternatives for Energy Independence Act with Democrat Colorado Mark Udall,[14] the Emergency Wetlands Loan Act with California Democrat Mike Thompson,[15] the Child Support Enforcement Act with California Democrat Juanita Millender-McDonald,[16] SLAM Act with Oregon Democrat Darlene Hooley to increase penalties on those who traffic and sell meth to our young people.[17]

Kennedy refers to himself as "100% Pro-Life." He voted in favor of the Partial-Birth Abortion Ban Act, the Unborn Victims of Violence Act, and voted to sustain President Bush's veto on the Stem Cell Research Enhancement Act of 2005.[2]

In 2007, Kennedy was appointed to the President’s Advisory Committee on Trade Policy and Negotiation (ACTPN).[18] ACTPN, a part of the Office of the United States Trade Representative, considers trade policy issues in the context of overall national interest.

In 2008, Kennedy, along with former congressmen Tim Penny and Bill Frenzel, founded the Economic Club of Minnesota (ECOM),[19] a nonpartisan platform for national and international leaders in business, government, and public policy to present their ideas on how Minnesota can better compete in an increasingly globalized economy.

In 2008, he established the Frontiers of Freedom Lecture Series at the Eugene J. McCarthy Center for Public Policy at his alma mater, St. John’s University.

Kennedy became a member of the Economic Club of Washington in 2013 and Chatham House in 2014.

In 2015, Kennedy was elected to the Council on Foreign Relations.

From 2007–10 Kennedy served as the Global Retail Business Development Lead for Accenture, a global management consulting, technology, and outsourcing services firm. In 2010, he formed Chartwell Strategic Advisors LLC. Kennedy's activities through Chartwell include speaking on applying 360° Vision to bridge differences between business and society; the political left and right; the United States and the world.

In January 2012, Kennedy accepted the position of Director and Professor at the George Washington University Graduate School of Political Management.[20] During his tenure, the school launched two new master's programs—one in Spanish with a Latin American focus and one focused on advocacy in the global environment.[21]

Since 2012, Kennedy has also been an adjunct faculty member at Koc University in Istanbul, Turkey. Kennedy introduced the concept of "Shapeholders" to the field of business strategy—the political, regulatory, media, and activist actors that shape a firm's opportunities and risks. Kennedy teaches how to effectively engage shapeholders both at home and abroad to profitably advance business strategies while benefiting society.

On March 15, 2016, the North Dakota State Board of Higher Education announced that Kennedy had been selected as the twelfth President of the University of North Dakota.[22] Kennedy, who had filed his application on January 2, 2016, was in February of that year the third of six finalists to visit the University.[23] Kennedy succeeded president Robert Kelley, who retired in January 2016, and Ed Schafer, who served as interim President until Kennedy assumed office on July 1.[24] He was inaugurated on October 10, 2016.[25] 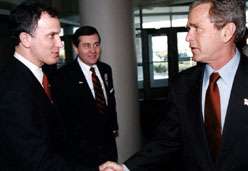