Timothy James "Tim" Walz (born April 6, 1964)[4] is an American politician and member of the Minnesota Democratic–Farmer–Labor Party who has served as the U.S. Representative for Minnesota's 1st congressional district since 2007.

The district comprises the state's southern end, running along the entire border with Iowa. It includes Rochester, Austin, Winona and Mankato.

A retired Command Sergeant Major in the Army National Guard, Walz is the highest-ranking enlisted soldier ever to serve in Congress. A moderate Democrat, Walz was first elected in 2006, defeating six-term Republican incumbent Gil Gutknecht. He has since been re-elected four times and serves on the Agriculture, Armed Services and Veterans' Affairs committees. Walz also serves on the Congressional-Executive Commission on China.

Walz was born in West Point, Nebraska, the son of Darlene R. and James F. "Jim" Walz. His ancestry includes German, Irish, and Swedish.[5] Walz, the son of a public school administrator and community activist, was raised in Chadron, Nebraska, a rural community in the northwestern portion of the state.

Walz graduated from Butte High School in a class of 25 students, and went on to earn a Bachelor of Science degree in social science education from Chadron State College. Walz's first teaching experience was at the Pine Ridge Indian Reservation in South Dakota. Walz then accepted a teaching position with WorldTeach, teaching in the People's Republic of China.[6]

Walz enlisted in the Army National Guard in 1981, and over the course of his 24-year career rose to the rank of command sergeant major. In 1989, he earned the title of Nebraska Citizen-Soldier of the Year. After a deployment to Italy with his Guard unit as part of Operation Enduring Freedom, Walz retired from the Army National Guard and resumed teaching as a geography teacher and football coach at Mankato West Senior High School.[6]

He and his wife Gwen ran Educational Travel Adventures, accompanying high school juniors and seniors on summer educational trips to China. Walz has two children—one daughter and one son.[7]

He currently resides in Mankato, Minnesota.[8]

Walz decide to run for Congress in 2006.[9] Walz had no opponent in the race for the DFL nomination for the seat in the September 12, 2006 primary election. He beat incumbent Republican Gil Gutknecht in the general election on November 7, and took office on January 3, 2007. After the election, a Walz profile described him as having caught Gutknecht "off guard" and as having "resolved never to get caught like that himself. … He packaged himself as a moderate from Day One, built an office centered on constituent service and carved out a niche as a tireless advocate for veterans."[10] 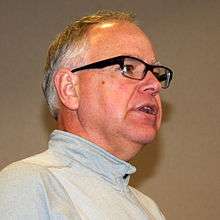 Upon his swearing in, Walz became the highest-ranking retired enlisted soldier ever to serve in Congress,[12] as well as only the fourth Democrat/DFLer to represent the 1st District. The others were Thomas Wilson (1887–89), William Harries (1891–93), and Tim Penny 1983–1995 (DFL).

Walz serves on the House Agriculture Committee,[13] Committee on Veterans' Affairs, and the Armed Services Committee. Along with fellow Minnesota Democrat, Keith Ellison, Walz opposed President Bush's plan to increase troop levels in Iraq.[14] In his first week as a legislator, Walz cosponsored a bill to raise the minimum wage, voted for stem cell research, voted to allow Medicare to negotiate pharmaceutical prices, and voiced support for pay-as-you-go budget rules, requiring that new spending or tax changes not add to the federal deficit.[15]

Representing a district that has traditionally voted Republican, but has recently become a swing district due to changing demographics, Walz has cast votes ranging from moderate to liberal.[16] He voted no on the act to Prohibit Federally Funded Abortion Services,[17] and voted yes to advance the current Health Care bill out of the house.[18] He has also voted to continue troop funding for military operations in Iraq and Afghanistan[19] and he voted against the 2008 TARP bill, which purchased troubled assets from financial institutions.[20]

Walz received a 100% rating from Planned Parenthood in 2012, from the ACLU in 2011, from the American Immigration Lawyers Association in 2009–10, from the AFL-CIO in 2010, from the Teamsters in 2009–10, and from NOW in 2007. In recent years he has received one-digit ratings from the National Taxpayers' Union, Citizens against Government Waste, Americans for Tax Reform, and Freedom Works. The US Chamber of Commerce gave him a 25% rating in 2010.[21] Walz is ranked fourth in The Lugar Center - McCourt School Bipartisan Index for 2015.[22]

Having served 24 years in the Army National Guard, Walz is the highest ranking enlisted soldier to serve in Congress. As a freshman in Congress he was given a rare third committee membership when he was assigned to the House Committee on Veterans' Affairs.[23] Walz has championed enhanced veterans benefits since taking office in 2007. In May of that year the House unanimously passed his "Traumatic Brain Injuries Center Act" to set up 5 centers around the nation to study traumatic brain injuries and develop improved models for caring for veterans suffering from such injuries.[24]

Walz also supported the GI Bill of 2008 which expanded education benefits for veterans and in some cases allowed them to transfer education benefits to family members.[25] In 2009, Walz gave the keynote address at the American Legion National Convention in Louisville, KY. In his speech he spoke about the need for the VA and Department of Defense to work together to make sure that returning service men and women "do not fall through the cracks when they transition to civilian life."[26]

Walz was the lead House sponsor of the Clay Hunt Suicide Prevention for American Veterans Act which directs the Veterans Administration to report on veteran mental health care and suicide prevention programs. It also gives the VA permission to provide incentives to psychiatrists who agree to join the VA medical system.[27]

During 2008, Walz repeatedly spoke out against using taxpayer money to bail out financial institutions; in late September he voted against the $700 billion TARP bill, which purchased troubled assets from these institutions.[28] Walz released a statement after passage of the bill saying, "The bill we voted on today passes the buck when it comes to recouping the losses taxpayers might suffer. I also regret that this bill does not do enough to help average homeowners, or provide sufficient oversight of Wall Street.”[29] In December 2008 he used the same reasoning when he voted against the bill that offered $14 billion in government loans to bail out the country's large automobile manufacturers.[30] In June 2009 Walz introduced a bi-partisan resolution calling on the federal government to "relinquish its temporary ownership interests in the General Motors Corporation and Chrysler Group, LLC, as soon as possible” and stated that the government must not be involved in the management decisions of those companies.[31]

Despite his "No" votes on bailout bills which loaned taxpayer money to the large banks and auto manufacturers, Walz did vote with his Democratic colleagues to support the 2009 American Recovery & Reinvestment Act (aka Stimulus bill). As a member of the House Transportation Committee, Walz saw the stimulus bill as an opportunity to work "with his congressional colleagues to make job creation through investment in public infrastructure like roads, bridges and clean energy the cornerstone of the economic recovery plan."[32] Walz has focused heavily on job and economic issues that are important to his southern Minnesota district, which has a mix of larger employers like the Mayo Clinic along with small businesses and agricultural interests. In July 2009 he voted for the Small Business Research and Innovation Act which he described as "part of our long-term economic blueprint to spur job creation by encouraging America's entrepreneurs to innovate toward breakthrough technological advancements."[33][34] Walz has also put emphasis on the farm economy by urging assistance for hog and dairy farmers who struggled with lower prices for their commodities in 2008 and 2009.[35]

Walz was a public school teacher for 20 years. He is a strong supporter of Public Schools and opposes using merit pay for teachers in low-income schools as punishment.[36] Voting in favor of the American Recovery and Reinvestment Act, Walz pointed to its strong provisions in support of public school buildings.[37][38] Walz is on record supporting legislation to lower tuition costs.[39] He said in a February 12, 2009 speech, that the most important thing to do "to ensure a solid base for [America's] economic future … is to provide the best education possible for [American] children."[40] He has received strong backing for these policies by many interest groups such as the National Education Association, the American Association of University Women and the National Association of Elementary School Principals.[21]

When asked in 2006 Walz responded that he supported all kinds of legal abortions, including cases of incest or rape.[36] Planned Parenthood, a national organization supporting the reproductive rights of women and women's health initiatives, gave Walz a 100% rating on their issues, including contraceptive, women's health education and family planning.[21] Walz voted against House Amendments 509 & 510.[17][41] The National Right to Life Committee gave Walz a rating of zero.[21] In early 2009, Walz voted for the Lilly Ledbetter Fair Pay Act, ensuring women receive equal pay for equal work.[42]

Walz is a strong supporter of equal rights for all, including women and the LGBT community. In early 2009, Walz voted for the Lilly Ledbetter Fair Pay Act, ensuring women receive equal pay for equal work.[42] When asked, Walz confirmed his support for federal anti-discrimination laws on the basis of sexual orientation.[36] In a 2009 speech in Washington DC, Walz called for an end to the Don't Ask, Don't Tell policy, saying that sexual discrimination has no place in the military and that sexual orientation of individuals does not affect the "professionalism" of units.[43] Walz voted in favor of the Matthew Shephard Hate Crimes Act, making sure federal law mirrored Minnesota law when it comes to hate crimes against the LGBT community. He also voted in favor of the Sexual Orientation Employment Nondiscrimination Act, which would prohibit LGBT people from being fired because of their sexual orientation.[44] In 2007, Walz received a 90% grade from the Human Rights Campaign, the nation's largest LGBT organization.[21] In 2011, Walz announced his support for the Respect for Marriage Act.[45] 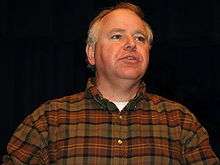