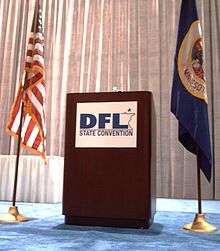 DFL logo used on a lectern at the 2006 DFL state convention.

The DFL was created on April 15, 1944, with the merger of the Minnesota Democratic Party and the Farmer–Labor Party. Leading the merger effort were Elmer Kelm, the head of the Minnesota Democratic Party and founding chairman of the DFL; Elmer Benson, effectively the head of the Farmer–Labor Party by virtue of his leadership of its dominant left-wing faction; and rising star Hubert H. Humphrey, who chaired the Fusion Committee that accomplished the union and then went on to chair its first state convention.

Orville Freeman was elected the state's first DFL governor in 1954. Important members of the party have included Minneapolis mayor Hubert H. Humphrey and Minnesota Attorney General Walter Mondale, who each went on to be United States Senators, Vice Presidents of the United States, and unsuccessful Democratic nominees for president, Humphrey in 1968 and Mondale in 1984; Eugene McCarthy, a U.S. senator who ran for the Democratic presidential nomination in 1968 as an anti-Vietnam War candidate; and Paul Wellstone, a U.S. senator from 1991 to 2002 who became an icon of populist progressivism.[1]