Mangal Pandey was an Indian soldier who played a key part in events immediately preceding the outbreak of the Indian rebellion of 1857. He was a sepoy (sipahi) in the 34th Bengal Native Infantry (BNI) regiment of the British East India Company. While contemporary British opinion considered him a traitor and mutineer, Pandey is widely regarded as a hero in modern India. In 1984, the Indian government issued a postage stamp to commemorate him. His life and actions have also been portrayed in several cinematic productions.

Mangal Pandey was born on 19 July 1827 in a Brahmin family[1] in Nagwa, a village of upper Ballia district, Ceded and Conquered Provinces (now in Uttar Pradesh).[2] He had joined the East India Company's army in 1849. Pandey was a soldier in the 6th Company of the 34th Bengal Native Infantry and is primarily known for his involvement in an attack on several of the regiment's officers. This incident marked an opening stage in the Indian rebellion of 1857, and paved the way for his death.

Photo of the Enfield Rifle, the pending adoption of which caused unrest in the Bengal Army in early 1857

At Barrackpore on the afternoon of 29 March 1857, Lieutenant Baugh, Adjutant of the 34th Bengal Native Infantry (BNI), was informed that several men of his regiment were in an excited state. Further, it was reported to him that one of them, Mangal Pandey, was pacing in front of the regiment's guard room by the parade ground, armed with a loaded musket, calling upon the men to rebel and threatening to shoot the first European that he set eyes on. Baugh immediately buckled on his sword, placed loaded pistols in his holsters, mounted his horse, and galloped to the lines. Pandey took position behind the station gun, which was in front of the quarter-guard of the 34th, took aim at Baugh and fired. He missed Baugh, but the bullet struck his horse in the flank, and horse and rider were brought down. Baugh quickly disentangled himself and, seizing one of his pistols, advanced towards Pandey and fired. He missed. Before Baugh could draw his sword, Pandey attacked him with a talwar (a heavy Indian sword) and closing with the adjutant, slashed Baugh on the shoulder and neck and brought him to the ground. It was then that another sepoy, Shaikh Paltu, intervened and tried to restrain Pandey even as he tried to reload his musket.[3]

English Sergeant-Major Hewson, had arrived on the parade ground, summoned by a native officer, before Baugh. He had ordered Jemadar Ishwari Prasad, the Indian officer in command of the quarter-guard, to arrest Pandey. To this, the jemadar stated that his NCOs had gone for help and that he could not take Pandey by himself.[4] In response Hewson ordered Ishwari Prasad to fall in the guard with loaded weapons. In the meantime, Baugh had arrived on the field shouting 'Where is he? Where is he?' Hewson in reply called out to Baugh, 'Ride to the right, sir, for your life. The sepoy will fire at you!'[5] At that point Pandey fired.

Hewson had charged towards Pandey as he was fighting with Lieutenant Baugh. While confronting Pandey, Hewson was knocked to the ground from behind by a blow from Pandey's musket. The sound of the firing had brought other sepoys from the barracks; they remained mute spectators. At this juncture, Shaikh Paltu, while trying to defend the two Englishmen called upon the other sepoys to assist him. Assailed by other sepoys, who threw stones and shoes at his back, he called on the guard to help him hold Pandey, but they threatened to shoot him if he did not let go of the mutineer.[5]

Some of the sepoys of the quarter-guard then advanced and struck at the two prostrate officers. They then threatened Shaikh Paltu and ordered him to release Pandey, whom he had been vainly trying to hold back. However, Paltu continued to hold Pandey until Baugh and the sergeant-major were able to get up. Himself wounded by now, Paltu was obliged to loosen his grip. He backed away in one direction and Baugh and Hewson in another, while being struck with the butt ends of the guards' muskets.[5]

In the meantime, a report of the incident had been carried to the commanding officer General Hearsey, who then galloped to the ground with his two officer sons. Taking in the scene, he rode up to the guard, drew his pistol and ordered them to do their duty by seizing Mangal Pandey. The General threatened to shoot the first man who disobeyed. The men of the quarter-guard fell in and followed Hearsey towards Pandey. Pandey then put the muzzle of the musket to his chest and discharged it by pressing the trigger with his foot. He collapsed bleeding, with his regimental jacket on fire, but not mortally wounded.[5]

Pandey recovered and was brought to trial less than a week later. When asked whether he had been under the influence of any substances, he stated steadfastly that he had mutinied on his own accord and that no other person had played any part in encouraging him. He was sentenced to death by hanging, along with Jemadar Ishwari Prasad, after three Sikh members of the quarter-guard testified that the latter had ordered them not to arrest Pandey.[5]

Mangal Pandey's execution was scheduled for 18 April, but was carried out ten days before that date. Jemadar Ishwari Prasad was executed by hanging on 21 April.[5]

The 34th B.N.I. Regiment was disbanded "with disgrace" on 6 May as a collective punishment, after an investigation by the government, for failing to perform their duty in restraining a mutinous soldier and their officer. This came after a period of six weeks while petitions for leniency were examined in Calcutta.

The Indian historian Surendra Nath Sen notes that the 34th B.N.I. had a good recent record and that the Court of Enquiry had not found any evidence of a connection with unrest at Berhampur involving the 19th B.N.I. four weeks before (see below). However, Mangal Pandey's actions and the failure of the armed and on-duty sepoys of the quarter-guard to take action convinced the British military authorities that the whole regiment was unreliable. It appeared that Pandey had acted without first taking other sepoys into his confidence but that antipathy towards their British officers within the regiment had led most of those present to act as spectators rather than obey orders.[6]

The personal motivation behind Pandey's behaviour remains confused. During the incident itself he shouted to other sepoys: "come out - the Europeans are here"; "from biting these cartridges we shall become infidels" and "you sent me out here, why don't you follow me". At his court-martial he stated that he had been taking bhang and opium, and was not conscious of his actions on 29 March.[7]

There were a wide range of factors causing apprehension and mistrust in the Bengal Army immediately prior to the Barrackpore event. Pandey's reference to cartridges is usually attributed to a new type of bullet cartridge used in the Enfield P-53 rifle which was to be introduced in the Bengal Army that year. The cartridge was thought to be greased with animal fat, primarily from cows and pigs, which could not be consumed by Hindus and Muslims respectively (the former a holy animal of the Hindus and the latter being abhorrent to Muslims). The cartridges had to be bitten at one end before use. The Indian troops in some regiments were of the opinion that this was an intentional act of the British, with the aim of defiling their religions.[8]

Commandant Wheeler of the 34th BNI was known as a zealous Christian preacher. The wife of Captain William Halliday of the 56th BNI had the Bible printed in Urdu and Devanagari and distributed among the sepoys, thus raising suspicions amongst them that the British were intent on converting them to Christianity.[5]

The 19th and 34th Bengal Native Infantry were stationed at Lucknow during the time of annexation of Oudh in 1856 because of alleged misgovernment by the Nawab. The annexation had negative implications for sepoys in the Bengal Army (a significant portion of whom came from that princely state). Before the annexation, these sepoys had the right to petition the British Resident at Lucknow for justice — a significant privilege in the context of native courts. As a result of the East India Company's action they lost that special status, since Oudah no longer existed as a nominally independent political entity.[9]

The 19th B.N.I. is important because it was the regiment charged with testing the new cartridges on 26 February 1857. However, right up to the mutiny the new rifles had not been issued to them, and the cartridges in the magazine of the regiment were as free of grease as they had been through the preceding half century. The paper used in wrapping the cartridges was of a different colour, arousing suspicions. The non-commissioned officers of the regiment refused to accept the cartridges on 26 February. This information was conveyed to the commanding officer, Colonel Mitchell; he took it upon himself to try to convince the sepoys that the cartridges were no different from those they had been accustomed to and that they need not bite it. He concluded his exhortation with an appeal to the native officers to uphold the honour of the regiment and a threat to court-martial such sepoys as refused to accept the cartridge. However, the next morning the sepoys of the regiment seized their bell of arms (weapons store). The subsequent conciliatory behaviour of Mitchell convinced the sepoys to return to their barracks.[10] A Court of Enquiry was ordered which, after an investigation lasting nearly a month, recommended the disbanding of the regiment. The same was carried out on 31 March. The 19th BNI were allowed to retain their uniforms and were provided by the Government with allowances to return to their homes.

The attack by and punishment of Pandey is widely seen as the opening scene of what came to be known as the Indian Rebellion of 1857. Knowledge of his action was widespread amongst his fellow sepoys and is assumed to have been one of the factors leading to the general series of mutinies that broke out during the following months.

A film based on the sequence of events that led up to the mutiny entitled Mangal Pandey: The Rising starring Indian actor, Aamir Khan along with Rani Mukerji, Toby Stephens and Amisha Patel, directed by Ketan Mehta was released on 12 August 2005.

The life of Mangal Pandey was the subject of a stage play titled The Roti Rebellion, which was written and directed by Supriya Karunakaran. The play was organized by Sparsh, a theatre group, and presented in June 2005 at The Moving Theatre at Andhra Saraswat Parishad, Hyderabad, Andhra Pradesh.

Samad Iqbal, a fictional descendant of Mangal Pandey, is a central character in Zadie Smith's debut novel White Teeth. Pandey is an important influence on Samad's life and is repeatedly referenced and investigated by the novel's characters.

In the English language, Pandey is best remembered for the word his surname and his actions helped coin: pandy — a traitor, particularly a rebellious sepoy of the Mutiny of 1857. Once a colloquial term widely used by English speakers in India, the word is now obsolete.[11][12] 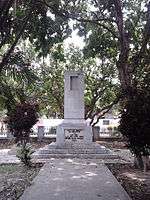 The Government of India commemorated Mangal Pandey by issuing a postage stamp bearing his image on 5 October 1984. The stamp and the accompanying first-day cover were designed by Delhi-based artist C. R. Pakrashi.

A park is named 'Shaheed Mangal Pandey Maha Udyan' in the memory of Mangal Pandey where he attacked British officers and was hanged, at Barrackpore road in Barrackpore sub-divisional town in North 24 Parganas district.[13][14]