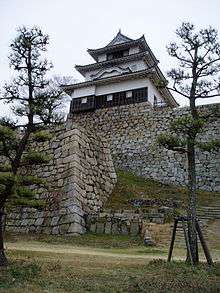 Marugame is famous for Marugame Castle — one of only 12 castles with original wooden tenshu (keeps) in Japan. The castle stands on a man-made hill which is over 50m high, making it the largest castle mount in Japan.

Marugame is famed for its fan (uchiwa) production. About 90% of all fans made in Japan are produced in Marugame.

Places of interest to visit close to Marugame include:

Since 1947, the city has played host to an annual road running competition: the Marugame Half Marathon. Occurring in early February, the race attracts thousands of runners each year.[2] The Asian record in the half marathon was set on the course by Kayoko Fukushi in 2006.[3]

Reoma World, a well-known recreational facility in Shikoku, officially opened on April 20, 1991, but closed due to financial difficulties in August 2000.

It re-opened on April 11, 2004 with new funding. There are many attractions, two restaurants, a spa and hotel in the theme park. Total annual attendance was 660,000 in 2009, significantly reduced compared with 1.6 million attendance in 2004, possibly due to the inconvenience of public transport.

Marugame is home to the Marugame Genichiro-Inokuma Museum of Contemporary Art (MIMOCA), situated just east of the railway station, housing the works of Genichiro Inokuma, as well as playing host to many large visiting exhibitions.

Marugame was founded in April, 1899 during the Meiji era. Marugame was the 53rd city to be given a city code in Japan. From the 1940s to 1950s (during the Showa era) the southeast area of the city and some islands were amalgamated to form new parts of the city. In 1999 (the 11th year of the Heisei era) Marugame celebrated its 100th anniversary.

On March 22, 2005, the towns of Ayauta and Hanzan (both from Ayauta District) were merged into Marugame to create the current expanded city of Marugame.

The economy produces chemicals, textiles, fans, salt, rice and barley. In the early 1980s, large coastal salt fields were reclaimed from the sea to stimulate further economic development. The city's importance as a port for pilgrims coming from the Kyōto and Ōsaka areas to worship at the Kompira Shrine in Kotohira (from the Tokugawa period to the early Meiji period) declined with the opening of the railway between Matsuyama and Takamatsu in 1889 and more recently with the development of bus and air service linking Kotohira with major cities.