Matball, known in some areas as Big Base,[1] is a sport, usually played indoors but also sometimes outdoors,[2] played in schools throughout the United States. Matball is a safe haven game (sometimes termed a bat-and-ball game, despite the lack of a bat) similar to kickball, but with the key difference that bases are larger, often gym mats (giving the names "matball" and "big base"), and multiple runners can be on each base.

The object of Matball is similar to kickball in which there are two opposing teams, each trying to score by kicking the ball and then running the bases (represented by mats) successfully. The team with the most runs scored is the declared the winner.[3] 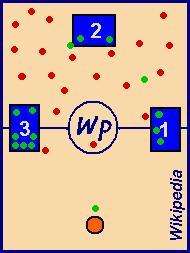 This is an example of a matball field while a game is in progress. Red denotes defense, while green denotes offense.

Although rule details vary from site to site, and even from game to game, there are a few standard rules.

The game is very similar to kickball, with one team kicking (sometimes called "batting" despite the lack of bats) and the other team fielding. The primary difference is that, rather than small bases intended for a single runner per base, large bases that can accommodate multiple runners are used, giving the game its names, "big base" or "matball" (when played indoors, in a gym, mats are often used for the bases). As a result of allowing multiple runners, usually unlimited, per base, there are usually no force-outs,[2] although some variants limit the number of runners per base and allow force-outs. In some cases, a kicking team is retired after a set number of outs (often three or five),[4] but in other cases outs are not counted, and play continues until all members of the kicking team have kicked, ensuring that everyone gets to participate. The number of innings varies, often changing even from game to game, to fit the game to an allotted time;[5] when outs are not counted each inning is longer, and so fewer innings are played.

As in kickball, a ball is put in play when the pitcher rolls it to home base and the kicker kicks it into the designated field of play. The kicker must then run to at least first base.[4] In most cases, when a player steps off a mat, sometimes just with one foot, that player must continue to the next base,[2] though an exception is often made for an incoming runner whose momentum carries them a step or two beyond the base.[4] Outs occur when a pop-fly is caught, the ball beats the runner to first base on the initial kick, a runner is touched by the ball while not on base, or runners do not tag-up after a pop-fly is caught.

Because there is no standard field of play, rules about fair and foul balls and home runs vary widely. Common variants include the following:

Common variants include the following: