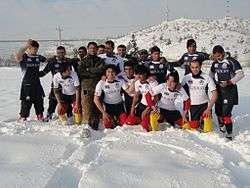 Snow rugby refers to forms of rugby union, which are especially adapted to be played in winter conditions, particularly deep snow. It is played in the Argentinian Ski Resort of Las Leñas,[1][2] Canada,[3] the Kashmir region in India,[4][5] the Baltic states,[6] Russia (USSR), northern USA and Finland and other locations where climate permits.

Rugby union is predominately played during the winter months and it has been played in extremely cold conditions. In 1939 a Ranfurly Shield game in New Zealand was played in the snow[7] and in 1978 a game in Russia was played at -23°C.[8] More recently games have been organised to be played in the snow. In 2009, Gulmarg hosted India's first ever snow rugby tournament in Kashmir[4] and it was included in the 2008 Indian Winter Games as a demonstrative event.[5] During the 2011 Rugby World Cup Mount Dobson is hosting a "20 Below Rugby in the Snow" seven-a-side tournament.[9] Tournaments have also been held in Finland,[10][11] France,[12] Latvia,[13] and Argentina.[14]

Because of the cold, and often subzero, temperatures which snow rugby is played in, players cannot play in standard rugby attire for the sake of their health.

The usual attire of shorts, bare legs, hands and even heads is simply not practical.