Camogie (/kɑːmɔːɡiː/; Irish: camógaíocht; formerly spelled camoguidheacht) is an Irish stick-and-ball team sport played by women; it is almost identical to the game of hurling played by men. Camogie is played by 100,000 women in Ireland and worldwide, largely among Irish communities.[1][2] It is organised by the Dublin-based Camogie Association or An Cumann Camógaíochta.

The rules are almost identical to hurling, with a few exceptions.[6]

Camogie players must wear skirts or skorts rather than shorts.

Experimental rules were drawn up in 1903 for a female stick-and-ball game by Máire Ní Chinnéide, Seán (Sceilg) Ó Ceallaigh, Tadhg Ó Donnchadha and Séamus Ó Braonáin. The Official Launch of Camogie took place with the first public match between Craobh an Chéitinnigh (Keatings branch of the Gaelic League) and Cúchulainns on 17 July at a Feis in Navan. The sport's governing body, the Camogie Association or An Cumann Camógaíochta was founded in 1905 and re-constituted in 1911, 1923 and 1939. Until June 2010 it was known as Cumann Camógaíochta na nGael.

Máire Ní Chinnéide and Cáit Ní Dhonnchadha, two prominent Irish-language enthusiasts and cultural nationalists, were credited with having created the sport, with the assistance of Ní Dhonnchadha's scholarly brother Tadhg Ó Donnchadha, who drew up its rules. Thus, although camogie was founded by women, and independently run (although closely linked to the GAA), there was, from the outset, a small yet powerful male presence within its administrative ranks. It was no surprise that camogie emanated from the Gaelic League, nor that it would be dependent upon the structures and networks provided by that organisation during the initial expansion of the sport. Of all the cultural nationalist organisations for adults that emerged during the fin de siècle, the Gaelic League was the only one to accept female and male members on an equal footing.[8] 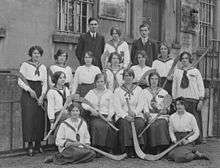 A camogie team pictured in Waterford in October 1915

Under Séamus Ó Braonáin's original 1903 camogie rules both the match and the field were shorter than their hurling equivalents. Matches were 40 minutes, increased to 50 minutes in 1934, and playing fields 125–130 yards (114-119m) long and 65–70 yards (59-64m) wide. From 1929 until 1979 a second crossbar, a "points bar" was also used, meaning that a point would not be allowed if it travelled over this bar, a somewhat contentious rule through the 75 years it was in use. Teams were regulated at 12 a side, using an elliptical formation (1–3–3–3–1) although it was more a "squeezed lemon" formation with the three midfield players grouped more closely together than their counterpart on the half back and half-forward lines. In 1999 camogie moved to the GAA field-size and 15-a-side, adopting the standard GAA butterfly formation (3–3–2–3–3).

The name was invented by Tadhg Ua Donnchadha (Tórna) at meetings in 1903 in advance of the first matches in 1904. [9] Men play using a curved stick called in Irish a camán. Women would use a shorter stick, at one stage described by the diminutive form camóg. The suffix -aíocht (originally "uidheacht") was added to both words to give names for the sports: camánaíocht (which became iománaíocht) and camógaíocht. When the Gaelic Athletic Association was founded in 1884 the English-origin name "hurling" was given to the men's game. When an organisation for women was set up in 1904, it was decided to anglicise the Irish name camógaíocht to camogie.[1]

A reference to camogie features in one of Lucky's speeches in Waiting for Godot by Irish playwright Samuel Beckett.

An Cumann Camógaíochta has a similar structure to the Gaelic Athletic Association, with an Annual Congress every spring which decides on policy and major issues such as rule changes, and an executive council, the Árd Chómhairle which deals with short-term issues and governance. The game is administered from a headquarters in Croke Park in Dublin. Each of 28 county boards takes control of its own affairs (all of the Irish counties except Fermanagh, Leitrim and Sligo), with the number of clubs ranging from 58 in Cork to one in Leitrim. There are four provincial councils and affiliates in Asia, Australia, Britain, Europe, New York, New Zealand and North America.

The county is the unit of structure in elite competition, responsible for organising club competitions within the county unit and for fielding inter-county teams in the various grades of the All Ireland championships and National Camogie League.

The National League is staged during the winter-spring months, with four divisions of team graded by ability.

Provincial championships take place at all levels, independent of the All Ireland series which has been run on an open draw basis since 1973.

Ireland plays a camogie-shinty international against Scotland each year. The Gael Linn Cup is an inter-provincial competition played at senior and junior level. The sport is closely associated with the Celtic Congress. Two former Camogie Association presidents Máire Ní Chinnéide and Agnes O'Farrelly were also presidents of Celtic Congress and exhibition matches have been held at the Celtic Congress since 1938. The first such exhibition match, on the Isle of Man in 1938, marked the first appearance of Kathleen Cody, who became one of the stars of the 1940s.

The Ashbourne and Purcell Cups and Father Meachair seven-a-side are the principal inter-collegiate competitions.

Camogie competitions for club teams featuring under-14 players are played in four divisions as part of the annual Féile na nGael festival. The county that is selected for a particular year, all their clubs host teams from all around the country representing their county. Host clubs get families to take in two or three children for a couple of days.

Dublin have won the most Camogie All-Ireland titles with 26, the last being in 1984. See All-Ireland Senior Camogie Championship.

Camogie All Stars Awards are awarded annually to the elite players who have performed best in each of the 15 positions on a traditional camogie team. Player of the year and other achievement awards have also been awarded to leading players for several decades.

Team of the Century