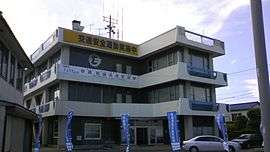 Matsushima (松島町, Matsushima-machi) is a town in Miyagi District, Miyagi Prefecture, in the Tohoku region of northern Japan. As of August 2016, the town had an estimated population of 14,733 and a population density of 275 persons per km². The total area was 53.56 square kilometres (20.68 sq mi). It is most famous as the location of Matsushima Bay, one of the Three Views of Japan, and is also the site of the Zuigan-ji, one of the most famous Zen temples in Tōhoku, Entsū-in and Kanrantei.

Matsushima is in east-central Miyagi Prefecture, with Matsushima Bay to the east. The town’s highest point is Mount Danyama, with a height of 178 meters.

The area of present-day Matsushima was part of ancient Mutsu Province and has been settled since at least the Jomon period. The Daikigakoi Shell Mound is one of the largest shell middens to have been discovered in Japan. With the establishment of Tagajō in the Nara period, Matsushima was part of the Yamato colonization area in the region. During the Sengoku period, the area was contested by samurai clans before it came under the control of the Date clan of Sendai Domain during the Edo period, under the Tokugawa shogunate.

The modern village of Matsushima was established on June 1, 1889 with the establishment of the municipalities system. It was raised to town status on December 16, 1963.

The economy of Matsushima is largely based on tourism, farming, and commercial fishing, primarily the cultivation of oysters in Matsushima Bay.

Matsushima has three elementary schools, one middle school and one high school.