The Jōmon period (縄文時代, Jōmon jidai) is the time in Prehistoric Japan from about 16,500 years ago[1][2][3] to about 2,300 years ago when Japan was inhabited by a hunter-gatherer culture, which reached a considerable degree of sedentism and cultural complexity. The name "cord-marked" was first applied by the American scholar Edward S. Morse who discovered shards of pottery in 1877 and subsequently translated it into Japanese as jōmon.[4] The pottery style characteristic of the first phases of Jōmon culture was decorated by impressing cords into the surface of wet clay. This pottery, dated to around 16,000 years ago, seems to be the second oldest in the world; the oldest one has now been found in China. Pottery in the Russian Far East, and in Korea is also very old.[5]

Jomon period was rich in tools and jewelry made from bone, stone, shell, and antler; pottery figurines and vessels; and lacquered wood.[6][7][8][9] This culture is often compared to pre-Columbian cultures of Pacific Northwest North America because in both regions cultural complexity developed within a primarily hunting-gathering context (with limited use of horticulture).[10][11]

The very long—approximately 14,000 years—Jōmon period is conventionally divided into a number of phases: Incipient (16,500-10,000 years ago), Initial (10,000-7,000), Early (7,000-5,450), Middle 5,450-4,420), Late (4,420-3,220) and Final (3,220-2,350), with the phases getting progressively shorter.[3] The fact that this entire period is given the same name by archaeologists should not be taken to mean that there was not considerable regional and temporal diversity; the chronological distance between the earliest Jōmon pottery and that of the more well-known Middle Jōmon period is about twice as long as the span separating the building of the Great Pyramid of Giza from the 21st century.

Dating of the Jōmon sub-phases is based primarily upon ceramic typology, and to a lesser extent radiocarbon dating.

Traces of Paleolithic culture, mainly stone tools, occur in Japan from around 30,000 BC onwards. The earliest "Incipient Jōmon" phase began while Japan was still linked to continental Asia as a narrow peninsula.[12] As the glaciers melted following the end of the Last glacial period (approximately 12,000 years ago), sea levels rose, separating the Japanese archipelago from the Asian mainland; the closest point (in Kyushu) about 190 km (120 miles) from the Korean Peninsula is near enough to be intermittently influenced by continental developments but far enough removed for the peoples of the Japanese islands to develop their own ways.

Within the archipelago the vegetation was transformed by the end of the Ice Age. In southwestern Honshu, Shikoku, and Kyushu, broadleaf evergreen trees dominated the forests, whereas broadleaf deciduous trees and conifers were common in north-eastern Honshu and southern Hokkaido. Many native tree species, such as beeches, buckeyes, chestnuts, and oaks produced edible nuts and acorns. These provided abundant sources of food for humans and for animals.

In the northeast, the plentiful marine life carried south by the Oyashio current, especially salmon, was an additional major source of food. Settlements along both the Sea of Japan and the Pacific Ocean subsisted on immense amounts of shellfish, leaving distinctive middens (mounds of discarded shells and other refuse) that are now prized sources of information for archeologists. Other sources of food meriting special mention include deer, wild boar, yam-like tubers and other wild plants, and freshwater fish. Supported by the highly productive deciduous forests and an abundance of seafood, the population was concentrated in central and northern Honshu, but Jōmon sites range from Hokkaido to the Ryukyu Islands. 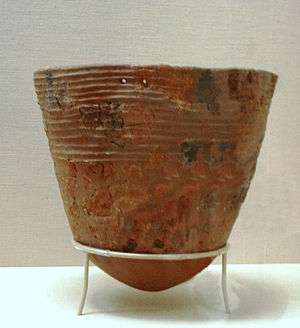 The earliest pottery in Japan was made at or before the start of the Incipient Jōmon period. In 1998 small fragments were found at the Odai Yamamoto I site, which have been dated to 14,500 BC; subsequently, pottery of roughly the same age was found at other sites such as Kamikuroiwa and Fukui Cave.[12][13][14]

Archaeologist Junko Habu claims that "The majority of Japanese scholars believed, and still believe, that pottery production was first invented in mainland Asia and subsequently introduced into the Japanese archipelago."[14] This seems to be confirmed by recent archaeology. As of now, earliest pottery vessels in the world date back to 20,000 BP and were discovered in Xianrendong cave in Jiangxi, China.[15][16] The pottery may have been used as cookware.[15] Other early pottery vessels include those excavated from the Yuchanyan Cave in southern China, dated from 16,000 BC,[17]

At present it appears that pottery emerged at roughly the same time in Japan, and in the Amur River basin of far eastern Russia.[18][19]

The first Jōmon Pottery is characterized by the cord-marking that gives the period its name and has now been found in large numbers of sites.[20] The pottery of the period has been classified by archaeologists into some 70 styles, with many more local varieties of the styles.[4] The antiquity of Jōmon pottery was first identified after World War II, through radiocarbon dating methods.[7][21] The earliest vessels were mostly smallish round-bottomed bowls 10–50 cm high that are assumed to have been used for boiling food and, perhaps, storing it beforehand. They belonged to hunter-gatherers and the size of the vessels may have been limited by a need for portability. As later bowls increase in size, this is taken to be a sign of an increasingly settled pattern of living. These types continued to develop, with increasingly elaborate patterns of decoration, undulating rims, and flat bottoms so that they could stand on a surface.[22]

The manufacture of pottery typically implies some form of sedentary life because pottery is heavy, bulky, and fragile and thus generally unusable for hunter-gatherers. However, this does not seem to have been the case with the first Jōmon people, who perhaps numbered 20,000 over the whole archipelago.[12] It seems that food sources were so abundant in the natural environment of the Japanese islands that it could support fairly large, semi-sedentary populations. The Jōmon people used chipped stone tools, ground stone tools, traps, and bows, and were evidently skillful coastal and deep-water fishermen.

Early agricultural techniques were clearly used, and there was a wide variety of crops,

An apparently domesticated variety of peach appeared very early at Jomon sites in 6700–6400 BP (4700–4400 BC). This was already similar to modern cultivated forms. This domesticated type of peach was apparently brought in to Japan from China. Nevertheless, in China, itself, this variety is currently attested only at a later date of ca. 5300 to 4300 BP.[26]

By the end of the Incipient Jōmon phase, around 8,000 BC, a semi-sedentary lifestyle apparently led to an increase in population density, so that the subsequent phase, the Initial Jōmon, exhibits some of the highest densities known for foraging populations.[27] Genetic mapping studies by Cavalli-Sforza have shown a pattern of genetic expansion from the area of the Sea of Japan towards the rest of eastern Asia. This appears as the third principal component of genetic variation in Eurasia (after the "Great expansion" from the African continent, and a second expansion from the area of Northern Siberia), which suggests geographical expansion during the early Jōmon period.[28] These studies also suggest that the Jōmon demographic expansion may have reached America along a path following the Pacific coast.[29] 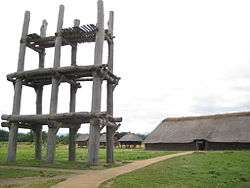 The Early and Middle Jōmon periods saw an explosion in population, as indicated by the number of settlements from this period. These two periods occurred during the Holocene Climatic Optimum (between 4000 BC and 2000 BC), when the local climate became more humid.[31]

Highly ornate pottery dogū figurines and vessels, such as the so-called "flame style" vessels, and lacquered wood objects remain from that time. Interestingly, although the ornamentation of pottery increased over time, the ceramic fabric always remained quite coarse.

This period saw a rise in complexity in the design of pit houses, the most commonly used method of housing at the time,[32][33] with some even having stone paved floors.[34] Study in 2015 found that this form of dwelling continued up to Satsumon culture.[33]

After 1500 BC, the climate cooled, and populations seem to have contracted dramatically. Comparatively few archaeological sites can be found after 1500 BC.

During the Final Jōmon period, a slow shift was taking place in western Japan: steadily increasing contact with the Korean peninsula eventually led to the establishment of Korean-type settlements in western Kyushu, beginning around 900 BC. The settlers brought with them new technologies such as wet rice farming and bronze and iron metallurgy, as well as new pottery styles similar to those of the Mumun culture. The settlements of these new arrivals seem to have coexisted with those of the Jōmon and Yayoi for around a thousand years. The new farming culture is called Yayoi after an archaeological site near Tokyo.[7] 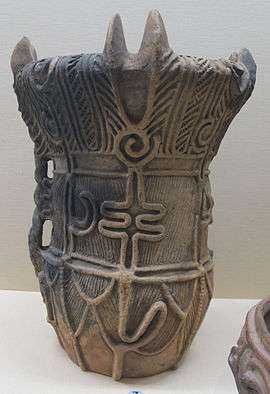 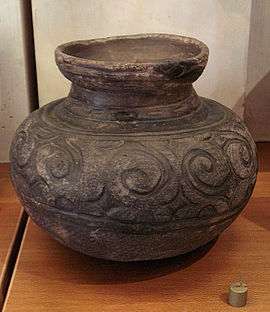 The foundation myths of the origins of Japanese civilization extend back to periods now regarded as part of the Jōmon period, though they show little or no relation to what we know archaeologically of Jōmon culture. 11 February 660 BC is the traditional founding date of the Japanese nation by Emperor Jimmu. This version of Japanese history, however, comes from the country's first written records, the Kojiki and Nihongi or Nihon shoki, dating from the 6th to the 8th centuries AD, after Japan had adopted the Chinese writing system (Go-on/Kan-on).[35]

Some elements of modern Japanese culture may date from this period and reflect the influences of a mingled migration from the northern Asian continent and the southern Pacific areas and the Jōmon peoples. Among these elements are the precursors to Shinto religion, some marriage customs, architectural styles, and technological developments such as lacquerware, laminated bows, metalworking, and glass making.

The relationship of Jōmon people to the modern Japanese and Ainu remains uncertain. Some consider the Japanese of today to be descended from a mixture of the ancient hunter-gatherer Jōmon culture and the Yayoi culture[36][37] rice agriculturalists. According to this theory these two major ancestral groups came to Japan over different routes at different times. Recent Y-DNA haplotype testing has led to the popularly accepted (though untested) hypothesis that haplogroup D-M55 Y-DNA, which has been found in some percentages of samples of modern Japanese, Ryukyuan, and Ainu males, may reflect patrilineal descent from members of a Jōmon period culture of the Japanese Archipelago.[38] Analysis of mitochondrial DNA of Jomon skeletons from Hokkaido indicates that haplogroups N9b and M7a may reflect maternal Jomon contribution to the modern Japanese mtDNA pool.[39]

A 2016 study on ancient Jomon aDNA from Sanganji shell mound estimates that the modern Japanese population inherited less than 20% of their DNA from the ancient Jomon populations.[40]

Mark J. Hudson of Nishikyushu University posits that Japan was settled by a Proto-Mongoloid population in the Pleistocene who became the Jōmon, and that their features can be seen in the Ainu and Okinawan people.[13] The Jomon share some physical characteristics, such as relatively abundant body hair, with Caucasians, but anthropological genetics shows them to derive from a completely separate genetic lineage from that of Europeans.[41] Jomon shows closest genetic relationship to Southeast Asians rather than western Eurasian people.[42]