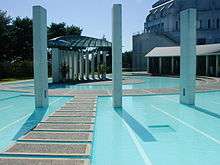 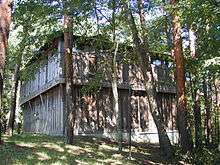 Shichigahama (七ヶ浜町, Shichigahama-machi) is a town located in Miyagi District, Miyagi Prefecture, in the Tohoku region of northern Japan. As of September 2015, the town had an estimated population of 18,713 and a population density of 1420 persons per km². The total area was 13.19 square kilometres (5.09 sq mi).

The town itself is situated on a peninsula in the middle of Miyagi Prefecture between the cities of Tagajō in the west and Shiogama in the north and east, and about halfway between Sendai and Matsushima. Shichigahama is the smallest city, town or village by land area in the whole Tōhoku region. The climate is relatively mild compared to its surrounding area and temperatures do not greatly fluctuate.

The area of present-day Shichigahama was part of ancient Mutsu Province, and has been settled since at least the Jōmon period of Japanese pre-history. One of the largest shell mounds to be discovered in Japan is located at the Shichigahama Jōmon History Museum (Daigigakoikaizuka, 大木囲貝塚).

With the establishment of Tagajō in the Nara period, Shichigahama was part of the central Yamato colonization area in the region. During this time, Shichigahama was recorded as sending a wealth of marine produce to the nearby capital. During the Sengoku period, the area was contested by various samurai clans before the area came under the control of the Date clan of Sendai Domain during the Edo period, under the Tokugawa shogunate.

Modern Shichigahama developed as the seven coastal settlements that now give the town its name and the village of Shichigahama was officially established in 1889 with the establishment of the municipalities system.. The village was raised to town status on January 1, 1959. The population grew steadily, with the neighborhoods of Shiomidai and Shiomidai Minami being developed in the late 20th century, to a current peak population of 21,131 people in 2000.

On 11 March 2011 at 2:46 p.m. local time, the town was badly damaged by the tsunami caused by the 2011 Tohoku-Pacific Great earthquake. The tsunami was as tall as 10 m as it hit the town, destroying the majority of homes in Shobutahama and Hanabuchihama, as well as washing away or severely damaging many houses and buildings in the other coastal neighborhoods. The town estimates that over 1,000 houses were destroyed or damaged beyond use. The wave reached over 2 km inland, flooding the fields in front of Koyo Junior High School and Shiomidai and scattering the debris of the homes from Shobutahama. Approximately 95% of the town's rice fields were also flooded with seawater.

Over 4,000 people were initially evacuated to thirteen evacuation centres. People were slowly able to return to their homes, find alternative rental accommodation or relocate to the homes of family members, leaving 715 people in three shelters by April 27 and 229 people in two shelters (the Kokusaimura and Community Centre) by June 3. By Mid-June, everyone had been moved out of evacuation centres into alternative existing accommodation or town-provided temporary housing.

As the rescue activities were completed, relief and rebuilding efforts began. Temporary housing was built for 877 people at two sites: Shichigahama Sports Fields (151 homes, housing 569 people) and Shichigahama Junior High School Baseball Field (106 homes, housing 308 people). The temporary, pre-fabricated homes were initially intended for 2–3 years, however a large number remain in use in 2014 due to slow progress on rebuilding. The Japanese Self-Defence Force, who were instrumental in initial rescue and relief activities, continued to provide widespread support to the town. They cooked the food at the evacuation centres, provided temporary bathing facilities, and assisted in clearing debris. A volunteer centre was also established at the town community center, operated by volunteers and NGO's. The center coordinates the volunteer activities for hundreds of daily volunteers performing a range of tasks such as collecting and cleaning photos recovered from the debris, delivering donated items to the temporary homes, and clearing rubble and debris from sites of former homes.

Shichigahama's national and international relationships also provided particular support. The sister town of Plymouth, Massachusetts organized a number of fundraising events capped by a 3-hour telethon which raised over $85,000. Shichigahama's ocean-to-mountain sister town of Asahi, Yamagata-ken sent dozens of volunteers by bus every day to join the volunteer centre activities.

A huge pile of debris rapidly accumulated opposite the Aquarena leisure centre as sites were cleared. The plan for this debris, and for similar mountains throughout Tohoku, is still to be determined although the debris hills have currently been covered in soil and grass.

The economy of Shichigahama is largely based on commercial fishing, and seasonal tourism.

Traditionally, Shichigahama was an ocean-driven economy with a large number of the population working in fishing, seaweed production, and also rice farming. This pattern has changed significantly in recent years with younger residents increasingly commuting to manufacturing and service jobs outside Shichigahama. A survey in 2000 indicated that working residents worked in the following industry sectors:

The town is well known in the region for its beaches, and Shobutahama is a popular summer day-trip location for people from across Miyagi. During the summer season, a handful of "Umi no ie" (海の家) or "sea houses" are temporarily constructed on the beach, selling drinks and beach toys. Azukihama (小豆浜) in Hanabuchihama (花渕浜), is frequented almost year-round by the surfing community in Miyagi and northern Japan.

The commercial fishing industry is largely located in Hanabuchihama with a harbour, boats and related services located there. The majority of farmland in Shichigahama is family-owned. Family members work other main jobs in addition to growing rice, this leads a lot of the farming work to be performed by retirees and grandparents. Rice is produced primarily for family consumption with surplus production sold to local agricultural cooperatives. There is significant concern that this farming tradition will be lost in subsequent generations as younger family members choose not to farm or have moved to neighbouring cities and are not available for the daily farming activities. The tsunami is reported to have flooded up to 93% of Shichigahama's rice-fields with the salt-water rendering them unusable for a considerable period of time. The long-term implications of this for Shichigahama's farming are unclear.

The Sendai Thermal Power Plant is located in Yogasakihama, Shichigahama. The plant was built as a coal-fired power plant with four generating turbines but has since been converted to run on cleaner natural gas. Three turbines were decommissioned and the fourth was redesigned as a natural gas-powered combined-cycle generator. The building was also redesigned with the coals smoke stacks remove to reduce the visual profile on the scenic Matsushima Coastline. The redesigned plant began operation on July 29, 2010. The plant is owned and operated by Tohoku Electric Power Company. Employees are often transferred from other company plants and relocate to the town either temporarily or semi-permanently.

A handful of factories are located in Toguhama, employing townspeople as well as workers from neighbouring Shiogama and Tagajo. The most notable are the Sony Supply Chain Solutions Centre, Yochan Foods Factory.

Shichigahama is not served by any railway stations or national highways. The nearest rail stations are Tagajō Station or Geba Station on the JR East Senseki Line

This article is issued from Wikipedia - version of the 12/19/2015. The text is available under the Creative Commons Attribution/Share Alike but additional terms may apply for the media files.