The Eyüp Sultan Mosque (Turkish: Eyüp Sultan Camii) is situated in the Eyüp district of Istanbul, outside the city walls near the Golden Horn. The present building dates from the beginning of the 19th century. The mosque complex includes a mausoleum marking the spot where Eyüp (Job) al-Ansari, the standard-bearer and friend of the Islamic prophet Muhammad, is said to have been buried.

A mosque complex (külliye) was constructed on the site in 1458 by the Ottoman Turks only five years after the conquest of Constantinople in 1453.[1] By the end of the 18th century the mosque was in a ruinous state, perhaps as a result of earthquake damage, and in 1798 sultan Selim III ordered the whole structure other than the minarets to be pulled down and rebuilt. This work was completed in 1800. The eastern minaret was rebuilt in the original style by Mahmud II in 1822.[2][3] 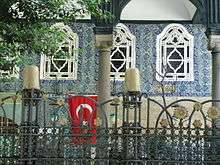 The türbe of Abu Ayyub al-Ansari.

Eyüp Sultan is believed to have died during the first Arab siege of Constantinople in the 670s. His tomb is greatly venerated by Muslims. The mausoleum is on the north side of a courtyard opposite the main entrance to the prayer hall of the mosque.[3]

The mosque was the traditional site for the coronation ceremony of the Ottoman Sultans, where the new sultan was girded with the sword of Osman.[4]

The wall of the mausoleum facing the mosque has a number of contrasting panels of Iznik tiles. They date from several different periods and were brought together during the reconstruction of mosque in 1798-1799.[5] The walls of the vestibule to the mausoleum are also covered in Iznik tiles. They have the characteristic sealing-wax red slip and date from around 1580.[5] Similar tiles to those in the vestibule are displayed in several museums outside Turkey; they probably once covered the walls of the now demolished entrance hall (camekân) to the baths.[6][7][lower-alpha 1]

The British Museum has a panel of three blue and turquoise Iznik tiles, dating from around 1550, that are similar to some of those that now decorate the external wall of the shrine.[14][15]