The Meramec River (/ˈmɛrᵻmæk/) is one of the longest free-flowing waterways in Missouri, draining 3,980 square miles (10,300 km2)[1] while wandering 218 miles (351 km)[2] from headwaters near Salem to where it empties into the Mississippi River near St. Louis at Arnold and Oakville. The Meramec watershed covers six Missouri Ozark Highland counties—Dent, Phelps, Crawford, Franklin, Jefferson, and St. Louis—and portions of eight others—Maries, Gasconade, Iron, Washington, Reynolds, St. Francois, Ste. Genevieve, and Texas. Between its source and its mouth, it falls 1,025 feet (312 m). Year-round navigability begins above Maramec Spring, just south of St. James. The Meramec's size increases at the confluence of the Dry Fork, and its navigability continues until the river enters the Mississippi at Arnold, Missouri. 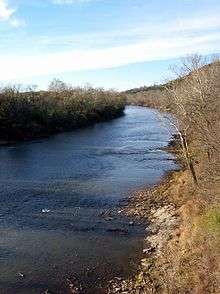 Canoers enjoy a float trip on the Meramec below Leasburg

The first European explorer was French Jesuit priest Jacques Gravier, who traveled the river in 1699–1700. The name likely means 'the river of ugly fishes' or 'ugly water' in Algonquian. Early variant spellings of the name were Mearamigoua, Maramig, Mirameg, Meramecsipy, Merramec, Merrimac, Mearmeig, and Maramecquisipi. Early on, the river became an important industrial shipping route, with lead, iron, and timber being sent downstream by flatboat and shallow-draft steamboat.

Today, the river is used commercially by tourboats and sand and gravel mining barges. It also is used by canoe outfitters and ferry boat excursions. Numerous trails travel along the river and up over the bluffs, giving the hiker a glimpse of ducks, herons, beavers and other species of wildlife which may be seen along the river.

At one time, the river was listed as one of the most polluted rivers in Missouri. Local and state government along the river have taken tremendous steps in cleaning it up. Today the river is one of the most diverse waters in Missouri. The river is plentiful in black crappie, channel catfish, flathead catfish, largemouth bass, paddlefish, rainbow trout, brown trout, rock bass, smallmouth bass, walleye, white crappie, and some of the richest mussel beds in the state. The endangered Eastern Hellbender (Cryptobranchus alleganiensis alleganiensis) also lives in the river.

The Meramec River includes one of only three Red Ribbon Trout Areas in the state of Missouri, hosting healthy rainbow trout and brown trout populations where large springs flowing into the river provide the cool water required by these species. Red Ribbon trout streams are managed by the Missouri Department of Conservation to produce trophy-sized fish.

Maramec Spring is the fifth-largest spring in Missouri. Maramec Spring Park, south of St. James, is the home of an historic iron works and trout fishery. 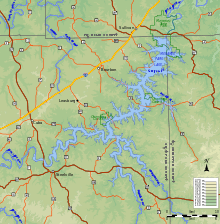 This map shows the extent of the main reservoir that would have been created at Sullivan by the Meramec Basin Project.

The free-flowing Meramec River and several of its tributaries narrowly avoided being impounded by several dams proposed by the Corps of Engineers.[3] The United States Congress authorized several large dams in the upper Mississippi and Meramec river basins in 1938 following severe flooding in 1927 and 1937. World War II intervened, and plans were delayed and altered, but the Meramec Basin Project finally started moving forward in the 1960s. The main dam was to be at Sullivan, Missouri, at Meramec State Park, with several additional dams upstream. These plans ran into opposition from the growing environmental movement of the 1960s and 1970s, as well as from recreational users of the free-flowing Meramec. The failure of the Teton Dam in 1976 increased the public's doubt about the wisdom of the project.

Grass-roots opposition forced politicians originally in favor of the project to reconsider. At the request of Senators Jack Danforth and Tom Eagleton, Missouri Governor Kit Bond allowed a non-binding referendum to be put on ballots in twelve surrounding counties. On August 8, 1978, 64 percent of the voters rejected the dam proposal. The referendum carried no legal weight but caused Congress to reconsider. Under President Jimmy Carter, funding was removed from the project. In 1981, President Ronald Reagan signed the bill de-authorizing the project. This was one of the first times that a Corps of Engineers project was stopped once construction had begun, and it marked a major victory for the American environmental movement.