Mongolian Americans are American citizens who are of full or partial Mongolian ancestry. The term Mongol American is also used to include ethnic Mongol immigrants from groups outside of Mongolia as well, such as Kalmyks, Buryats, and people from the Inner Mongolia autonomous region of China. Some immigrants came from Mongolia to the United States as early as 1949, spurred by religious persecution in their homeland.[6] However, Mongolian American communities today are composed largely of migrants who arrived in the 1990s and 2000s, as communism in Mongolia came to an end and restrictions on emigration were lifted.[2]

The Denver metropolitan area was one of the early focal points for the new wave of Mongolian immigrants.[5] Other communities formed by recent Mongolian immigrants include those in Chicago, San Francisco, and Washington, D.C.[2] Another large Mongolian American community resides in Los Angeles.[7]

The Mongolian community in Denver traces its roots back to 1989, when Djab Burchinow, a Kalmyk American engineer, arranged for three junior engineers from Mongolia to study at the Colorado School of Mines. They were followed by four further students the following year; in 1991, Burchinow also began to urge the Economics Institute at the University of Colorado to admit Mongolian international students as well. By 1996, the University of Colorado's Denver campus had set up a program specifically aimed at bringing Mongolian students to Colorado. The growth in the number of students coincided with an economic boom and a labor shortage in the Denver area; as a result, many Mongolian students in Colorado chose to stay in the state after their graduation. However, a significant number went back to Mongolia as well, to the extent that in 2003 they formed an association of students returned from Colorado. Their influence is seen in other ways as well; the name of the street the United States embassy resides on is named "Denver Street".[5][8] As of 2006, Colorado's Mongolian American population was believed to be roughly 2,000 people, according to the director of a community-run Mongolian language school set up by local parents worried about the increasing Americanization of their children.[4]

There are 5,000 people of Mongolian descent in the state of California.[1] As many as 3,000 Mongolian immigrants are estimated to live in the San Francisco Bay Area's East Bay cities of Oakland and San Leandro; they began settling in the area only after 2002, and as a result their presence was not reflected at all in the 2000 Census. Many live in predominantly Chinese American and Vietnamese American neighborhoods; tensions arose between the newcomers and the established immigrant communities, and some fights among Mongolian American and other Asian American youths have broken out as a result.[9] In one major incident, a Mongolian immigrant girl was shot dead in a confrontation between Southeast Asian and Mongolian youths in an Alameda park on Halloween night in 2007.[10][11] Four members of the former group were convicted of first-degree murder: three of the boys were tried in juvenile court and sentenced to seven years in prison in 2008, while the shooter was tried as an adult and sentenced to 50 years to life in state prison in 2010.[12][13]

There is also a Mongolian immigrant population in Los Angeles, estimated at about 2,000 people as of 2005, according to local community leader Batbold Galsansanjaa. They have close ties to the city's Korean American community: most community members live and work in Koreatown. A Korean who had previously worked in Mongolia as a Christian missionary established Los Angeles' only Mongolian-speaking church in Koreatown, while a Mongolian Buddhist congregation gathers for worship at the nearby Korean Buddhist Kwan-Um Temple.[14]

The Mongolian embassy to the United States estimated Arlington, Virginia's Mongolian population at 2,600 as of 2006; they were reportedly attracted to the area by the high quality of education. As a result of their presence, Mongolian has become the local school system's third-most widely spoken language, after English and Spanish; 219 students of Mongolian background are enrolled in the local school system, making up 1.2% of all students, but often forming a majority in ESL classes. Members of the first generation largely come from university-educated backgrounds in Mongolia, but work at jobs far beneath their qualifications after moving to the United States. Community institutions include an annual children's festival and a weekly newspaper.[3]

The Chicago metropolitan area's Mongolian American community is estimated at between 3,000 and 4,000 people by local leaders; they are geographically dispersed but possess well-organized mutual support networks. Some have established small businesses, while others work in trades and services, including construction, cleaning, housekeeping and food service.[2] In 2004, Lama Tsedendamba Chilkhaasuren, an expatriate from Mongolia, came to the Chicago area for a planned stay of one year in an effort to build a temple for the area's Mongolian Buddhist community.[15] As of 2010, there are nearly 200 people of Mongolian descent living in Skokie, Illinois. 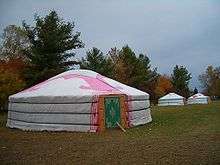 On the grounds of Tibetan Mongolian Buddhist Cultural Center in Bloomington, Indiana

As of 2013, there were 1361 international students of Mongolian origin studying in the United States.[19] 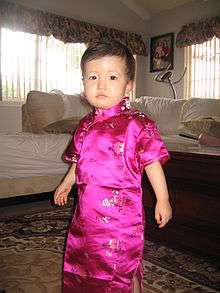 The Mongol-American Cultural Association (MACA) was created to preserve and promote Mongol culture in the United States. MACA understands the term Mongol to be inclusive of the people and cultures of all regions where Mongol groups have traditionally lived; in addition to Mongolia, it includes the people and cultures of Kalmykia, Buryatia, Tuva and the Mongol regions of China. MACA was founded in 1987 by the late Professor Gombojab Hangin, Indiana University, and Tsorj Lama, former Abbot of the Qorgho Monastery in Western Sunid, Southern Mongolia. Since the death of Professor Hangin in 1989, and of Tsorj Lama in 1991, their students have carried on the work they started. Current board members are Tsagaan Baatar, Chinggeltu Borjiged, Enghe Chimood, Tony Ettinger, Palgi Gyamcho and Sanj Altan. MACA was formally incorporated as a 501C3 non-profit organization in 1992.

MACA also pursues a humanitarian program. In 1994, MACA sent $10,000 worth of insulin to Mongolia. MACA was an early supporter of the Peace Corps programs in Mongolia with their English language instructional materials needs. In 1995, MACA established the Mongolian-Children's Aid and Development Fund (MCADF) which functioned as the fund raising and executive arm of the various humanitarian initiatives aimed at providing aid to Mongolian children. Former Secretary of State James A. Baker III serves as honorary chairman of the advisory board to the MCADF. The MCADF has provided nutritional aid and clothing to orphanages and provided small stipends to selected orphans. From 2004–08, the MCADF sponsored the Night Clinic operated by the Christina Noble Foundation, which provides medical services to the street children of Ulaanbaatar. MACA is a primary sponsor of the Injannashi Fund, which provides small educational grants to students in Southern Mongolia. MACA also provides small grants from time to time to cultural and educational institutions to support cultural events related to the Mongolias. In 2011, the MCADF provided a grant to assist the Wildlife Conservation Fund with its 'Trunk' program in Mongolia, which aims to educate school age children on the importance of wildlife and environment.

MACA holds a Chinggis Qan ceremony annually, a continuation of the Chinggis Qan memorial held in the Ezen Qoroo region of Ordos. This ritual was started in the United States by teachers Gombojab Hangin and C'orj'i Lama in 1988, and is held annually in late fall. In 1999, to mark the 10th anniversary of the death of Professor Gombojab Hangin, a Chinggis Qan Symposium was held in his memory, which resulted in the publication of the proceedings with articles from scholars from Mongolia, Southern Mongolia, Buryatia and Kalmykia. In 2012 MACA celebrates 25 years of the ceremony in the United States.

MACA is open to all individuals who share a common belief in the importance of preserving Mongol culture in the United States.