Bangladeshi Americans are expected to grow rapidly in the coming years, as emigration from Bangladesh to the United States continues to increase.

Bangladeshis have been migrating to the port cities of the United States since 1974 when 154 Bangladeshi arrived in United States leaving behind the hard economic and political times of the still developing Bangladesh who got independence from Pakistan in 1971.Most were workers on the various ships docking from Calcutta, India and hailed especially from the Sylhet, Chittagong and Noakhali regions.

Immigration to the United States from Bangladesh grew slowly but steadily from the 1970s-80s. Over ten thousand Bangladeshis have immigrated to the United States annually.[3] Many of the migrants settled in urban areas such as New York City and Paterson, New Jersey; as well as Washington, D.C., Los Angeles, Boston, Chicago, and Detroit. In New York, it was estimated that 15,000 Bangladeshis resided in the city in the early 1980s. During the late 1970s, some Bangladeshis moved from New York City to Detroit, home to prominent communities of other Muslim Americans, in search of better work opportunities and an affordable cost of living,[6] but most have since returned from Detroit to New York and to Paterson, New Jersey. The community formed newspaper organizations. The Los Angeles Bangladesh Association was created in 1971, and there were 500 members of the Texas Bangladesh Association in 1997. The Bangladeshi population in Dallas was 5,000 people in 1997, which was large enough to hold the Baishakhi Mela event. Baishakhi Mela events have been held in major American cities such as New York City, Paterson in New Jersey, Washington, D.C., and Los Angeles, as the Bangladeshi population continues to increase in these cities.[7] Many of these Bangladeshis were taxicab drivers, while others had white-collar occupations.[8] 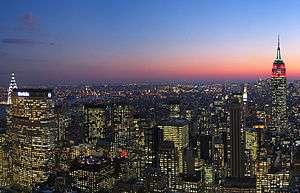 The New York City Metropolitan Area is home to by far the largest Bangladeshi population in the United States.[9][10][11]

The 2000 census undertaken by the Census Bureau listed 57,412 people identifying themselves as having Bangladeshi origin.[12] Almost 40% of Bangladeshis over the age of 25 had at least a bachelor's degree as compared to less than 25% of the United States population.

Since the 1970s, thousands of Bangladeshis were able to legally migrate to the USA through the Diversity Visa Program/ lottery. Many initiated a migration to Jamaica, Queens. Continuous movement of Bangladeshis to Jamaica and Jackson Heights, Queens has made some neighborhoods extensively Bangladeshi. Centering on 169 street and Hillside Avenue, the neighborhood has become a popular zone due to the large number of restaurants and groceries. Sagar Restaurant, Gharoa, Deshi Shaad, Kabir's Bakery, and other stores in Queens are attractions for the Bangladeshi communities all over New York City. The largest numbers of Bangladeshi Americans now live in Jamaica, Jackson Heights, Hollis, and Briarwood in Queens. Bangladeshi enclaves in Queens and Brooklyn have been increasing as Bangladeshis in NYC continue to grow rapidly. Bangladeshis form one of the fastest growing Asian ethnic groups in NYC as new enclaves in areas such as City Line and Ozone Park have sprung up.[13] Wealthier Bangladeshis have been moving to Long Island, New York, as a particular reason for popular settlement in the area is the pharmaceutical companies existing on Long Island; there are quite a large number of Bangladeshi-owned pharmaceutical companies in Nassau County and Suffolk County on Long Island employing many people of Bangladeshi origin. New York statistics: 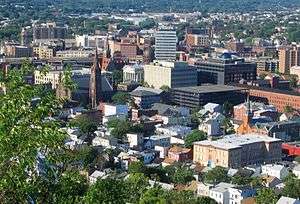 Paterson, New Jersey , in the New York City metropolitan area, is home to a significant Bangladeshi American population, estimated at 15,000,[17][18] the second largest after New York City. Many Bangladeshi grocery stores and clothing stores are locating in the emerging Little Bangladesh on Union Avenue and the surrounding streets in Paterson, as well as a branch of the Sonali Exchange Company Inc., a subsidiary of Sonali Bank, the largest state-owned financial institution in Bangladesh. Masjid Al-Ferdous is also located on Union Avenue, which accommodates Paterson's rapidly growing Bangladeshi pedestrian population in Paterson. Mohammed Akhtaruzzaman was ultimately certified as the winner of the 2012 city council race in the Second Ward, making him northern New Jersey's first Bangladeshi-American elected official.[19] On 11 October 2014, the groundbreaking ceremony for the Shohid Minar Monument in West Side Park in Paterson took place, paying tribute to people killed in Pakistan in 1952 while protesting that country's policies that banned Bangladeshis from speaking their Bangla (বাংলা) language, and replicating those monuments that exist in Bangladesh, according to the World Glam Organization, the Bangladeshi cultural group working on the Paterson project. This project reflected the increasing influence of Paterson's growing Bangladeshi community, as reported in The Record.[20]

The majority of Bangladeshi immigrants are between 10 and 39 years of age; 62% are men. Mainly men immigrated due to employment opportunity differences. Approximately 50% of men and 60% of women are married upon arrival to the United States. Statistics show that Bangladeshis tend to vote for the Democratic Party.[21]

Bangladeshi Americans retain a strong ethnic identity but are known to assimilate into American culture while at the same time keeping the culture of their ancestors. Bangladeshi Americans are well represented in the fields of medicine, engineering, business, finance and information technology. Bangladeshi Americans have brought Bengali cuisine to the United States, and Bengali cuisine has been established as one of the most popular cuisines in the country with hundreds of Bengali restaurants in each major city and several similar eateries in smaller cities and towns. There are many Bangladeshi markets and stores in the United States. Some of the largest are in New York City, Paterson, New Jersey, Central New Jersey, Washington, D.C., and Los Angeles.

The majority of Bangladeshis belong to the Sunni sect of Islam. In smaller towns in America where there may not be mosques within easy access, Bangladeshi Americans make trips to attend the nearest one on major religious holidays and occasions. However, most are in large urban centers where there are vibrant mosques run by Bangladeshis.

Although most Bangladeshi Americans are Muslims, there are also Hindus within the community and they form an important part of the cultural mosaic of Bangladesh as well as the diaspora. They have done equally well. They have a tightly knit community yet have a peaceful relationship with Bangladeshi Muslims. There are a few temples and religious congregations in the United States operated by Bangladeshi Hindus. Since their numbers are low and they often have relations with the majority of Bengali Hindus, who migrated to India after the Partition of India, they are often part of the larger social group of Bengalis from West Bengal and other parts of India and elsewhere.

Similar to other ethnic groups in the USA, a growing proportion of Bangladeshi Americans are non-religious, secularist, atheist, humanist or of similar denomination. 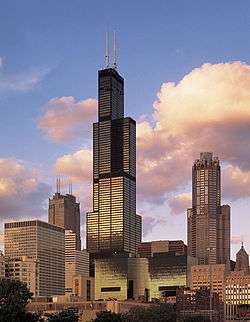 Sears Tower (now Willis Tower), was designed by Fazlur Rahman Khan. It was the tallest building in the world for over two decades.