Taiwanese Americans (Chinese: 臺灣裔美國人) are Americans who have full or partial Taiwanese heritage. This includes American-born citizens who descend from migrants from Taiwan. According to the 2010 U.S. Census, 49% of people who consider themselves Taiwanese live in the state of California. New York and Texas have the second and third largest Taiwanese American populations, respectively.[1]

Prior to the 1950s emigration from Taiwan (then called Formosa) was negligible.[2] In 1600, 98% of the population on the island was Taiwanese aborigines. Dutch occupied southwestern Taiwan between 1624 and 1662, while Spanish occupied northwest Taiwan between 1626 and 1642. In the 17th and 18th centuries the island served as a destination point for migrating Han Chinese, primarily Hoklo and Hakka, from Fujian and Guangdong. Due to Qing dynasty policy, women and children were prohibited to emigrate to Taiwan, thus a large number of Han Chinese took aboriginal brides. Some plains aboriginals also adopted Chinese customs and language,[3] assimilating into the Han population.[4] A recent DNA study show that 85% of current Taiwan population has the mix of indigenous and Han Chinese heritage. In 1895, pursuant to the Treaty of Shimonoseki between the Qing dynasty and Empire of Japan, full sovereignty over Taiwan was ceded in perpetuity to Japan.

In 1945, Japanese rule ended due to Japan's loss in World War II. In 1949, the Chinese Communist Party took control of mainland China, and 2 million refugees, predominantly from the Republic of China (ROC) Nationalist government, military, and business community, fled to Taiwan.

Because of the Cold War, the United States continued to recognize the Kuomintang-led ROC as the sole legitimate government of all of China from 1949 until 1979. As a result, immigration from Taiwan was counted under within the same quota for both mainland China and Taiwan. However, because the People's Republic of China (PRC) banned emigration to the United States until 1977, this quota for immigrants from China was almost exclusively filled by immigrants from Taiwan. After the national origins system was relaxed and repealed by the Immigration and Nationality Act of 1952 and 1965, many Taiwanese people came to the United States, forming the first wave of Taiwanese immigration. Their entry into the United States was facilitated by the Immigration and Nationality Act of 1965, which created a system in which persons with professional skills and family ties in the United States were given preferential status, regardless of the nation of origin.

In 1979, the United States broke diplomatic relations with the ROC, while the Taiwan Relations Act gave Taiwan a separate immigration quota from that of the PRC.

Before the late 1960s, immigrants from Taiwan to the United States tended to be "mainland Chinese" who had immigrated to Taiwan with the Kuomintang after the fall of mainland China to the Communists. Later immigrants tended to increasingly be native Taiwanese, whose ancestors had lived on Taiwan before 1949. With improving economic and political conditions in Taiwan, Taiwanese immigration to the United States began to subside in the early-1980s.

Taiwanese culture places a high value on education, and many Taiwanese Americans are very highly educated and hold advanced degrees from numerous prestigious universities around the United States. They often engage in high-end occupations such as doctors, lawyers, engineers, accountants, professors, and scientists. In addition, Taiwanese Americans occupy positions in the aerospace, defense, research, academic, and health care sectors. Several distinguished academics, including Nobel Prize winners, are Taiwanese Americans. Among Taiwanese Americans, medicine is regarded as particularly high status for historical reasons. During Japanese rule (1895-1945), Taiwanese were barred from politics and administration but were encouraged to become doctors and teachers, leading to this profession being regarded as a high status means of social advancement.[5][6][7]

According to the 2009 U.S. Census, Taiwanese American men had one of "the highest year-round, full-time median earnings" with a figure of $76,587, and Taiwanese American women had a median income of $51,307. They also have one of the highest median incomes among any ethnic minority in United States with a figure of $68,809, which is roughly 37% percent above the national average. They have one of the lowest poverty rates in nation with a figure of 9.5% compared to 11.3% for the general American population but the figure was slightly higher than for all Asian Americans which stood at 9.1%.[9]

Many Taiwanese immigrants have not settled in the old Chinatowns because they do not speak Cantonese. Instead, they have generally immigrated directly to American suburbia and in effect, they started new Taiwanese communities. For example, beginning in the late 1970s and early 1980s at the height of Taiwanese immigration, the Taiwanese emigrants were instrumental in the development of Monterey Park, California in Los Angeles - thus causing it to earn the moniker of "Little Taipei" and derisively as "Mandarin Park" - and vicinity and in Flushing, New York, which generally reflected new investments and capital flowing from Taiwan into newer Taiwanese enclaves instead of the well-established and mostly dilapidated Chinatowns.

While Monterey Park is no longer the major Taiwanese community in Los Angeles today, Flushing remains the main vibrant Taiwanese cultural, commercial, and political center in New York City. In Los Angeles County, California, newer communities such as Rowland Heights, Hacienda Heights, Arcadia, San Marino, Diamond Bar, Walnut, San Gabriel, Temple City, give the ambience of "Little Taipei." However, many annual Taiwanese cultural events (especially during Taiwanese Heritage Week) are still held in Monterey Park. As an attempt to duplicate the Taiwanese success of Monterey Park in Houston, Texas, Taiwanese immigrant entrepreneurs pioneered in the mid 1980s what is now widely considered as Houston's new Chinatown on Bellaire Boulevard (although many Vietnamese-born Chinese immigrants have increasingly settled and set up shop in the area as well). A number of Taiwanese American businesses and organizations still operate and flourish in this part of Houston.

Similarly, for the past 10 years, Taiwanese have been immigrating to upscale neighborhoods in Los Angeles and Orange County such as Cerritos and Irvine respectively. The city of Cerritos is located in Los Angeles County but borders Orange County and has a large diversity of Asian immigrants. The city of Irvine has a very large Taiwanese population, though now more and more Mainland Chinese immigrants have flocked to the city. The Irvine Chinese School, which serves mostly the American-born children of Taiwanese immigrants, is one of the largest Chinese Schools in the Orange County area. These immigrants belong to branches from some of the most politically and economically powerful Taiwanese families (with the surnames Chiang, Chen, Cheng, Kung, Tsai, and Wu).

Convenient Taiwanese-oriented strip malls and shopping complexes are typically complete with supermarkets and restaurants, thus Taiwanese American suburbanites have very little need to visit the older Chinatowns. In addition, shops offering imported Taiwanese goods allow for young Taiwanese expatriates in the United States to keep up with the current trends and popular culture of Taiwan. Taiwanese Americans have also brought with them Taiwanese cuisine to the communities they have settled, which, possibly excluding bubble tea, is not generally well known or served outside these aforementioned Taiwanese immigrant enclaves.

Taiwanese Americans have also gradually increased their political engagement in the public sphere of the U.S. in recent years.

The first Taiwanese church in North America, the Winfield Reformed Church in Woodside, New York, was established in 1969.[11]

The Taiwanese also run several of North America's major Chinese-language newspapers, such as the World Journal and the Chicago Chinese News. However, these influential and highly circulated newspapers are not geared solely to the Taiwanese, but also serve a broader Chinese-speaking immigrant readership. Pacific Journal is a weekly Taiwanese-run newspaper that is geared more exclusively toward Taiwanese readers.

Connection to citizenship of Taiwan

In the 1960s, many Taiwanese Americans chose to make America their permanent home and had children in the U.S. Many sought refuge from the numerous arrests and executions of the White Terror of the Kuomintang. By the late 1970s, improving economic conditions in Taiwan slowed the rate of immigration. During the 1990s, political liberalization in Taiwan encouraged many who had left Taiwan for political reasons to return.

Although the oath of naturalization for the United States contains a statement renouncing "allegiance and fidelity" to other countries, Taiwan, the Republic of China does not recognize this renunciation as sufficient to end Taiwan, ROC citizenship, and requires that a person who wishes to renounce ROC citizenship make another oath before an ROC consular officer and get approval from the Ministry of the Interior,[12] subject to denial for certain reasons.[13] Without the formal renunciation, the ROC government considers Taiwanese emigrants with American citizenship to continue to be citizens of the ROC. Acquiring US citizenship does not cancel the holder's status as a citizenship of ROC, which makes Taiwanese Americans still eligible to vote in the ROC elections, provided that they physically travel to their place of residency. 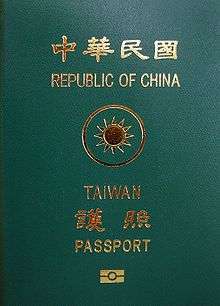 Passport of the United States

Connection to politics of Taiwan

Politically, Taiwanese Americans play a fairly active role in the politics and culture of the country, aided in large part by recognition of dual citizenship. The identity politics of Taiwan also influences at least first generation Taiwanese Americans. Many Kuomintang officials including Ma Ying-Jeou received graduate degrees in the United States. The United States was also a major destination for anti-Kuomintang figures such as Peng Ming-min and Tsai Throng-rong, where they were effectively exiled. Still others including Nobel Prize laureate Yuan T. Lee were educated in the United States.

The close connection between Taiwan and the United States has led to some interesting political dynamics. From time to time, the issue of loyalty to Taiwan is raised. For example, the fact that the President of the Republic of China Ma Ying-Jeou has sisters and a daughter who are American citizens was raised during the 2008 election campaign. James Soong has been criticized for having extensive property holdings in the United States and for the fact that his children are American citizens. Several legislators and government officials from KMT have been controversially alleged to have permanent U.S. residency status or U.S. citizenship without renouncement while serving in public office. Similarly, this has been raised as an issue in the feud between Li Ao and Yuan T. Lee, whose children are also American citizens. This issue is partly one of socio-economic status as people with extensive connections with the United States are considered richer and more privileged than the average Taiwanese.

However, this issue has not become a large part of Taiwanese political discourse largely because links with the United States are so extensive on both sides of the political spectrum, that no one can use this issue to their political advantage. Both the pan-Blue coalition and pan-Green coalition rely on Taiwanese Americans for votes. In the 2004 ROC Presidential Election an estimated 10,000 Taiwanese Americans traveled to Taiwan to vote in an election in which the margin of victory was 30,000, and both groups campaigned extensively in the United States and held campaign rallies in Taiwan to welcome their voters from near and far.

While dual citizens are banned from high political office,[14] there has not been a significant movement within Taiwan to ban dual citizenship in general. Taiwan's Supreme Court has ruled that all citizens, dual or singular, are entitled to the same rights. US natural born citizens were emphasized in the decision.