Hinduism in the United States

Hinduism is a minority religion in the United States; American Hindus in 2008 accounted for an estimated 0.5% of total US population.[1] In 2015, American Hindus accounted for an estimated 0.8% of the total US population, representing an increase of roughly one million people.[2] The vast majority of American Hindus are immigrants from India, Nepal, Sri Lanka, Bhutan, Bangladesh, Afghanistan, Pakistan, Myanmar, Indonesia, the Caribbean (namely Trinidad and Tobago, Guyana, Suriname, and Jamaica), Fiji, South Africa, and Mauritius and other countries and their descendants. Additionally, the United States has a number of converts to Hinduism.

Currently, Hindu-Americans hold the highest education levels among all religious communities in the United States, though this is mostly due to immigration policies that favor educated Hindus.[3][4] Many concepts of Hinduism, such as karma, reincarnation and yoga, have entered into mainstream American vernacular.[5] For example, 24% of Americans believe in reincarnation, a core concept of Hinduism.[6]

The United States Department of State's International Religious Freedom Report 2004 found some 1.5 million adherents of Hinduism, corresponding to 50% of the total population. The Hindu population of USA is the world's eighth-largest; 10% of Asian Americans are followers of the Hindu faith.[7]

Anandibai Joshi is believed to be the first Hindu woman to set foot on American soil, arriving in New York in June 1883 at the age of 19. She graduated with an MD from the Women's Medical College of Pennsylvania on 11 March 1886, becoming the first female of South Asian origin to graduate with a degree in Western medicine from the United States. Kadambini Ganguly, another Indian woman, graduated as a physician the same year (1886) becoming the first South Asian female physician, trained in Western medicine in India, to graduate from South Asia. Joshi returned to India in late 1886.[10] 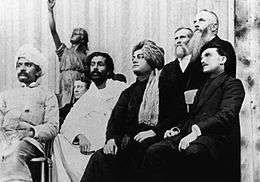 One of the first major discussions of Hinduism in the United States was Swami Vivekananda's address to the World's Parliament of Religions in Chicago in 1893. He spent two years in the United States, and lectured in several cities including Detroit, Boston, and New York. In 1902 Swami Rama Tirtha visited the US for about two years lecturing on the philosophy of Vedanta.[11] In 1920 Paramahansa Yogananda was India's delegate at the International Congress of Religious Liberals held in Boston.

Prior to 1965, Hindu immigration to the United States was minuscule and isolated, with fewer than fifty thousand Indians immigrating before 1965. It is worth noting that although most of these immigrants were Punjabi Sikhs, they were incorrectly and derogatorily referred to as "Hindoo" by many Americans, as well as in some official immigration documents.[12] The Bellingham Riots in Bellingham, Washington on September 5, 1907 epitomized the low tolerance in the USA for Indians and Hindus. In the 1923 case United States v. Bhagat Singh Thind, the Supreme Court ruled that Thind and other South Asians were not "free white persons" according to a 1790 federal law that stated that only white immigrants could apply for naturalized citizenship.[13] The Immigration Act of 1924 prohibited the immigration of Asians such as Middle Easterners and Indians. This further prevented Hindus from immigrating to the United States.[14] Despite such events, some people, including professionals, stayed and worked until the Immigration and Nationality Services (INS) Act of 1965 was passed. This opened the doors to Hindu immigrants who wished to work and start families in the United States. It included Hindu preachers as well, who spread awareness of the religion among the people who had little or no contact with it.

Also during the 1960s, Hindu teachers found resonance in the US counter-culture, leading to the formation of a number of Neo-Hindu movements such as the International Society for Krishna Consciousness founded by Swami Prabhupada. People involved in the counter-culture such as Ram Dass, George Harrison, and Allen Ginsberg were influential in the spread of Hinduism in the United States. Ram Dass was a Harvard professor known as Richard Alpert and after being fired from Harvard was receiving a lot of media coverage. He traveled to India and studied under Neem Karoli Baba and came back to the west as a Hindu teacher and changed his name to Ram Dass which means servant of Ram (one of the Hindu gods). A student of Ram Dass, Jeffery Kagel, devoted his life to Hinduism in the sixties and is now making many CDs chanting the sacred mantras or spiritual verses. He has been very successful and is considered the rock star of yoga. George Harrison was a member of The Beatles which in its peak of popularity was receiving more media coverage than any other band in the world. He became a devotee of Swami Prabhupada who is the founder of ISKCON (mentioned above). George Harrison started to record songs with the words "Hari Krishna" in the lyrics and was widely responsible for popularizing Hinduism in America with the younger generation of the time. Allen Ginsberg, the author of Howl, became a figure in the sixties that was also heavily involved with Hinduism and it was said that he chanted "Om" at The Human Be-in of 1967 for hours on end. Other influential Indians of a Hindu faith are Chinmoy and Maharishi Mahesh Yogi.

A joint session of the United States Congress was opened with a prayer in Sanskrit (with some Hindi and English added), read by Venkatachalapathi Samudrala, in September 2000, to honour the visit of Indian Prime Minister Atal Bihari Vajpayee. The historic gesture was an initiative by Ohio Congressman Sherrod Brown who requested the US Congress House Chaplain to invite the Hindu priest from the Shiva Vishnu Hindu Temple in Parma, Ohio.[15] Another Hindu prayer was read in the United States Senate on July 12, 2007, by Rajan Zed, a Hindu chaplain from Nevada.[16] His prayer was interrupted by a couple and their daughter who claimed to be "Christian patriots", which prompted a criticism of candidates in the upcoming presidential election for not criticizing the remarks.[17] In October 2009, President Barack Obama lit a ceremonial Diwali lamp at the White House to symbolise victory of light over darkness.

According to the Bhutan New Service 75,000 exiled Bhutanese refugee have been resettled in USA since 2008 (As per the date of April 8, 2014) and many more Bhutanese refugee are resettling in United State of America continuously. Hinduism is the major religion of Bhutanese refugees who resettle in USA.[18]

Main article: List of Hindu temples in the United States 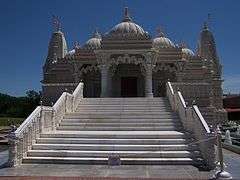 The Vedanta Society was responsible for building some early temples in USA starting in 1906, but they were not formal temples. Earliest traditional Hindu temple in the United States is Shiva Murugan Temple, Concord, CA (1957)[19] known as Palanisamy Temple, it is one of the few temples that is run by public by elected members. The Maha Vallabha Ganapathi Devastanam owned by the Hindu Temple Society of North America in Flushing, New York City was consecrated on July 4, 1977. This temple recently underwent significant expansion and renovation.[20]

Today there are over 450 Hindu Temples across the United States,[21] spread across the country, with a majority of them situated on the east coast centred around the New York region which alone has over 135 temples [22] the next largest number being in Texas with 28 Temples [23] and Massachusetts with 27 temples.[24]

Other prominent temples include the Malibu Hindu Temple, built in 1981 and located in Calabasas, is owned and operated by the Hindu Temple Society of Southern California. The temple is near Malibu, California. Apart from these, Swaminarayan temples exist in several cities across the country with a sizable following.

The oldest Hindu Temple in Texas is the Shree Raseshwari Radha Rani temple at Radha Madhav Dham, Austin.[25] The temple, established by Jagadguru Shree Kripaluji Maharaj is one of the largest Hindu Temple complexes in the Western Hemisphere,[26] and the largest in North America.[27][28][29]

In Tampa, South Florida, Sri Vishnu Temple is established before about 160 years 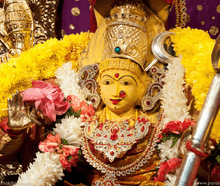 Parashakthi Temple[30] in Pontiac, Michigan is a tirtha peetam in the west for Goddess "Shakthi" referred to as the "Great Divine Mother" in Hinduism. The Temple was envisioned by Dr. G Krishna Kumar in a deep meditative kundalini experience of "Adi Shakthi" in 1994.[31]

Sri Somesvara Temple opened in May, 2011 in Clyde, North Carolina. It is located near Asheville, North Carolina in the heart of Mount Soma, a Vastu community in the Blue Ridge Mountains. The temple was built to help people live true to their innate spirituality and uphold the purity of the Vedas.[33] Sri Somesvara Temple is run by a Vedic pandit who performs Vedic ceremonies there daily.[33][34]

There are many Hindu temples in the United States, and too many to be listed.