Burmese Americans (Burmese: မြန်မာနွယ်ဖွား အမေရိကန် [mjəmà nwɛ̀bwá ʔəmèjḭkàɴ]) are Americans of full or partial Burmese ancestry. The term encompasses people of all ethnic backgrounds with ancestry in present-day Myanmar (or Burma).[2] They are a subgroup of Asian Americans. The majority of Burmese Americans are of Chinese descent, particularly Teochew, Hokkien, and Yunnanese.[3]

The first Burmese to study in the United States was Maung Shaw Loo, who came in 1858 to study at the University at Lewisburg (now Bucknell University) in Pennsylvania. He graduated with a medical degree in 1867 and returned the following year.[4]

The first major wave of immigration from Myanmar occurred in the 1960s, after Ne Win established military rule in 1962, to the late 1970s. Most who immigrated were primarily those with Chinese origins, who arrived in increasing numbers following the 1967 anti-Chinese riots.[5] The Burmese Chinese were the first major group of Theravada Buddhists to immigrate to the United States and were largely educated professionals, business entrepreneurs and technically skilled workers.[5] A minority were of Anglo-Burmese and Indian descent. Some of the Burmese immigrated to the United States after the Immigration and Nationality Act of 1965 abolished the previously existing quota on Asian immigrants.[6] A second wave occurred during the 1980s to the early 1990s after the national uprising in 1988. This wave consisted of many different ethnic groups, including Bamars, Karens, and those from other ethnic minorities, particularly in search of better opportunities. Among this wave are political refugees numbering a few thousand, who were involved in the 8888 Uprising and are concentrated in Fort Wayne, Indiana.[7] From 1977 to 2000, 25,229 Burmese immigrated to the United States, although the figure is inaccurate because it does not include Burmese who immigrated via other channels or through other third countries.[3] A third wave of immigration, from 2006 to date, has been primarily of ethnic minorities in Myanmar, in particular Karen refugees from the Thai-Burmese border.[3] From October 2006 to August 2007, 12,800 Karen refugees resettled in the United States.[3]

Burmese in far smaller numbers continue to immigrate to the United States today mainly through family sponsorships and the "green card lottery". Thousands of Burmese each year apply to a Diversity Visa Program (previously known as "OP" and now called "DV"), a lottery-based program that grants visas to those who wish to reside in the United States.

According to the 2010 United States Census, 100,200 persons of Burmese descent resided in the United States, an increase of 499% over the previous census, which recorded 16,720 individuals of Burmese descent.[1] Leading up to the census, an awareness campaign was conducted by the Burmese Complete Count Committee, which consisted of Burmese American organizations, to convince Burmese Americans to self-identify as "Burmese" on their census forms.[8] Following the 2010 census, Burmese-Americans are no longer ambiguously categorized as "Other Asian," but in a separate category.[9] 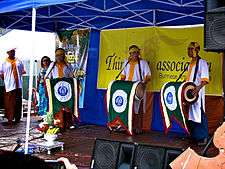 Drummers of the Rakhine minority performing on the Burmese New Year, Thingyan, in New York City

As most Burmese are Buddhists, many Burmese Buddhist monasteries, most of which also serve as community centers, have sprouted across most major cities in the United States. A few ethnic Mon and Rakhine monasteries serve their respective ethnic populations. Burmese Christian churches consisting mainly of ethnic Karen, Chin, Kachin, and Anglo-Burmese congregations can also be found in large metropolitan areas.

English is the primary language for most Burmese Americans, albeit with varying levels of fluency depending on the level of education and the years lived in the country. Burmese is still widely spoken or understood as most Burmese Americans are recent immigrants or first generation children of those immigrants. Still, the command of spoken Burmese among the American-born Burmese is basic to poor, and that of written Burmese is close to none. Some older Burmese of Chinese origin speak some Chinese (typically, Mandarin, Minnan, or Cantonese); likewise some of South-Asian origin speak some Indic language (usually Hindi/Urdu).

Most of these people were born in Myanmar/Burma and grew up in the United States.