As of the 2010 U.S. Census, there are 276,667 people of Cambodian descent living in the United States. The Cambodian population is concentrated in the states of California and Massachusetts.

Prior to 1975, most of the few Cambodians in the United States were children of upper income families or those having government-funded scholarships sent abroad to attend school. There was no history of immigration from Cambodia into the United States. After the fall of Phnom Penh to the communist Khmer Rouge in 1975, a few Cambodians managed to escape, but not until the Khmer Rouge was overthrown in 1979 did large waves of Cambodians began immigrating to the United States as refugees. Between 1975 and 1994, nearly 158,000 Cambodians were admitted into the United States. About 149,000 of them entered the country as refugees, whereas approximately 6,000 entered as immigrants and 2,500 as humanitarian and public interest parolees.[2] In order to encourage rapid assimilation into American culture and to spread the economic impact, the U.S. government settled the refugees in various towns and cities throughout the country. However, once established enough to be able to communicate and travel, many Cambodians began migrating within the U.S. to certain localities where the climate was more like home, where they knew friends and relatives had been sent, or where there were rumored to be familiar jobs or higher government benefits. Consequently, large communities of Cambodians took root in cities such as Long Beach, Fresno and Stockton in California;Providence, Rhode Island; Cleveland, Ohio; as well as Lynn and Lowell in Massachusetts; and Seattle and Portland in the Pacific Northwest.

In Northern California, Stockton, Modesto, and Oakland have significant Cambodian populations, while San Jose, Santa Rosa and Sacramento have sizable communities as well. Outside of California, the Pacific Northwest is home to another large Cambodian settlement, specifically in cities such as Tacoma, where Cambodians enumerate at thousands, or 1.6% of the population.[3][8] There are also growing Cambodian American communities in Las Vegas, Nevada; Phoenix, Arizona; Salt Lake City, Utah; and Denver, Colorado, as the Asian American population continues to rapidly increase in Nevada, Arizona, Utah, and Colorado. 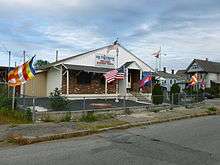 Glory Buddhist Temple, one of many examples of Cambodian-American culture in Lowell, Massachusetts

Aside from personal memoirs of coming to America, such as those by Loung Ung, a few books have been dedicated to studying the Cambodian American population in the U.S., such as Khmer American: Identity and Moral Education in a Diasporic Community by Nancy J. Smith-Hefner. This book is an anthropological study of Khmer refugee families, largely from the perspective of the parental generation, residing in metropolitan Boston and eastern Massachusetts. This book was one of the early books among the few circulating that talks about this diasporic community. It exhibits some understanding of both traditional Khmer culture and contemporary American society but it is not a historical study of Khmer Americans. A more recent book is Buddha Is Hiding, written by Aiwha Ong, an ethnographic study that tells the story of Cambodian Americans and their experiences of American citizenship. The study primarily investigated Khmer refugees in Oakland and the San Francisco Bay Area. The experiences portrayed in the book exemplify what most Cambodian refugees face when dealing with American institutions such as health care systems, welfare, law, police force, church, and school. The book reveals, through extensive ethnographic dialogues, how Cambodian refugees interpret and negotiate American culture, often at the expense of their own Theravada Buddhist cultural upbringing.

Survivors: Cambodian Refugees in the United States, written by Sucheng Chan, is a multidisciplinary study of Cambodian Americans drawing on interviews with community leaders, government officials, and staff members in community agencies as well as average Cambodian Americans to capture perspectives from a variety of socioeconomic backgrounds.

According to the 2000 census, Cambodian American populations had a disproportionately low level of education compared to other populations in the United States, with 53.4% of Cambodian Americans over the age of 25 not possessing a high school diploma – compared to the average of American society as a whole at 19.6% lacking a high school diploma.[13]

In 2014 it was reported that Cambodia Town, Long Beach, California, the only officially recognized ethnic enclave of Cambodian Americans, had a poverty rate of 32.4%.[16] This was a little over twice the average of America society as a whole which stood at 16% according to a 2011 study by the government.[15]

Cambodians faced many difficulties upon settling in the United States, such as possessing few transferable job skills, not knowing how to speak English, and having experienced trauma as refugees. These factors greatly impacted overall household income after resettlement. Many refugees arrived with a lack of formal education, since the educated and professional classes were targeted during the Khmer Rouge genocide. This contributed to the difficulty in learning to speak English and in assimilating to the American educational system.[17]

It was estimated in 1990, a mere five years after the majority of Cambodians arrived in the US,[18] that nearly 81% of Cambodians in America met the criteria for major affective disorder (which encompasses depression and generalized anxiety), accounting for the largest subgroup of Southeast Asians afflicted by mental health problems at the time.[19]

One study conducted among Cambodian Americans residing in Long Beach, California, found that 13.0% of the adult respondents were current cigarette smokers. When broken down by gender, 24.4% of smokers included in the study were male and 5.4% of smokers were women. The prevalence of smoking was found to be higher in Cambodian American males than in other males residing in California. Additionally, smoking rates are estimated to be higher among Cambodian Americans than among other Asian American groups, with the prevalence of cigarette smoking among the aggregate Asian population in the U.S. around 9.6% (with men and women combined).[20]

Main article: Deportation of Cambodians from the United States

The Personal Responsibility and Work Opportunity Reconciliation Act (PRWORA), which was signed into law by President Bill Clinton in 1996, resulted in many legal immigrants losing federal aid they had been receiving from the Social Security Administration. This especially affected Cambodian immigrants and other Southeast Asians, who at the time were the largest per capita race or ethnic group receiving public assistance in the United States. Under the Indochina Migration and Refugee Assistance Act of 1975, many Southeast Asian refugees were placed on federal welfare rolls as a temporary measure in order to integrate them into United States society, but by the time PRWORA passed they had been stripped of their refugee status. However, in 1996, nearly 80 percent of California's Southeast Asian population was either living in poverty and/or welfare-dependent. Because of this, the welfare cuts under PRWORA had a large impact on Cambodian Americans and other citizens of Southeast Asian descent. This is a contributing factor to the high poverty rates of Cambodian Americans that still exist today, and have existed since the first major wave of Cambodian refugees emigrated to the United States in 1975.[21]

Another common phenomenon experienced by some Cambodian American refugees is a lack of familiarity with the history of their homeland. This is prevalent among refugees who were young children when they emigrated to the United States and are now adults. Because of their age, they are not able to remember or understand the historical developments in Cambodia that led to their family's migration. The quality of historical education in American public schools contributes to this unfamiliarity, as well as the resistance by older refugees to discuss the horrors witnessed in Cambodia.[22]