(video) A Nao robot at the Fêtons Linux in Geneva, Switzerland, in October 2011. 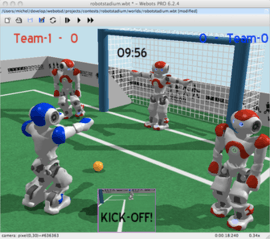 Nao (pronounced now) is an autonomous, programmable humanoid robot developed by Aldebaran Robotics, a French robotics company headquartered in Paris. The robot's development began with the launch of Project Nao in 2004. On 15 August 2007, Nao replaced Sony's robot dog Aibo as the robot used in the RoboCup Standard Platform League (SPL), an international robot soccer competition.[1] The Nao was used in RoboCup 2008 and 2009, and the NaoV3R was chosen as the platform for the SPL at RoboCup 2010.[2]

Several versions of the robot have been released since 2008. The Nao Academics Edition was developed for universities and laboratories for research and education purposes. It was released to institutions in 2008, and was made publicly available by 2011. Various upgrades to the Nao platform have since been released, including the 2011 Nao Next Gen and the 2014 Nao Evolution.[3][4]

Nao robots have been used for research and education purposes in numerous academic institutions worldwide. As of 2015, over 5,000 Nao units are in use in more than 50 countries.[4]

Aldebaran Robotics was established in 2005 by Bruno Maisonnier, who had previously begun developing the robot under "Project Nao" in 2004.[4] Six prototypes of Nao were designed between 2005 and 2007. In March 2008, the first production version of the robot, the Nao RoboCup Edition, was released to the contestants of that year's RoboCup.[5] The Nao Academics Edition was released to universities, educational institutions and research laboratories in late 2008.

In the summer of 2010, Nao made global headlines with a synchronized dance routine at the Shanghai Expo in China.[6] In October 2010, the University of Tokyo purchased 30 Nao robots for their Nakamura Lab, with hopes of developing the robots into active laboratory assistants.[7] In December 2010, a Nao robot was demonstrated doing a stand-up comedy routine,[8] and a new version of the robot was released, featuring sculpted arms and improved motors. In May 2011, Aldebaran announced that it would release Nao's controlling source code to the public as open source software.[9] In June 2011, Aldebaran raised US$13 million in a round of venture funding led by Intel Capital.[10] In 2013, Aldebaran was acquired by Japan's SoftBank Mobile for US$100 million.[11]

Since 2011, over 200 academic institutions worldwide have made use of the robot, including the University of Hertfordshire and their Bold Hearts RoboCup Team, the Indian Institute of Information Technology, Allahabad, the University of Tokyo,[7] the Indian Institute of Technology Kanpur,[12] Saudi Arabia's King Fahd University of Petroleum and Minerals, and Montana State University.[13][14] In 2012, donated Nao robots were used to teach autistic children in a UK school; some of the children found the childlike, expressive robots more relatable than human beings.[15][16] In a broader context, Nao robots have been used by numerous British schools to introduce children to robots and the robotics industry.[17]

By the end of 2014, over 5,000 Nao robots were in use with educational and research institutions in 70 countries.[4] In 2015, Mitsubishi UFJ Financial Group began trialling Nao robots for customer service use in its Japanese bank branches.[18] In July 2015, Nao robots were shown to demonstrate a basic form of self-awareness in a philosophical experiment at Rensselaer Polytechnic Institute in New York.[19] In September 2015, the French Institute of Health and Medical Research used Nao robots to test a system of robotic "autobiographical memory" designed to help train International Space Station crews and assist elderly patients.[20]

Nao is available as a research robot for schools, colleges and universities to teach programming and conduct research in to human-robot interactions.[21]

The various versions of the Nao robotics platform feature either 14, 21 or 25 degrees of freedom (DoF). A specialised model with 21 DoF and no actuated hands was created for the Robocup competition. All Nao Academics versions feature an inertial measurement unit with accelerometer, gyrometer and four ultrasonic sensors that provide Nao with stability and positioning within space. The legged versions included eight force-sensing resistors and two bumpers. The most recent version of the robot, the 2014 Nao Evolution, features stronger metallic joints, improved grip and an enhanced sound source location system that utilises four directional microphones.[4]

The Nao robot is controlled by a specialised Linux-based operating system, dubbed NAOqi.[4] The OS powers the robot's multimedia system, which includes four microphones (for voice recognition and sound localization), two speakers (for multilingual text-to-speech synthesis) and two HD cameras (for computer vision, including facial and shape recognition). The robot also comes with a software suite that includes a graphical programming tool dubbed Choregraphe,[22] a simulation software package and a software developer's kit. Nao is furthermore compatible with the Microsoft Robotics Studio, Cyberbotics Webots, and the Gostai URBI Studio.[23]