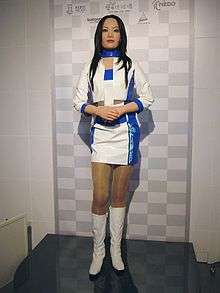 By its enthusiasts, robot fetishism is more commonly referred to by the initials "ASFR". This initialism stems from the now-defunct Usenet newsgroup alt.sex.fetish.robots. Many devotees of this fetish refer to themselves as technosexual,[2][3] or as "ASFRians".[1] ASFR can be divided into two distinct but sometimes overlapping types of fantasies.[2][3][4]

The first of these is simply a desire to have a ready-made android partner. This partner can be desired for sex, companionship, or any combination of the two. The main distinguishing feature of this fantasy is that the android is a completely artificial construct, often manufactured solely to fulfil the wishes of its owner. This type of fantasy or situation is referred to as "built".[1][3][5]

The second type of fantasy prevalent within ASFR is referred to as "transformation". This involves a human who has been either willingly or unwillingly turned into an android. That person can be either oneself or one's partner, or both. It is usually the process of transformation (through whatever means it is achieved) that is the focus of this fantasy.[1][3][5]

Many people in the ASFR community prefer either one or the other.[2][3][5] In some cases this preference is very strong, and people can be as equally repelled by one type as they are attracted to the other. In other cases, there is as much appreciation for built as there is for transformation.[4] A recent informal survey of ASFR community members found that two thirds prefer built while the remainder prefer transformation or some combination of both.[6] 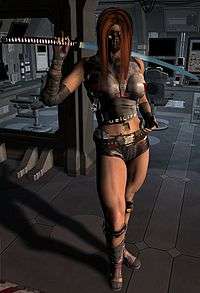 An example of ASFR art.

The aspects of this fetish that are most appreciated by members of the ASFR community are greatly varied. For some, things like robotic appearance, motion, or sound are important for arousal.[2] For others, these are not, and a completely lifelike android that appears to be human is desired.[4] This holds true for other aspects, such as sentience or self-awareness. The ability of the android to remove parts of its skin or other bodily appendages in order to reveal its circuitry is quite pleasing to some, but distasteful to others.[4] There is a further divide between those who prefer an android to appear human-like and those who would prefer a more mechanical looking robot, i.e. with a metallic surface.

As realistic androids and humanoid robots do not currently exist in a form readily available to the consumer,[2] this fetish can only be acted upon in a limited number of ways. Primarily this is done through fantasy, involving either self stimulation or sexual roleplaying with a partner.[4] ASFR art is therefore important to aid in the reinforcement of imagination.[1]

Art with ASFR content includes but is not limited to science fiction movies, music videos,[7] television shows, novels, short stories, illustrations, manipulated photographs, songs and even television commercials.[8] Such works are sought after by technosexuals since economically viable androids are not yet available. Realistic sex dolls such as the RealDoll remain the only concrete way to fully explore this fetish. However, recent developments in robotics and artificial intelligence, such as those seen in the Actroid or EveR-1 can only lead to the production of more advanced synthetic partners.[1][2]

It is also worth noting that some ASFRians do not wish to use synthetic partners at all, and instead would prefer human partners to participate in forms of fantasy play.[4]