The Ohio Senate is the upper house of the Ohio General Assembly, the state legislature of the U.S. state of Ohio. The State Senate, which meets in the Ohio Statehouse in Columbus, first convened in 1803. Senators are elected for four year terms, staggered every two years such that half of the seats are contested at each election.[1] Even numbered seats and odd numbered seats are contested in separate election years. The President of the Ohio Senate presides over the body when in session, and is currently Keith Faber. 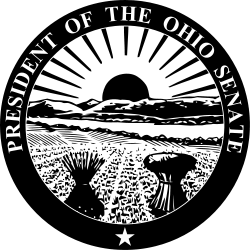 Seal of the President

Clerk: According to the Rules of the Senate, the Clerk is elected by the members of the Senate and is tasked with maintaining records of all Senate bills and resolutions. The Clerk is also responsible for handling all documents received from other government departments. [2]

Members of the 131st Senate