The IAI Stadium Nihondaira (IAIスタジアム日本平, pronounced as I-A-I) is a football stadium in Shimizu-ku, Shizuoka, Japan. It is currently mostly used for football matches and has been the home stadium of the J-League's Shimizu S-Pulse since 1993. The stadium holds 20,339 people and was opened in 1991. In November 2008 a four-year naming deal effective from March 2009 was announced expected to earn S-Pulse 360,000,000 yen. The stadium was known as The Outsourcing Stadium until February 2013.[2] As Shizuoka City and Shimizu S-Pulse reached a 5-year deal with IAI Corporation, a manufacturer industrial robots, the stadium has been renamed as IAI Stadium Nihondaira effective 1 March 2013.[3]

The stadium first opened in 1991 with two stands and a capacity of 13,000. In its debut year the stadium was used to host the football tournament of the annual All Japan High School Athletics Meet. Subsequent expansion took place before the first J-League season in 1993 which added two more stands and took the capacity up to 18,500. Since then, the ground has been further expanded with the current capacity standing at 20,339. Future expansion is far from impossible, although limited access to the stadium is the biggest hurdle towards a further enlarged capacity.

At the start of the 2007 season a new Astro Vision giant video screen was unveiled in the southeast corner of the ground. 2007 also saw S-Pulse host all home league games at Nihondaira for the first time since 1999. In previous years, the team's higher profile games were often hosted at higher capacity arenas; most commonly Ecopa Stadium. 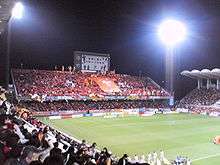 The Kop (West Stand) as seen from the Main Stand for the visit of Kashima Antlers, April 2007

The stadium is composed of four separate, all-seated stands:

The Kop is home to S-Pulse's most vociferous and colourful supporters, with the presence of a supporters band each home game helping create a carnival atmosphere. Half the opposite East Stand is usually given over to visiting fans, although on occasion the whole stand is provided for away fans such as for the local derby against Jubilo Iwata. With the exception of the more central areas of the side stands, all seats at Nihondaira are unreserved. 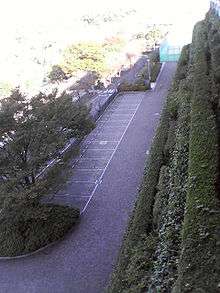 A distinctive feature of the ground is the roof of the Back Stand, and there are several competing theories as to why it runs only two-thirds of the pitch. The most popular of these purports it was intentionally built short so as to afford unobscured views of Mt. Fuji across Suruga Bay. However, the reality is that an access road behind the stand has prevented the laying of the foundations necessary to support the roof.[4] Redirecting this access road would take substantial redevelopment of the surrounding road layout which has thus far not proved a worthwhile expense.

The stadium is located behind a residential area in Shimizu Ward, Shizuoka on the edge of the Nihondaira mountains which divide Shizuoka City. The stadium is surrounded on two sides by green tea fields and due to its elevated position provides panoramic views across Shimizu and Suruga Bay.

The nearest station to the stadium is Shimizu, however, being over 4 km from the ground, the majority of spectators arrive on foot or by shuttle bus services from Shimizu Station, Shizuoka Station and other nearby areas. The shuttle bus service starts running three hours before kick off, but for supporters wishing to arrive earlier, the local bus lines have services which run near Nihondaira, with the closest bus stops to be found ten minutes walk from the stadium. The nearest Shinkansen station is ten minutes by local train west of Shimizu at Shizuoka. There is limited car parking at the stadium or surrounding areas.

From the 2008 season, the stadium is staffed from 11pm the night prior to match days to allow eager supporters the opportunity to reserve their place in the queue.