Since the J. League's creation and introduction of professional Japanese football in 1993, Kashima have proved by far Japan's most successful club team, having won the J. League title a record eight times, the J. League Cup a record six times and the Emperor's Cup four times for an unprecedented total of seventeen major domestic titles. Kashima have finished in the top five of the league for over seventy percent of all seasons played to date, recorded an average end of season league placing of third and captured a major domestic title in over sixty percent of all seasons played to date.

Kashima are also one of only two teams to have competed in Japan's top flight of professional football every year since its inception.

Inside the Kashima Soccer Stadium 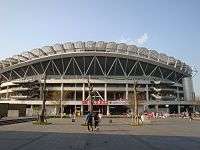 Outside the Kashima Soccer Stadium

The name ‘Antlers’ is derived from the city of Kashima, which literally translates to ‘Deer Island’. The club crest not only resembles deer antlers but it also reflects the image of rose thorn as it is the official flower of Ibaraki, the home prefecture of the club. Deer are amiable animals and are viewed in some religions as spiritual messengers. In fact, Kashima Shrine, one of the most famous shrines in Japan and located in close proximity to the club headquarters, have kept and raised deer for more than 1,300 years as spiritual symbol. Deer are affectionate animals but are also known for their courageous character as they battle each other head to head with lethal antlers.

Founded in 1947 as Sumitomo Metal Industries Factory Football Club in Osaka. It played in the semi-professional Japan Soccer League and moved to Kashima, Ibaraki Prefecture in 1975. They were promoted to the JSL's top flight in 1984, but never made much of an impact, going down in 1985/86, returning in 1986/87 and going down again in 1988/89. Its last standing in the JSL was 2nd in the Second Division for 1991/92.

After the formation of the fully professional J. League, Sumitomo, like all other clubs, stripped the corporate brand from the team name and reformed as the Kashima Antlers. Kashima was essentially promoted to the new top flight, as many JSL First Division teams decided to relegate themselves being unprepared for professionalism. (Of the original 10 J. League founding member clubs, Kashima and Shimizu S-Pulse were newly promoted. Ironically, Kashima had defeated a forerunner of Shimizu's, Nippon Light Metal/Hagoromo Club, to earn its JSL Second Division place back in 1974).

Since the J. League's creation and introduction of professional Japanese football in 1993, Kashima have consistently been amongst the strongest teams in the country, holding several distinctions and records. Led by former Brazilian star and Japanese national team coach Zico in the team's formative years, Kashima were the first team to win a J. League stage, claiming the 1st stage of the inaugural season in 1993. This laid a platform for continuous greatness and long after the Kashima icon had departed, in 2000 Kashima became the first J. League team to achieve the "treble", by winning all three major titles: J. League, J. League Cup, and Emperor's Cup in the same year.

To this day, Kashima has maintained strong ties with the football community in Brazil, a fact borne out of Zico's past affiliation with the club. Kashima's Brazilian connection has manifested itself in both the club's player transfer and coaching policy resulting in only three non-Brazilian foreign players and predominantly Brazilian managers signing for Kashima since the inception of the J. League.

The population of Kashima city is a mere 60,000 and for that reason club has also adopted the surrounding cities of Itako, Hasaki, Kamisu, Namegata and Hokota as its official hometowns, all in Ibaraki Prefecture. The combined population of five cities is 280,000. Antlers home games are played at Kashima Soccer Stadium, one of the 2002 FIFA World Cup venues with capacity of 40,000.

The team plays at the Kashima Soccer Stadium.

The following players have been selected by their country in the World Cup, while playing for Kashima Antlers:

The following players have represented their country at the Summer Olympic Games whilst playing for Kashima Antlers: