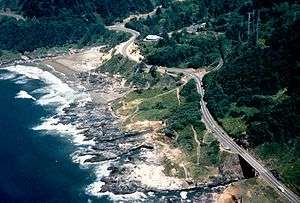 The shape of coastlines can be influenced by biological processes

This can include not only microorganisms and plants, but animals as well. These interactions are very important factors in the development of certain environments like salt marsh, mangrove and other types of coastal wetlands as well as influencing coastal and shoreline stability (Reed, D.J. 2000). There are three main processes related to biogeomorphology; bioerosion, bioprotection, and bioconstruction (Naylor, Larissa A. 2005). Bioerosion refers to the erosion of ocean substrates by living organisms. Bioprotection refers to the protection of substrate from various forms erosion by the presence of organisms, and the structures they create (i.e. coral reefs). Finally bioconstruction refers to the physical construction of biological structures on ocean substrate (Naylor, Larissa A. 2005). Marine biota interact with landform processes by building structures, accumulating carbonate sediments, accelerating erosion by boring or bioturbation, and marine plant life contribute to shoreline stability, especially in marsh and wetland environments (Bernal P., and P.M. Holligan 1992). The interaction between marine biota and geologic processes is very important to shoreline stability, especially in soft sedimentary environments where sediments are more likely to erode away. Benthic, and planktonic organisms, as well as Shellfish filter, package, and even bind fine sediments together in tidal regions. This action reduces turbidity in the area by solidifying and protecting loose, soft sediments, and thus allowing for more colonization by other organisms. If disturbance of these soft sediments occurs, particularly through human interaction like shellfish harvesting, dredging, or the introduction of toxins the environment may drastically change. If this occurs, and marine biota are removed from the environment, erosion can occur, or increase, especially in regions prone to wave action and tidal resuspension (Bernal P., and P.M. Holligan 1992).

Naylor, Larissa A. (2005) The contribution of biogeomorphology to the emerging field of geobiology. Palaeogeography, Palaeoclimatology, and Palaeoecology 219(1-2):35-51