A defensive midfielder with tackling ability and workrate as his main assets,[1] he played for two of the major three teams in his country, amassing top division totals of 284 games and 16 goals over the course of 11 seasons, and also spent four years in Spain. He represented the Portuguese national team in one World Cup and one European Championship.

Bento took up a coaching career in 2005, managing Sporting for four years and four months, with relative success, and also being in charge of the national team in two major tournaments.

Born in Lisbon, Bento played professionally in his homeland for C.F. Estrela da Amadora, Vitória de Guimarães and S.L. Benfica, and had a four-year abroad spell with Real Oviedo, helping the Spanish club always maintain its La Liga status before moving to Sporting Clube de Portugal, where he finished his career as a player.[2] With the latter, he was part of the star-studded team that achieved the double in 2002 under the direction of Laszlo Bölöni, contributing with 31 games and one goal in the Primeira Liga and playing alongside Mário Jardel and João Vieira Pinto among others.

Bento gained 35 caps for the Portuguese national team, his first game coming on 15 January 1992 in a 0–0 draw with Spain and his last being the 0–1 loss to South Korea on 14 June 2002 in the 2002 FIFA World Cup. He also played at UEFA Euro 2000 where, along with teammates Abel Xavier – who played with him at Oviedo for two seasons – and Nuno Gomes, he was suspended (in Bento's case for five months) due to bad behaviour, during the semi-final loss with France.[3]

After an emotional 2004 retirement, aged 35, Bento got the job of Sporting's youth team coach. He won the junior championship in 2005, and developed a base to the future. After the sacking of José Peseiro midway through 2005–06 season, he was promoted to first-team duties in spite of being relatively inexperienced.[4]

Despite a slow start, Bento managed an impressive turnaround of Sporting's fortunes in the second half of the campaign, as a series of ten consecutive wins placed them within distance of leaders and eventual league champions FC Porto, as the former went on to rank second in that and the following seasons, achieving direct qualification to the UEFA Champions League. He was responsible for bringing youth products Nani, João Moutinho and Miguel Veloso into the spotlight.

In June 2007, Bento signed a two-year contract extension.[5] Sporting had a turbulent pre-season in preparation for 2007–08, with defense mainstays Rodrigo Tello and Marco Caneira leaving the club while Portuguese international goalkeeper Ricardo was sold to Real Betis. With little resources to invest, the club brought Eastern promises – Marat Izmailov, Vladimir Stojković and Simon Vukčević – aboard.

After a very irregular season, Bento managed to lead Sporting to an unprecedented third consecutive qualification for the Champions League, with another second-place finish in spite of spending most of the year below third place, pipping Guimarães and Benfica in the final matchday. He also retained the Taça de Portugal, beating Porto in the final (2–0 after extra time) after knocking-out eternal rivals Benfica in the last-four stage with a 5–3 triumph.

Bento's team broke a number of long-standing club records, including the first season without home defeats since 1987, the first capture of back-to-back Portuguese cups since 1974 and the first time since 1962 that Sporting finished three consecutive campaigns in the top two league positions. At the age of 38, he also became only the fifth manager in the history of Portuguese football to win back-to-back Portuguese cups, alongside the likes of Janos Biri, John Mortimore or José Maria Pedroto.

On 15 July 2008, The Sun and The Daily Telegraph reported that Manchester United were planning to hire Bento (reportedly Cristiano Ronaldo's friend and former teammate) as manager Alex Ferguson's new assistant after the departure of previous number two Carlos Queiroz to manage the Portuguese national team.[6] He quickly denied any speculation, and reaffirmed his intention to stay at Sporting.[7]

On 16 August 2008, Bento managed Sporting to a 2–0 victory in the Supertaça Cândido de Oliveira over champions Porto, at the opening of the new season.[8] One of the players that were kept in the team despite heavy criticism, Rui Patrício, was a key element and saved a penalty from Lucho González during the second half;[9] this win raised the manager's tally in cup finals against counterpart Jesualdo Ferreira to 3–0 (2007 and 2008 Supercups, and the 2008 Portuguese Cup),[10] and it also marked the first ever capture of back-to-back Portuguese Supercups in the Lions' history, thus adding to the list of records broken during his tenure.

Already the second-most successful coach in the history of the club in terms of trophies won, only surpassed by Josef Szabo, Bento gained the nickname "Papa-Taças" (roughly translated as "cup-eater") as a consequence of the four pieces of silverware added to Sporting's cabinet under his command.[11] 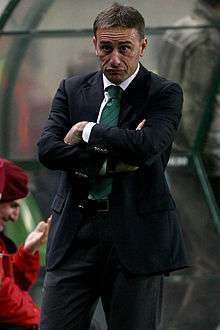 Bento as Sporting manager in 2009

On 4 November 2008, Bento led Sporting to a 1–0 home win over FC Shakhtar Donetsk, therefore mathematically securing automatic qualification for the knockout stages of the Champions League for the first time in their history. In the process, his team also broke the club's record number of points in UEFA's main competition (nine) and remarkably did so with two matches to spare, becoming the first team to qualify from the group phase (alongside FC Barcelona, from the same group).[12][13]

Later, Bento also lead Sporting to break the record for most goals suffered by a team in a Champions League knockout round, after a 1–12 aggregate ousting at the hands of FC Bayern Munich at the round-of-16. In the league, another second place to Porto befell, with the season also featuring the controversial Taça da Liga final loss against Benfica, on penalties.[14]

That Champions League ousting marked the beginning of fan discontentment towards Bento, especially regarding the team's playing style (which was perceived as becoming dull and unattractive)[15] as presidential elections were to be held. Supported by the winning candidate José Eduardo Bettencourt, he signed a two-year contract extension; in spite of maintaining the same base squad and adding the talent of Felipe Caicedo or Matías Fernández, Sporting was unable to start the new campaign brightly: knocked out in the Champions League playoff round by ACF Fiorentina on away goals,[16] the side's form slumped quickly and after nine matches they found themselves mired in seventh place, 12 points behind leaders S.C. Braga.

After a 1–1 home draw in group stage against FK Ventspils on 5 November 2009, and facing considerable pressure to step down, Bento resigned.[17][18] 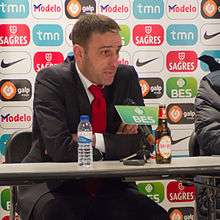 On 20 September 2010, following Queiroz's dismissal after a poor start to the Euro 2012 qualifying campaign, Bento was named his successor, initially until the last match of that stage.[19] His first game in charge came on 8 October, a 3–1 win against Denmark in Porto.[20]

On 17 November 2010, Portugal defeated World Cup champions Spain 4–0 in Lisbon, imposing the largest defeat to its Iberian neighbours since 13 June 1963 (2–6 against Scotland, in another friendly).[21] He led the national team to the Euro 2012 semi-finals in Poland and Ukraine, where they narrowly lost to eventual champions Spain on penalties.[22]

After a second-place finish in Group F in the 2014 World Cup qualifiers, Bento led Portugal to a 4–2 aggregate win over Sweden in the playoffs, securing a spot at the finals in Brazil.[23] On 9 April 2014, he extended his contract until after Euro 2016,[24] but the national team exited in the World Cup's group stage in spite of a 2–1 success against Ghana in the last match, with the United States progressing on goal difference instead.[25]

On 11 September 2014, after the Euro 2016 qualifying campaign began with a 0–1 home defeat to Albania, the Portuguese Football Federation announced Bento's dismissal.[26]

On 11 May 2016, Bento moved abroad for the first time in his managerial career, taking the helm at Brazil's Cruzeiro Esporte Clube.[27] His first game, ten days later, was a 2–2 draw at home to Figueirense FC which continued his side's winless start to the season.[28]

On 25 July 2016, Cruzeiro announced that Bento had resigned from the club following a 1–2 home defeat against Sport Recife.[29][30]