Not to be confused with Caen.
For the annual festival, see Cannes Film Festival.

Cannes (French: [kan], English /ˈkæn/, in Occitan Canas) is a city located on the French Riviera. It is a commune of France located in the Alpes-Maritimes department, and host city of the annual Cannes Film Festival, Midem, and Cannes Lions International Festival of Creativity. The city is known for its association with the rich and famous, its luxury hotels and restaurants, and for several conferences. On 3 November 2011 it also played host to the G20 organisation of industrialised nations.

By the 2nd century BC, the Ligurian Oxybii established a settlement here known as Aegitna (Αἴγιθνα in Ancient Greek). Historians are unsure what the name means. The area was a fishing village used as a port of call between the Lérins Islands. 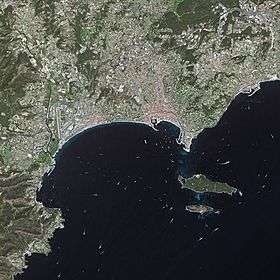 In 69 AD, it became the scene of violent conflict between the troops of Otho and Vitellius.[1]

In the 10th century, the town was known as Canua.[2] The name may derive from "canna," a reed. Canua was probably the site of a small Ligurian port, and later a Roman outpost on Le Suquet hill, suggested by Roman tombs discovered here. Le Suquet housed an 11th-century tower which overlooked swamps where the city now stands. Most of the ancient activity, especially protection, was on the Lérins Islands and the history of Cannes is closely tied to the history of the islands.

An attack by the Saracens in 891, who remained until the end of the 10th century, devastated the country around Canua. The insecurity of the Lérins islands forced the monks to settle on the mainland, at the Suquet. Construction of a castle in 1035 fortified the city by then known as Cannes, and at the end of the 11th century construction was started on two towers on the Lérins islands. One took a century to build.

Around 1530, Cannes detached from the monks who had controlled the city for hundreds of years and became independent.

During the 18th century, both the Spanish and British tried to gain control of the Lérins Islands but were chased away by the French. The islands were later controlled by many, such as Jean-Honoré Alziary, and the Bishop of Fréjus. They had many different purposes: at the end of the 19th century, one served as hospital for soldiers wounded in the Crimean War.

At the end of the 19th century, several railways were completed, which prompted the arrival of streetcars. In Cannes, projects such as the Boulevard Carnot and the rue d'Antibes were carried out. After the closure of the Casino des Fleurs (hôtel Gallia), a luxury establishment was built for the rich winter clientele, the Casino Municipal next to the pier Albert-Edouard. This casino was demolished and replaced by the new Palace in 1979.

In the 20th century, new luxury hotels such as the Carlton, Majestic, Martinez, and JW Marriott Cannes were built. The city was modernised with a sports centre, a post office, and schools. There were fewer British and German tourists after the First World War but more Americans. Winter tourism gave way to summer tourism and the summer casino at the Palm Beach was constructed.

The city council had the idea of starting an international film festival shortly before World War II. The first opened on 20 September 1946, held in the Casino Municipal.

Cannes has a Mediterranean climate (Köppen climate classification Csa) and the city enjoys 12 hours of sunshine per day during summer (May to September), while in winter (December to February) the weather is mild. Both seasons see a relatively low rainfall and most rain occurs during October and November, when 110 mm (4.3 in) falls.

Cannes summers are long and warm, with summer daytime temperatures regularly hitting 30 °C (86 °F), while average temperatures are about 25 °C (77 °F). Temperatures remain high from June to September, the busiest time of the year.

Temperatures drop below 10 °C (50 °F) for only three months of the year (December to February). The spring and autumn are also warm, although more suited to those who prefer slightly cooler weather.

Panorama of the waterfront 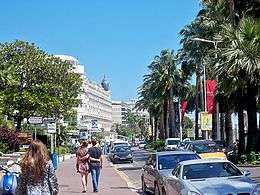 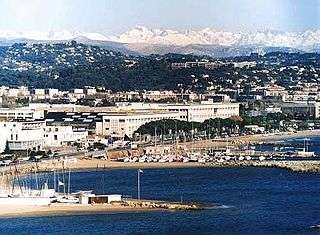 The area around Cannes has developed into a high-tech cluster. The technopolis of Sophia Antipolis lies in the hills beyond Cannes. The Film Festival is a major event for the industry. There is an annual television festival in the last week in September.

The economic environment is based on tourism, business fairs, trade and aviation. Cannes has 6,500 companies, of which 3,000 are traders, artisans and service providers. In 2006, 421 new companies were registered.

The Promenade de la Croisette is the waterfront avenue with palm trees. La Croisette is known for picturesque beaches, restaurants, cafés and boutiques. Le Suquet, the old town, provides a good view of La Croisette. The fortified tower and Chapel of St Anne house the Musée de la Castre. A distinctive building in Cannes is the Russian Orthodox church.

The villas of Cannes

Cannes of the 19th century can still be seen in its grand villas, built to reflect the wealth and standing of their owners and inspired by anything from medieval castles to Roman villas. They are not open to the public. Lord Brougham’s Italianate Villa Eléonore Louise (one of the first in Cannes) was built between 1835 and 1839. Also known as the Quartier des Anglais, this is the oldest residential area in Cannes. Another landmark is the Villa Fiésole (known today as the Villa Domergue) designed by Jean-Gabriel Domergue in the style of Fiesole, near Florence, which may be visited on appointment.

It took the Man in the Iron Mask 11 years to leave this tiny, forested island. The mysterious individual was believed to be of noble blood, but his identity has never been proven. His cell can be visited in the Fort of St Marguerite, now renamed the Musée de la Mer (Museum of the Sea). This museum also houses discoveries from shipwrecks off the island, including Roman (1st century BC) and Saracen (10th century AD) ceramics.

Cistercian monks are the only inhabitants of the smaller, southern St Honorat Island. Monks have inhabited the island since AD 410 and, at the height of their powers, owned Cannes, Mougins, and Vallauris. Medieval vestiges remain in the stark church, which is open to the public, and in the ruins of the 11th-century monastery on the sea shore. The monks inhabit the Lérins Abbey and divide their time between prayer and producing red and white wines.

Cannes is not renowned for traditional theatre. However, small venues stage productions and host short sketches during the annual International Actors’ Performance Festival. Popular theaters include the Espace Miramar and the Alexandre III.

Coach services arrive at the Gare Routière de Cannes, in the centre of the city, near the Town Hall. Companies from abroad include Eurolines and Agence Phoceens. Regional services are by Rapides Côte d’Azur and CTM, with services from Nice and Grasse/Mandelieu respectively. Local bus services are provided by Bus Azur.

Panorama of Cannes Waterfront, from which many ferries can be caught.

Cannes is twinned with:

Cannes has friendship pacts with: