Born in Letterkenny, County Donegal, Deignan first set foot on a bike in 1997 during the annual Sligo to Letterkenny charity cycle organised by Paddy Delap.[3][4] He has been professional since 2005. Before that he was riding for amateur club Vélo-Club La Pomme Marseille where he performed well.

In the Baby Giro (Giro d'Italia for amateurs) of 2004 after recovering from an earlier crash, he performed well on the mountainous stages.[5][6] He won the final stage & overall classification of the 2004 Ronde de l'Isard as an amateur. His first professional road race win was in the Tour du Doubs when he attacked a breakaway group that contained his fellow Irishman and teammate at the time Mark Scanlon.[7] Other notable performances were ninth place in the UCI World Championships Under 23 road race,[8] fifth place in European championship under 23 road race, and second place on a mountainous stage of the 2006 Tour de l'Avenir stage race.[9]

After an injury plagued early season, Deignan entered and finished his first grand tour with the 2007 Vuelta a España, there he finished prominently with 10th, 12th and 16th in several mountain stages.

He qualified to represent Ireland at the 2008 Beijing Olympics.[10][11] He finished in 81st place (15 minutes and 53 seconds behind winner Samuel Sánchez and five minutes behind team mate Nicholas Roche) in the 150.2-mile road race on 9 August. Deignan along with Roche and Roger Aiken made up the Irish team for the 2008 World Championships in Varese on 28 September. None of the three finished the demanding 260 km race.[12] 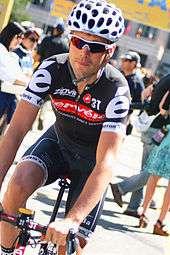 Deignan riding for Cervelo in 2010

For the 2009 season Deignan rode with the Cervélo TestTeam. He raced the Giro d'Italia, achieving a top ten finish in one stage and featuring prominently in others, with his team winning 4 stages in total. On 17 September 2009 he achieved his first grand tour stage victory, in stage 18 of the Vuelta a España into Avila, after a 2-man battle with the Czech Roman Kreuziger of Liquigas. By finishing 10 minutes clear of the peloton he climbed to 9th in the general classification.[13] He became the first Irishman to win a stage on a Grand Tour since Stephen Roche's last-stage success at the Tour de France in 1992.[14][15] Deignan was selected to ride for Ireland in the 2009 World Elite Road Race Championship in Mendrisio, Switzerland (23–27 September) alongside Nicolas Roche and Dan Martin.[16] After his Vuelta performance, Deignan reached a personal high 2009 world ranking of 71st. Deignan was the best Irish finisher when placing 40th at the 2009 UCI Road World Championships – Men's road race in Mendrisio. He ended the 2009 season UCI ranked 75th, with 61 points,[17] which helped Ireland to 16th in the team rankings.

After one season with RadioShack, he signed on with UnitedHealthcare for the 2012 season.[1] Deignan was able to rebuild his career with the US-based squad, winning the Tour of the Gila in 2013, and recording top ten overall finishes in the three biggest US stage races, the Tour of Utah (6th), the Tour of California (9th) and the USA Pro Cycling Challenge (10th).

Subsequently, Deignan announced he was returning to the UCI World Tour in 2014 by joining Team Sky.[2] He rode the Giro d'Italia which began in Belfast and travelled to Dublin in the opening stages. Deignan led Sky at the Tour de Pologne, finishing seventh overall. He also rode the Vuelta a Espana, where he helped Chris Froome to second overall.

Overall Tour of the Gila