Nicolas Roche (born 3 July 1984) is an Irish professional road bicycle racer. He has twice been national champion and has numerous top ten finishes in Grand Tour stages, including stage wins at the 2013 Vuelta a España and the 2015 Vuelta a España. He represented Ireland at the 2008 Summer Olympics in the road race. He has competed for Ireland 7 times at the road world championships.

Roche, who was born in Conflans-Sainte-Honorine, France, is the son of former cycling champion Stephen Roche and his former wife, Lydia, nephew of former cycling professionals Lawrence Roche and Neil Martin and cousin of 2008 Irish road champion Dan Martin. He spent his childhood living in both Ireland and France, living in Dublin from 1996 to 1999, where he was educated at Lycée Français d'Irlande in Foxrock for two years and Blackrock College, a private school in Dublin, for one year. During this period he was a keen soccer and rugby player.[3] He moved to southern France in 1999, where he spent most of life since. He currently resides in Monaco, having previously lived in Varese, Italy until 2013.[3]

He turned professional at the end of 2004, with team Cofidis and became one of the youngest UCI ProTour racers.[4] As his father is Irish and his mother French, Roche had dual nationality as an amateur. In early 2005, Roche was told by French officials to choose between his two nationalities. Roche declared for France as he was planning to spend the rest of his life in France.[5] The loss of Roche was a blow to Irish cycling,[6] as he had won the 2002 Junior Tour of Ireland[7] and finished third in the 2004 Irish Elite championship.[8] However, six months later, the UCI and Cycling Ireland told Roche he was given incorrect information, and that he could compete for Ireland and keep his two nationalities, which he did.[9]

During his first two years, he was often a domestique, but he did get a few good results, mostly in French Cup races. His first win as a professional was a stage in the 2004 Tour de l'Avenir, a race known as a mini-Tour de France for riders under 25.[10][11] He wore the yellow jersey for two days and finished tenth overall. He was in major breakaway in the 2006 World championships in Salzburg, Austria.[12] Soon after, he signed a two-year contract with Crédit Agricole on the back of his many good results this season.

In 2007, Roche rode the Giro d'Italia. In June, he won the Irish National Time Trial Championships (CN) in Dungarvan.[13] He came also fourth in the Road Race Championship. Due to injury, Roche withdrew from the Tour of Ireland and missed the World Championship.

Roche had planned 2008 for the Giro d'Italia but organizers RCS did not invite his team. He changed his schedule, and finished sixth in the Tour Ivoirien de la Paix, 15th in Clásica Internacional de Alcobendas in Spain and won a stage[14] in GP Internacional Paredes Rota dos Móveis in Portugal. After finishing seventh of the Tour de Wallonie, he competed in the Beijing Olympic road race, teaming with Philip Deignan, won a stage in the Tour du Limousin, and was then picked for his first Vuelta a España. Roche had good performances in the Vuelta, nearly winning stage 18 into Las Rozas, where he was outsprinted by Imanol Erviti after a 17-man breakaway. Roche had three top-ten and ten top-20 stage finishes, finishing a fine 13th in the general classification, during what was only his second Grand Tour.

Roche along with Deignan and Roger Aiken made up the Irish team for the 2008 World Championship in Varese. Roche was in an early crash and retired. 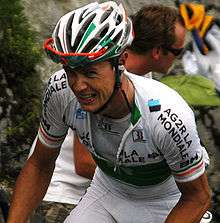 For most part of the year and after a solid performance in the Critérium du Dauphiné Roche was in consideration for the Tour de France team and After winning the Irish National Road Race Championship for the first time in June 2009, it was announced that Roche had been selected by Ag2r to ride his first Tour de France the following month. He had a fine debut Tour, finishing in 23rd place overall and 5th in the points classification. He had five top ten placings in the race and finished 2nd on stage 14.

He was UCI World Ranked 144th at the end of the 2009 season with 15 points, which helped Ireland to 16th place in the nation rankings.

After a good early season, where he finished 10th in Paris–Nice, 5th in the Volta a Catalunya and 2nd in the Irish National Elite Road Race Championships, Roche was chosen as the co-leader of the Ag2r–La Mondiale team in the Tour de France and during the race he wrote articles for the Irish Independent newspaper. Roche finished 15th overall. He could have been a few ranks above had he not lost four minutes to the race leaders because of a flat tyre in stage 15.

After the Tour, Roche finished 8th in the Clásica de San Sebastián and In September, He led AG2R at the Vuelta a España. His performance was even better than during the Tour de France, as he was really close to the best climbers of the race, losing very little time in stages with a mountain top finish. He finished 7th overall however was promoted to 6th overall after Ezequiel Mosquera's second place was annulled. He finished only five minutes and three seconds behind overall winner Vincenzo Nibali. This place was the best in a Grand Tour by an Irishman since 1988. The performance lifted him to 32nd in the year end UCI World Rankings with 148 pts. This helped Ireland to 17th place in the nation rankings (254 points).

Roche was part of the three-man Irish team at the 2010 World Championships in September. 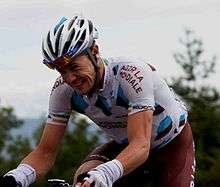 Roche's season was hampered by injuries and crashes, particularly by one in the Critérium du Dauphiné[15] He entered the Tour de France as a team leader again, but quickly realized he had not fully recovered from the crash and could not hope for a good general classification. He got in a number of unsuccessful breaks in the final week, hoping to grab a stage win, and eventually finished 26th overall. He also rode the Vuelta a España, finishing 16th overall.

In October, Roche won the 3rd stage of the inaugural Tour of Beijing.[16][17] This marked his first international victory in three years and his first ever win on the World Tour. He finished the season world ranked 150th with 19 ranking points, thus helping Ireland to 13th in the nation rankings with 319 points.

Roche published a memoir in 2011 called Inside the Peloton. It won that year's Irish Book Award in the Sports Book category.

Roche renounced his French citizenship in 2012, becoming solely an Irish national.[3] He showed some form with top-20 finishes in Paris–Nice and the Tour of California. He finished 10th overall in the Tour de Suisse, and 2nd and 3rd respectively in the National Road Race and Time Trial Championships before riding the Tour de France . Roche moved up to seventh overall on the first mountain stage seven which finished on La Planche des Belles Filles. However he lost time over the time trial on stage nine and rest of the mountain stages. On stage 18, Roche broke clear of the peloton in the last 10 km (6.2 mi) with Luis Leon Sanchez. The pair passed the day's breakaway and looked set to contest the stage win only to for Mark Cavendish to sprint past in the final 200 meters. Roche sat 11th overall heading into the time trial on stage 20 and targeted a top ten finish, but a weak time trial saw him drop a place to 12th. Roche, along with Dan Martin and David McCann, represented Ireland in the Olympic Games Road Race. He then rode the Vuelta a Espana where he had a good start and sat seventh overall by the second week of the race. However, he struggled through the last week of the race and dropped down to 12th overall by the end of the race.

On 1 August, it was announced that Roche would leave Ag2r–La Mondiale at the end of the 2012 season, ending an eight-year association with French-registered teams.[18] He signed a two-year contract with Saxo–Tinkoff for the 2013 and 2014 seasons.[19] 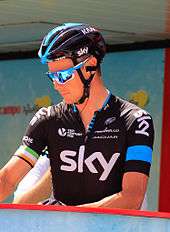 Throughout much of the season with Tinkoff Saxo including the Tour de France, he rode as a domestique for Alberto Contador with few results. After a good performance at the Clásica de San Sebastián finishing 5th, He was given leadership at the Vuelta a España. On 25 August, Roche won stage two of the Vuelta by breaking away with three others on the final climb at the end of the 177 km (110.0 mi) stage from Pontevedra to Alto Do Monte Da Groba.[20][21] Roche held the leader's red jersey after stage 8. He had also held the points classification, mountains classification and combination classification at one stage in the race. On stage 8 Roche lost the jersey finishing eight seconds behind Daniel Moreno to fall one second behind in the general classification. After stage 13 Roche was 2nd overall but on a cold day to Andorra on stage 14 he dropped to 6th overall. He went on to finish 5th overall in the general classification, his best result to date in a Grand Tour.[22][23] Later that year Roche again competed for Ireland in the World Championships and the World Time Trial Championships where he finished 13th.

Roche had few early season results before participating in the Giro d'Italia which started in Ireland and was given the role as co-leader with Rafal Majka. Roche also took part at the Tour de France as a domestique to Alberto Contador. Before the Tour, Roche won the overall classification of the Route du Sud ahead of Alejandro Valverde. He won the queen stage win in the process and also the points classification. This was His first stage race victory and was a race which his father also won in 1985.[24] Roche went in to the Tour of Britain expecting a good result[25] and placed 5th overall.

After a disrupted winter training due to more than one spider infections while riding Roche struggled with few early season results. At the end of April Roche competed in the Tour de Yorkshire looking for a good result. On the final stage Roche attacked a group of favourites alongside Thomas Voeckler where he was beaten in the final sprint to the line. This gave him 2nd place overall in the general classififcation. After this race it was confirmed that Roche would take part in the Giro d'Italia for a third time in his career. Roche started the race as a backup GC rider to Mikel Landa in the first five days of racing where he was placed in the top 10 overall. His form faded over the race but helped his teammate Mikel Nieve win the mountains classification. In June Roche completed the double at the Irish National Cycling Championships winning the time trial ahead of Eddie Dunbar and Ryan Mullen, and winning the road race ahead of Matt Brammeier.