Nordhaug started his career as a mountain biker, but after finishing 5th in the 2004 Norwegian National Road Racing Championship, his focus changed towards road bicycle racing. His breakthrough came two years later, in 2006, when he won the National Road Racing Championship.[1] This year was his breakout year, also winning Birkebeinerrittet, a Norwegian long-distance mountain-bike cycling race. 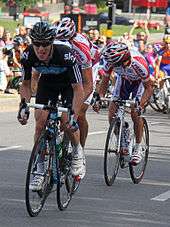 In August 2009, Nordhaug scored a second overall finish on the Tour of Ireland while riding for UCI Continental team Joker–Bianchi. This race was a three-stage event classified as 2.1. His victory in the undulating last stage carried him to that placing, after he got the best of breakaway companion Russell Downing, who won the general classification.[2]

After a week of rumours, it was announced on 10 September 2009 that Nordhaug would be joining Team Sky from the 2010 season, along with fellow Norwegians Edvald Boasson Hagen and Kurt Asle Arvesen.[3] Nordhaug spent the 2010 and 2011 seasons working mainly as a domestique, riding the Ardennes classics and the 2011 Giro d'Italia. He signed a new contract with Sky at the end of 2011.

Nordhaug took his first victory for Sky at the 2012 Trofeo Deia, the third race at the Challenge Mallorca. He shook off the last contenders on the last difficulty of the day, before descending solo and crossing the line in Deia, registering his first victory since 2009.[4] He also rode a good Critérium International event in Corsica, finishing fourth overall behind a strong podium composed of Cadel Evans (BMC Racing Team), Pierrick Fedrigo (FDJ–BigMat) and his teammate Michael Rogers.[5] Nordhaug led Sky at the Tour of the Basque Country, where he came sixth overall.[6] His promising early season form saw him take a prominent role in the team's Ardennes classics squad. Nordhaug was well placed in the closing stages of the Amstel Gold Race but crashed out in the final 300 metres (980 ft) of the finishing climb, the Cauberg, after clashing wheels with Lampre–ISD's Damiano Cunego.[7]

In August 2012, Nordhaug announced that he would leave Team Sky at the end of the 2012 season, and would join Blanco Pro Cycling on a two-year contract from the 2013 season onwards.[8] As a result of his decision, Nordhaug was not selected for the Vuelta a España and instead rode the Danmark Rundt, where he won the third stage, to take the overall lead in the race.

Nordhaug at the 2015 Tour de Suisse

He took his biggest career victory to date at the 2012 Grand Prix Cycliste de Montréal, winning a sprint from a group of four riders after his solo attack was caught in the closing stages of the race.[9]

He made history at the 2015 Tour de Yorkshire, winning the inaugural stage of the new race from a breakaway of five riders.[12] With that move, he took the leader's jersey and points jersey, neither of which he would relinquish, to become the first winner of the race. This was also the first stage race GC won by Nordhaug outside his native Norway.[13]