Born in Rečyca in the Belorussian S.S.R. in 1981, Kiryienka won his first national time trial championship in 2002. His early career focused mainly on the track, where he won the Points Race at the 2008 UCI Track Cycling World Championships. Later that season Kiryienka won Stage 19 of the 2008 Giro d'Italia, a mountainous affair leading to Presolana, after spending the day on the attack and registering more than 6 hours and a half in the saddle. He attacked his six breakaway companions at the foot of the Monte Para climb and soloed to the finish for the win, by a margin of over four minutes.[3] 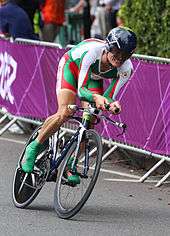 Kiryienka moved to the Spanish Caisse d'Epargne squad for the 2009 season.

In 2010 he finished second in the tenth stage of the 2010 Tour de France after he was outsprinted at the line in Gap by Sérgio Paulinho (Radioshack) after the pair's decisive attack with 14 km remaining.[4]

On 23 May 2011, during the 2011 Giro d'Italia, Kiryienka's Movistar Team team mate Xabier Tondo was killed in a freak accident at home while preparing to train with teammates. He was reportedly crushed between his car and a garage door.[5] Five days later, Kiryienka rode to victory in a solo effort on Stage 20, a mountain top finish at Sestriere, and he dedicated the stage victory to Tondó, pointing skyward as he crossed the finish line.[6] The team had met to consider withdrawing from the race after Tondó's death, but instead the riders unanimously voted to ride on.[7] Kiryienka commented that the squad at the Giro hoped to get a further stage win (as Francisco Ventoso's win had come before Tondó's death) to honor him, while other members of the team grieved with Tondó's family.[8]

In September 2012, Kiryienka finished third in the individual time trial at the road world championships.[9] 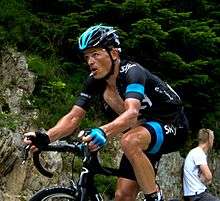 Kiryienka at the 2014 Tour de France

Kiryienka left Movistar Team at the end of the 2012 season, and joined Team Sky on a three-year contract from the 2013 season onwards.[2]