Landa was born in Murgia (Álava), in the Basque Country (autonomous community) in northern Spain. Like many Basque cyclists he began his career at the Orbea Continental development team, in 2009, before graduating to the Euskaltel-Euskadi professional team in 2011. After three years with the Euskaltel–Euskadi squad, Landa left the team at the end of the 2013 season – due to its disestablishment – to join Astana.[2]

Landa won a Stage of the 2014 Giro del Trentino before riding the 2014 Giro d'Italia as one of Fabio Aru's mountain domestiques. He helped Aru to finish third overall.

In 2015, Landa attacked from a breakaway on the final climb of the day to win the fifth stage of his home race, the Tour of the Basque Country.[3] 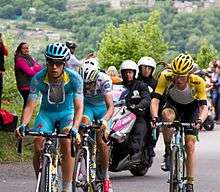 Landa rode the Giro d'Italia, again initially as a domestique for Aru. On Stage 8, the second mountain top finish of the race to Campitello Matese Landa finished second after following an attack by Aru, and then unsuccessfully chasing after leader Beñat Intxausti (Movistar Team) in an attempt to win the stage. By doing so Landa rose to fifth place overall, 42 seconds down on leader Alberto Contador (Tinkoff-Saxo).[4] Landa rose to third overall on Stage 10, when Richie Porte (Team Sky) was given a time penalty for accepting a wheel change from Orica-GreenEDGE rider Simon Clarke.[5] On Stage 14, a 59.4km individual time trial, Landa was caught on the road by Contador, losing over three minutes to him, and dropped to seventh overall, 4 minutes 55 seconds back. However, the next day, Landa won the mountainous Stage 15 after attacking Contador on the final climb, the Madonna di Campiglio, and proving stronger than Aru, who he finished six seconds ahead of.[6] After the race's second rest day on the following stage, Stage 16 was the queen's stage with five Italian Alpine peaks, including the Tonale, Mortirolo and a mountain finish to Aprica. On the first of two climbs to Aprica, Contador suffered a mechanical problem, after which Team Katusha and Astana immediately pressed on the pace at the front, sparking a bit of controversy over respect and fair play.[7] After a long chase Contador eventually caught up with Landa, Aru and Steven Kruijswijk (Team LottoNL-Jumbo) on the Mortirolo after being 52 seconds down at the start of the climb. Contador then counter-attacked, with Landa proving stronger than Aru, who was unable to follow the move. Landa rode away on the final ascent to Aprica, winning his second stage in a row by 38 seconds over Kruijswijk and Contador. Aru finished 2 minutes and 51 seconds behind, and thus Landa moved ahead of his teammate to second overall.[8] However, on Stage 19 it was Aru who proved the stronger of the two, attacking on the final climb to Cervinia and taking 1 minute and 18 seconds on Contador and Landa, who did not respond to his move. On Stage 20, the last mountain stage, Landa attacked on the Colle delle Finestre, taking the Cima Coppi for crossing the highest point of the race in the lead as he crossed the summit with Ilnur Zakarin (Katusha), a minute ahead of Aru and a minute and a half ahead of Contador. However, Landa waited for Aru on the descent, and the pair were unable to take sufficient time from Contador on the remainder of the stage, before Aru attacked on the final climb to Sestriere to win the Stage. Although Contador lost two and a half minutes on what he described as an "off-day", he kept the maglia rosa with a lead of 2' 02" over Aru to win the Giro, with Landa finishing third overall 3 minutes 14 seconds back.[9]

Landa rode the 2015 Vuelta a España again in support of Aru, after Astana's other leader Vincenzo Nibali was disqualified on the 2nd Stage for holding onto a team car. Landa won the mountainous Stage 11 from Andorra la Vella to Cortals d'Encamp from the breakaway, ignoring team orders to drop back and assist Aru.[10] However, Landa did work for Aru during the rest of the race as the Italian traded the race lead with Tom Dumoulin (Giant-Alpecin), and played a key role in the decisive move on Stage 20 when he and Aru dropped Dumoulin on the penultimate climb before being joined by teammates from the breakaway to ride away from Dumoulin, who lost over three minutes and thus the Vuelta to Aru.

After missing several early season races through illness, Landa made his first appearance for Team Sky at the Settimana Internazionale di Coppi e Bartali, in which he finished 11th overall.[12] Landa then rode his home race, the Tour of the Basque Country, where he won the second stage to take the race lead.[13]

Landa led Sky at the Giro del Trentino in his last warm up race before the 2016 Giro d'Italia. He won Stage 2 to take the race lead, and successfully defended it on the following two stages despite attacks from Astana duo Tanel Kangert and Jakob Fuglsang to take overall victory by a single second over Kangert.[14] He was named in the start list for the 2016 Tour de France.[15]